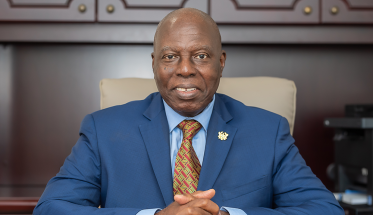 Worcester Polytechnic Institute (WPI) has named His Excellency Barfuor Adjei-Barwuah, former Ambassador of Ghana to the United States, as the university’s inaugural Distinguished Statesman in Residence.  This new position is being launched under the auspices of several programs within WPI that support the university’s global initiatives.

“As a leader in project-based and purpose-driven global education, research, and outreach, WPI actively builds and sustains partnerships around the world,” said Wole Soboyejo, Senior Vice President and Provost. “To do that most successfully, we seek out dynamic and prominent leaders whose skills and passions align with ours and who can greatly enhance our efforts and our impact. Barfuor Adjei-Barwuah’s influence cannot be understated, and his invaluable insights, understanding of complex issues, and keen ability to build consensus through mentorship of students and faculty alike will greatly enhance WPI’s position as a leader and innovator in addressing global challenges. We are delighted to have him join us in this important role that will allow WPI to have an even wider impact.”

Adjei-Barwuah, a native of Ghana, earned a PhD in geography from Indiana University Bloomington in 1972 and was a lecturer at the University of Ghana before becoming the Executive Director of Ghana’s Tourist Board. In 1983, he moved to England to continue his public service in adult education as an advisor to the United Kingdom’s Learning and Skills Development Agency before returning to Ghana in 2001 to continue his public service. From 2002 to 2008, he served as Ghana’s Ambassador to Japan. In 2017, he was appointed by President Nana Akufo-Addo to serve as Ghana’s Ambassador to the United States.

“As a lecturer, a politician, and a diplomat, I have spent a considerable amount of time teaching and sharing skills and insights that I have acquired over the years; this work has remained crucial throughout my career and in my life, and it has allowed me to work successfully with many people to implement solutions to real-world problems,” said Adjei-Barwuah. “I look forward to engaging and interacting with the students and faculty of WPI as yet another opportunity to do what I love best: to share knowledge, my stories, and experiences with others, in order to help others.”

Adjei-Barwuah will engage with students and faculty through the Social Sciences and Policy Studies Department in the School of Arts & Sciences and will interact with the Institute of Science and Technology for Development (InSTeD) and the Provost’s Office. He will also partner with University Advancement to enhance and develop the Provost’s Global Initiatives in Sub-Saharan Africa, particularly in Ghana.

“Barfour Adjei-Barwuah’s experience and leadership are a perfect fit for WPI as it underscores the importance of the humanities and social sciences and policy studies in producing students who truly care about global impact,” said Jean King, the Peterson Family Dean of Arts & Sciences. “The inclusion of more voices to help us ultimately change the world is, without a doubt, not just a passion, but a need. I look forward to working with the former ambassador on a variety of initiatives that will continue to engage both students and faculty in enhancing the overall WPI experience.”

Adjei-Barwuah officially joined WPI this summer and is working on campus full-time this academic year as of August.