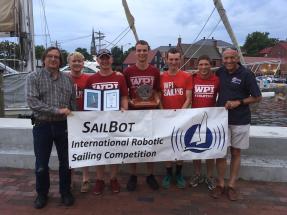 The SailBot competition challenges students to apply their robotics knowledge to develop autonomous boats up to two meters in length that could eventually lead to low-cost oceanographic research vessels used for pollution control and surveillance. 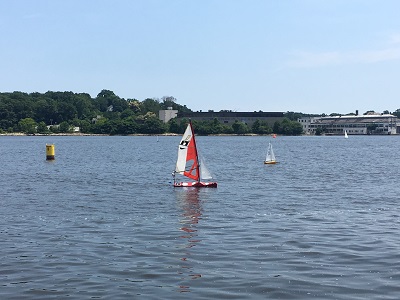 “This was such a gratifying win, knowing that these students have been preparing for this event for close to a year,” said Ken Stafford, director of the WPI Robotics Resource Center and a longtime sailor, who oversaw the WPI team. “The WPI student team showed a lot of skill and excellence in planning and executing on a set of complex autonomous robotic challenges.”

In addition to securing first place overall honors, the WPI team took first place in the station keeping and collision avoidance categories, and first place in its oral presentation. The team came in second in the long distance race and third in fleet racing.

Stafford said the long distance race was the most challenging. “To have the boat sail continuously around the bay without operator input is really tough,” he said. “The team had to deal with battery life issues, water intrusion, and sensor degradation.”

The WPI team evaluates a winch sensor issue on the
sailboat.

“The challenge events were incredibly competitive this year and the level of overall competition was as high as I’ve ever seen it,” said Miller. “The lead changed three times and wasn’t decided until the last day.”

Stafford agreed, adding that the team tweaked implementation details every night after competitions. “The WPI skillset of actually making stuff work—whether it was vision-processing or boat aero- and hydrodynamics—kept us in the game and competitive.”

The team was co-advised by William Michalson, WPI professor of electrical and computer engineering, an expert in navigation and communications.

In addition to the WPI team at the event, several other WPI students helped construct the boat last year. They are 2017 graduates Kelsey Regan of Winchendon, Mass., Dean Schifilliti of Ossining, N.Y., Daniel Singer of Eldersburg, Md., and Ryan Wall of Groton, Mass.

To view the results, visit this link.