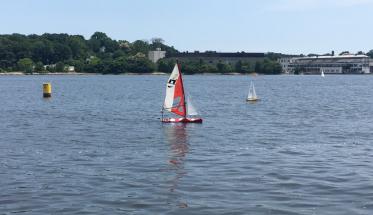 A team from WPI won last year’s competition in a hard-fought contest that featured unmanned sailboats navigating a variety of challenges on Chesapeake Bay in Annapolis, Md. Tradition calls for the winning team to host the competition the following year.

The competition challenges students to apply their robotics knowledge to develop autonomous boats up to four meters in length with the hope that their ideas and innovation could eventually be used in low-cost oceanographic research vessels designed for pollution control and surveillance.

“SailBot is a significant robotics challenge,” said Ken Stafford, director of the WPI Robotics Resource Center, who is serving as event chairman and advisor to WPI’s team. “You need to have the skillset of both a sailor and a roboticist to compete in this event.” William Michalson, professor of electrical and computer engineering at WPI, who has navigation and communications experience, is the team’s co-advisor.

SailBot ’18 features five water challenges and a design/presentation evaluation. The five challenges include a remote-controlled fleet race; a station-keeping event in which boats stay in the same place for five minutes; a precision navigation course; challenge competitions covering payload/load bearing, collision avoidance, and search; and a long-distance, seven-hour course. Other than the fleet race, all the challenges must be accomplished with the boats under full autonomous control.

Stafford anticipates the WPI team will participate in all but the payload event. This year marks WPI’s third appearance in the competition.

Boats may compete in the International SailBot class (boats up to two meters in length), and in an open class (for boats up to four meters). Generally constructed from composite fiber materials, the boats typically weigh between 15 and 100 pounds. WPI’s boat, a two-meter, fully autonomous fiberglass-hulled sailboat weighing approximately 50 pounds, features carbon fiber spars and a 10-foot-tall wing-sail. The team has tested it extensively on Lake Quinsigamond.

WHO: Eight teams from North America:

For more information and the full schedule, visit SailBot.

Media wishing to cover the event or do a preview story should contact media@wpi.edu.