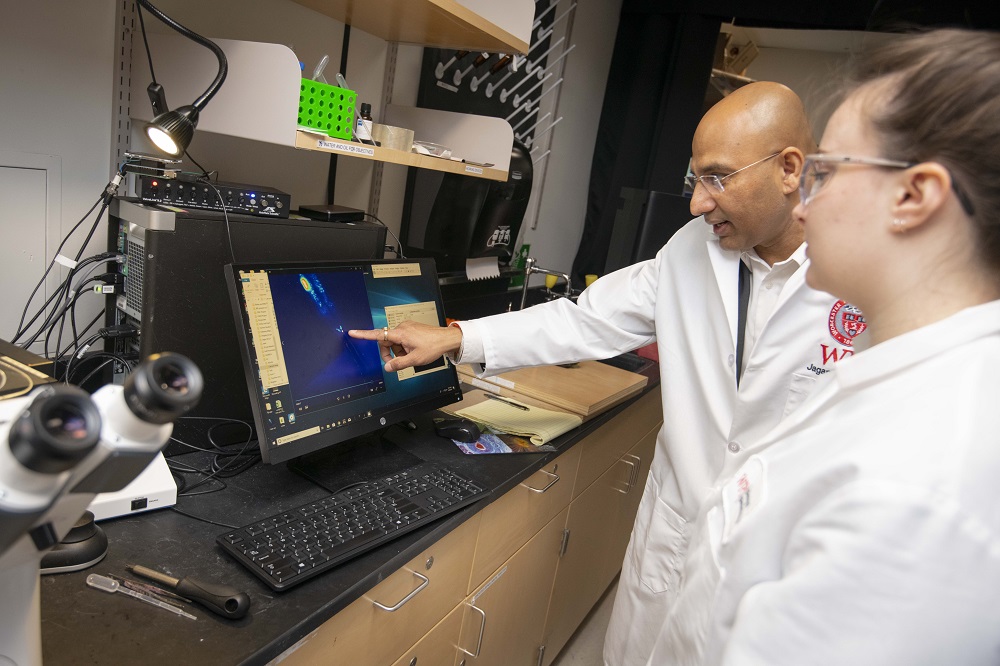 A biologist at Worcester Polytechnic Institute (WPI) has shown that a key biological component in a worm’s communication system can be repurposed to take on a different job, a critical finding about the workings of evolution that could one day affect research into drug interactions, agricultural bio-engineering, and a better understanding of genetic inheritance through multiple generations.

Jagan Srinivasan, associate professor of biology and biotechnology at WPI, and his research team published their findings in Nature Communications, a highly regarded, peer-reviewed scientific journal. The paper, "Co-option of neurotransmitter signaling for inter-organismal communication in C. elegans," focuses on the evolution of the chemical communication components involved in inter-organismal signaling, which is essential for animals to navigate and survive in their natural environment.

“Evolution is intelligent, complicated, and opportunistic,” said Srinivasan. “This was an old protein that the worm used for one thing and then, when a new need arose, used it for a novel function. It’s more energy efficient to take something it already has and use it for a new function instead of creating something wholly new. Scientists had hypothesized about this kind of biological repurposing, but no one had shown it. We believe we are the first to show this repurposed receptor in the signaling system.”

Neurotransmitters and neuroreceptors play a central role in biology, enabling cell-to-cell and animal-to-animal communication. For instance, in C. elegans, which are transparent nematodes widely used in biological and biomedical research, a neurotransmitter-sensing receptor, called TYRA-2, is needed for the worm’s avoidance response to osas#9, a specific pheromone created during times of starvation. If a worm is starving, it will secrete osas#9, signaling to other worms to avoid the area because there’s no food. Osas#9 and TYRA-2 work together for this avoidance response.

Funded in part by a $1.6 million National Institutes of Health grant  received in 2017, Srinivasan’s team has discovered that the nematodes repurpose the TYRA-2 receptor to bring about an aversive response, not between cells but among worms. This represents an inter-organismal communication pathway that evolved from inter-cellular neurotransmitter signaling via co-option of a neurotransmitter and its cognate receptor.

Other scientists had previously discovered that amino acid receptors can be re-purposed but Srinivasan’s team is the first to show the repurposing of a neurotransmitter receptor. He will be studying whether other types of receptors can be repurposed, as well.

“This is not the end of the story. This is the tip of the iceberg,” said Srinivasan. “This repurposing tells you how neurotransmitter signaling can evolve and how it affects the organism, whether it be humans, worms, or flies.”

His team’s discovery is now leading Srinivasan and his research lab to focus on three different, but related, areas that could be greatly affected by his re-purposing discovery.

The team is investigate how their finding about re-purposing could affect our understanding of drug interactions. A medication, for example, might have been created to target a specific disorder, like diabetes but by better understanding how someone’s body might utilize the same neuroreceptor to use that same medication for a different function, scientists may better be able to determine the potential utility of off-target effects in the treatment of infectious diseases.

The WPI researchers also will study parasitic nematodes that attack plants, causing disease and crop and financial loss in the agricultural industry. For example, a report in Western Farm Press, a news site that focuses on agricultural production in California and Arizona, noted that soybean cyst nematodes are considered to be the most serious pathogenic threat to soybeans, and are estimated to reduce returns to U.S. soybean producers by close to $1 billion annually. Srinivasan is researching whether plants can be engineered to produce osas#9 as an adversive agent, sending out avoidance signals to cause nematodes to leave the plants alone, so farmers wouldn’t need to use pesticide.

Srinivasan also is applying his findings to epigenetic research, the fairly new and quickly growing field of studying studying intergenerational (heritable) effects. Srinivasan, who has been working on research around how gene changes caused by environment and life changes are passed down through generations, now is studying how many generations of nematodes are affected by these changes.

“It looks like this receptor could cause epigenetic inheritance when you expose the mother to osas#9. Six generations of kids are sensitized to that,” said Srinivasan. “Why does that happen? This data on repurposing is a big piece of that puzzle. We’re putting pieces of the puzzle together.”

Srinivasan worked with Frank Schroeder, professor of chemistry and chemical biology at Cornell University, to discover the osas#9 neurotransmitter in 2013.

Caenorhabditis elegans (C. elegans), which are used in Srinivasan’s research, are transparent nematode worms that have a short lifespan, enabling scientists to conduct numerous observations and experiments in a relatively short period of time. Because the biological structures and processes being studied are common in all animals, work with C. elegans has implications for human health, aging and neurodegeneration.