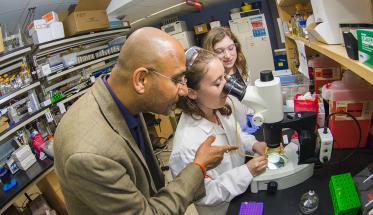 WPI Research: Your Grandmother’s Life Encoded in Your Genes

If a woman grows up during a famine, hungry more often than not and deprived of good nutrition, that experience will be encoded on her genes. And according to research just completed at WPI, that woman’s experience also could be encoded on her kids’ and even great grandkids’ genes, affecting their actions and health 100 years later.

An MQP (Major Qualifying Project) team of two Biology and Biotechnology students have taken on the old question of nature versus nurture, and their work has opened up a whole new area of research at WPI, including laying the basis for an MQP team next year to research the connection between neurodegenerative diseases, like Alzheimer’s, and epigenetics, or the study of inherited gene changes. 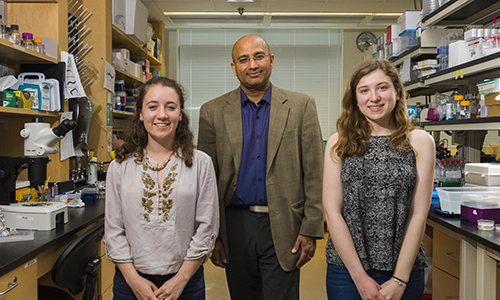 “People have always been in debate over nature versus nurture. We’re showing that nurture affects nature,” says Isabella Garver, who worked on the research team. “Your experiences do affect your behavior, as well as your DNA. Then it could get passed down and affect your grandkids’ or great-grandkids’ DNA.”

Garver’s hope is that further research will develop drugs that will be able to change people’s genes, and that will change their behavior, maybe making them less anxious, or even be able to “turn off” heightened risks for certain diseases, like Alzheimer’s, Parkinson’s, and cancer.

“That’s the goal,” says Garver. “There definitely have to be more studies on it, but I think there is hope to be able to turn a gene on or off, removing a cell memory and stopping a negative behavior or disease, rather than just treating the symptoms with medications. I think in my lifetime there will be different drugs created because of epigenetic studies and I wanted to be part of that.”

The field of epigenetics, which is fairly new and quickly growing, is showing that both environment and life experiences can directly interact with, and modify, genes, which are responsible for developing everything from internal organs to hair color, a preference for strawberries, and how sociable we are.

There’s a growing list of research providing evidence that experiences, like childhood abuse, can make genetic changes—turning a certain gene on or off, for example—that could cause anxiety, depression, or even suicidal tendencies. Being conceived or growing up during a time of famine could change genes, causing an increased risk for obesity or coronary disease.

Now there’s evidence that those genetic changes are passed down through generations, so our grandmother’s life and experiences helped make us who we are today.

And if the more than 20,000 human genes could be mapped and the cause and effect of certain combinations being “turned on or off” understood, then it could be possible to one day reverse a gene’s state and even cure cancer, stop heart disease, and slow aging.

“There definitely have to be more studies on it, but I think there is hope to be able to turn a gene on or off, removing a cell memory and stopping a negative behavior or disease, rather than just treating the symptoms with medications. I think in my lifetime there will be different drugs created because of epigenetic studies and I wanted to be part of that.” -Isabella Garver

That’s why they focused their MQP on studying the genetic memory of nematodes, which are microscopic worms that only communicate by emitting and interpreting chemicals called pheromones. The nematodes emit the chemical osas#9 when they find themselves in an area that doesn’t provide them food. The emission acts as a warning to other nematodes to avoid or leave the area.

Garver and McGlame, working under the supervision of Jagan Srinivasan, assistant professor of biology and biotechnology at WPI, wanted to test the hypothesis, whether the experience of the chemical by an individual causes any change in behavior in the future generations of the offspring.

“It’s interesting research that we never had the tools and technology to do before. Now we can plunge into an unknown area,” says Srinivasan, a geneticist. “This is very exciting. In epigenetic studies, our work is important and unique because no one has looked at this communication chemical before and no one has investigated up to three generations. Their hypothesis is that this genetic impression could be passed on for even more generations, seeing the same effect.”

He also notes that the students’ groundbreaking work has opened up a whole new area of research for WPI.

“They have started a new direction for the lab because other students will now pick up where they left off,” he says, noting that an MQP team next year will use Garver and McGlame’s work to search for a link between epigenetics and Alzheimer’s Disease. “That’s the beauty of developing a new direction. We keep building on our research.” 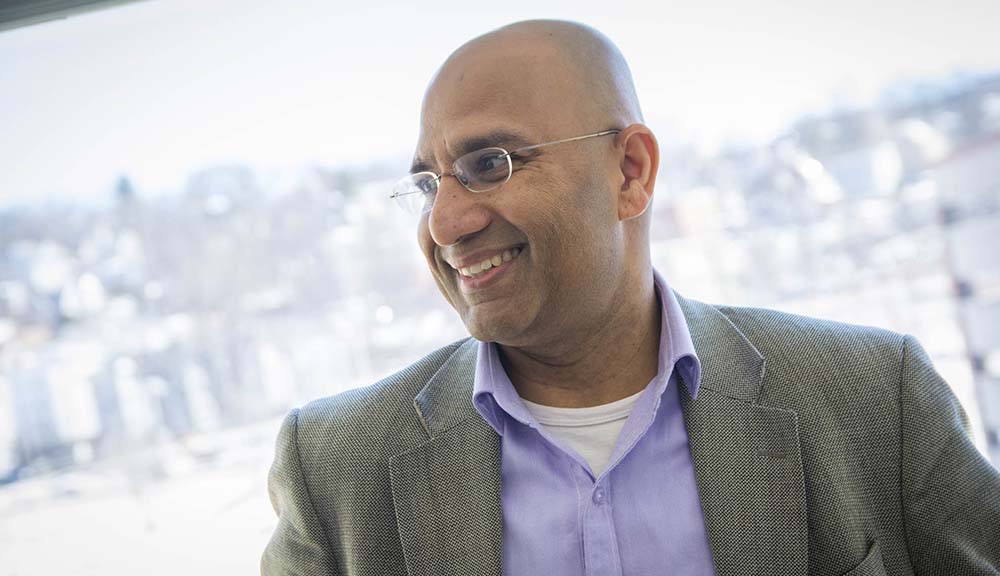 He explains that the epigenetic research initially got off the ground three years ago when a local high school student was working as a summer intern in his lab. Srinivasan believes that research helps develop future discoveries based on the foundation of knowledge that came before. The student came up with the idea for researching genetic changes in sea slugs caused by toxins in their environment. The sea slugs’ life span was too long for the student to get impressive results but that work got Srinivasan thinking about nematodes, which have a much shorter life span.

“What Izzy and Emily did was to set up a prototype to test something that would take ages in other organisms, especially humans, to research,” he adds. “If you were testing a woman and then her great grandchildren, think how long that would take. But with the worms, you can do this in two and a half weeks. This was an idea in my head and they’ve brought it to fruition.”

Srinivasan, who notes the students have become akin to his own family, says he saw Garver and McGlame grow as people and as researchers throughout the project.

“We’re not just scientists. We are teachers,” he adds. “We are giving science lessons and life lessons. They’ll be more successful in life when they are doing real applicable research. This experience was as enlightening and invigorating for them as it was for me.”

Garver's MQP took her knowledge beyond the classroom and better prepared her to dive into her first job.

“We learned that you might have one idea of what your project will be but there are so many ways your project can change and grow,” she says. “When I go to my first day on the job, they’ll give me a project and say, ’Figure out how to do this,’ and since I’ve already done critical thinking and seen how a project can change, it will be easier. I won’t need someone to tell me exactly what to do or how to do it.”

Garver has accepted a position as a research associate at Cell Signaling Technology, Inc. in Danvers, Mass., to work on creating antibodies that can be used in epigenetic research. McGlame has taken a job as a research technician at the Center for Genomic Medicine at Massachusetts General Hospital, where she will be using genetic strategies to research inherited brain disorders, such as Huntington's Disease.