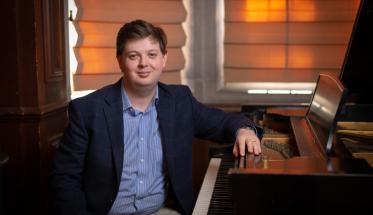 David Ibbett will debut his album Octave of Light through a live-streamed performance with the Boston Museum of Science on Nov. 12.

Earlier this year, David Ibbett, adjunct teaching professor of Humanities & Arts and Arts & Sciences, gave us a preview of his first album, Octave of Light, which narrates the stories of exoplanets—planets that orbit a star outside of our solar system—through composed music.

The Herd sat down with Ibbett to learn about how he recorded Octave of Light during the COVID-19 pandemic, and what the stars have aligned for his future projects.

HERD: Octave of Light is based on the question of whether or not life might be sustainable on other planets; what sparked your interest in looking at exoplanets?

DI: I've been working at the intersection of science and music for some years now, and have been fortunate to meet many inspiring scientists along the way. I was introduced to exoplanet science by Roy Gould of the Harvard-Smithsonian Center for Astrophysics, and we spent many hours discussing the field two summers ago. I was amazed by how far the field has come on in my own lifetime—that we have discovered over 4,000 distant exoplanets and can see their atmospheres!

HERD: What was it like recording Octave of Light during the COVID-19 pandemic? What challenges and/or surprises did you encounter?

DI: It was very challenging. The album is written to be played live, but as of yet the three musicians have never performed it all together. Instead, I set up an isolation recording studio in my house, and communicated with Beth Sterling (soprano) and Amelia Sie (violinist) one at a time via headphones. We made it work, thanks to technology— but I'm excited to one day perform all together!

HERD: What can the audience expect during your performance on Nov. 12?

DI: We'll perform the album in a special hybrid fashion using green screens, accompanied by stunning astrophysics animations from the Boston Museum of Science's Planetarium team. We are also joined by guest scientist Clara Sousa-Silva of MIT, who will give a special update on the search for life on Venus.

HERD: What do you hope listeners will take away from your performance?

DI: That we live in an incredible age of discovery—an exoplanet revolution! For the first time, we know that we are not alone, and that there are many fertile planets in our universe. With a little science background, we can all join in the hunt for new exoplanets and discover the clues for life on other worlds.

HERD: What future projects do you have planned?

DI: In January, Scott Barton, associate professor of Humanities & Arts, and I will collaborate with researchers from MIT and Duke University to perform in a concert called “Art of Polymers,” a celebration of the 100th anniversary of polymer science.

For later in 2021, I am working on an album of Neutrino Music with the Fermi National Accelerator Laboratory (Fermilab), a major particle physics and accelerator laboratory in Illinois that collaborates with researchers from more than 50 countries on physics experiments.