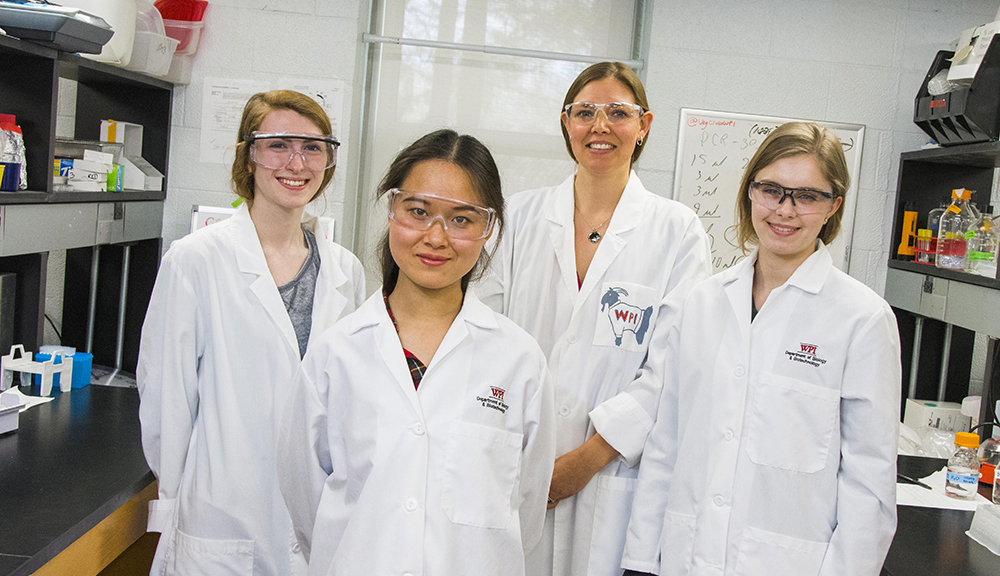 People are trying to be healthier, carrying bottles of water to class, to work, to the gym. The increasing worry, though, has been that a chemical in those handy plastic bottles could be causing a litany of health problems, ranging from elevated blood pressure to birth defects, neurological damage and even genetic change.

To avoid these issues, consumers started buying bottles without the problematic chemical bisphenol-A, better known as BPA. But are these BPA-free containers any healthier?

That’s a question Natalie Farny, assistant teaching professor in biology and biotechnology at WPI, has been working on with an MQP (Major Qualifying Project) team of top biology students.

“The fear is we don’t know what effect bisphenol has,” says Farny, who recently received the Trustees' Award for Outstanding Teaching. She has been studying cellular stress, or cells’ response to ward off environmental stressors, for 18 years. “We can see in a dish it has a lot of effects but we don’t know what it does to the human body—to our cells," she says. "There’s some evidence it can act as an endocrine disruptor, interfere with cellular communications, and cause genetic changes. We just don’t know the long-term health effects. That’s one of the things we’re looking at.”

BPA is an industrial chemical that has been used to make resins that coat the inside of metal cans—and certain plastics, like water bottles and food storage containers—for the past 50 years. The problem is that some research has shown that BPA can seep into food or beverages from their containers. A 2009 Harvard study showed that after drinking from water bottles made with BPA for just one week, participants’ BPA concentration in their urine increased by 69 percent.

BPA alternatives, like related bisphenols BPF and BPS, have been billed as being safer substitutes. However, while research into BPS and BPF is still in the early stages, a small but growing list of studies has begun to sound an alarm about those so-called safer BPA-free alternatives.

The concern is they all might carry very similar health risks.

Farny and her MQP team are tackling this BPS and BPF research, which could affect millions of people, from a unique angle: What are the chemicals’ effect at the cellular level?

The MQP team, made up of senior biology and biotechnology majors Chandler Friend, Megan Hoppe, and Jingyi Wu, took second place honors in the 2018 MQP Project Presentation Day. And Hoppe recently was awarded a Salisbury Prize—given to the most meritorious members of the WPI graduating class. The team has been using fluorescence microscopy (optical microscopes that use fluorescence and phosphorescence) and Western blots (a laboratory method used to identify specific amino-acid sequences in proteins) to examine cellular stress responses in several human cell lines that have been treated with bisphenols.

Cellular stress response is a wide range of molecular changes that cells undergo in response to environmental stressors, including extremes of temperature, exposure to toxins, and mechanical damage. Stress causes the formation of stress granules or clusters of proteins that wrap around and protect the RNAs and the information coded in their sequences.

This is the cell’s method of protecting itself. The stress granules either do their work until the stress passes or until the cell learns how to manage the stress. However, if the stress goes on too long and the cell can’t adapt, the cell will die.

“...We don’t know what effect bisphenol has. We can see in a dish it has a lot of effects but we don’t know what it does to the human body—to our cells. There’s some evidence it can act as an endocrine disruptor, interfere with cellular communications, and cause genetic changes. We just don’t know the long-term health effects. That’s one of the things we’re looking at.” -Natalie Farny

Wu explains that their research found that BPA and BPF both cause a stress response in human cells. BPA, the traditional chemical used in water bottles and food containers, does tend to elicit a greater response than BPF but the cell stress is still present. While BPS did not seem to cause a stress response, the group predicts BPS may make cells more sensitive to cell death in response to other types of stressors.

The team also pinpointed the specific pathway that is used to create the stress granules. The pathways (molecular chains that relay signals inside the cell) have different biochemical meanings and show exactly what is being stressed in the cell. The MQP team found that the bisphenols cause a misfolding and misprocessing of the proteins.

“It gives us additional clues as to what the bisphenols are doing to the cell,” says Farny. “Our research shows that bisphenols are activating cellular stress and if that stress is not relieved, it can lead to cell death. We see that for several hours the cells can react and adapt to the stress response but at a certain time, there’s a point of no return.”

Friend notes they believe that for adult humans it would take a high dose of bisphenols for that to happen. However, during embryonic development, a higher concentration of these chemicals build up in the fetal tissue, especially during the first two trimesters.

“The rates that are detected in fetal tissue can be 10 times the rates in adults,” she says. “That’s why you see the concern for birth defects because the concentration differences are so extreme.”

Farny’s work on bisphenols’ effects on cellular stress will continue with future MQP teams looking at how doses of the chemicals over longer periods of time affect the cells, along with getting a better understanding of the cellular effects from the kinds of doses many adults are dealing with.

The MQP team that will continue this work next year has already been set up.

Hoppe, who has a job lined up at Massachusetts General Hospital as a research technician studying chordoma, a rare type of bone cancer, says the MQP offered her a very different training experience than she received in a traditional classroom setting because she was able to work through all the research steps from setting up the project to gathering and analyzing the data.

The WPI research into bisphenols and cellular stress is being done in collaboration with doctors Marta Fay and Nancy Kedersha at Brigham and Women’s Hospital in Boston, who provided the cell lines the students used in their research.