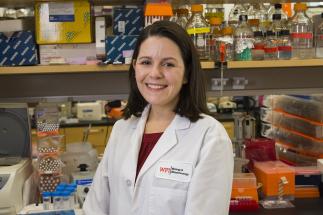 Worcester Polytechnic Institute (WPI) researcher Amity Manning has been awarded a $799,995 grant from the American Cancer Society to determine the role a critical tumor-suppressor protein plays in chromosome errors that arise during cell division in cancer cells.

The four-year project will lead to a better understanding of how an absence of retinoblastoma protein (pRB), which regulates cellular processes, contributes to mis-sorted genetic information in tumor cells.

“We want to understand the fundamental mechanisms that have gone wrong in cancer cells that have lost pRB,” said Manning, assistant professor in the Department of Biology and Biotechnology and principal investigator of the project. “Our hope is that what we learn will provide information on biological pathways that can be moderated, perhaps through drug therapies.”

Normal cell division occurs when a parent cell divides into two new cells, each with an identical copy of genes from the parent cell. These genes sit on structures called chromosomes.

Cell division goes awry, however, in cancer and can result in new cells that contain the wrong number of chromosomes. When these errors happen over and over each time the cancer cells grow and divide, it results in genetic variability that can allow tumor cells to evade drug treatment.

Manning will define how a segment of chromosome known as the centromere normally builds connections for cell division and how that process changes in the absence of pRB.

“Without  pRB, subtle defects may arise in the centromere that allow some chromosomes to sort improperly, so we will define which proteins are involved in the erroneous sorting and determine whether other regulators could correct the errors,” Manning said.

Manning will collaborate with researchers at the University of Massachusetts Medical School who have expertise in genomics, bioinformatics analyses, and DNA analysis methods. She also will have access to the medical school’s electron microscopy facility for imaging studies of chromosomal structures.

Manning focuses her research on the underlying mechanisms of genome stability and the results of instability. Her work is supported by the Smith Family Awards Program for Excellence in Biomedical Research, and she is co-principal investigator on a research project funded by the National Institutes of Health to develop computational models of the forces that influence a critical piece of cellular machinery involved in cell division.