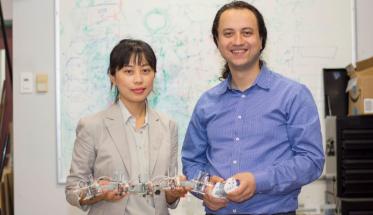 With a $400,000 award from the National Science Foundation, the team will create robots that can move through rubble, confined spaces, and rough terrain to help rescuers find trapped and injured victims.

A team of researchers at Worcester Polytechnic Institute (WPI) has received a three-year, $400,000 award from the National Science Foundation to create autonomous snake-like robots that can navigate more naturally and easily through the rubble, confined spaces, and rough terrain left in the aftermath of a disaster and send images and information to search-and-rescue teams.

“The goal of this project is to have a snake-like robot with the autonomy to navigate through its environment without close supervision,” said Jie Fu, assistant professor of electrical and computer engineering and the co-principal investigator on the project. “In search-and-rescue scenarios, you’d want a robot you can rely on to go into areas inaccessible by humans and provide critical information about conditions there and about who needs to be rescued first.”

Cagdas Onal, assistant professor of mechanical engineering and Fu’s co-principal investigator on the project, said there are three prongs to the research: mobility, low-level motion-control algorithms based on embedded sensory feedback, and high-level planning algorithms.

WPI scientists are pushing ahead in all three areas to create “soft” robots, constructed from silicone rubber, that are made up of connected modules, each with its own tubing, valves, pneumatic actuators, integrated sensing, and control units. Each module, or segment, of this soft robotic body is able to generate its own motion. The snake robot’s locomotion “gaits” are the combination of these local module motions.

Onal, who has been focused on soft robotics for the past seven years, noted that an important aspect of the new project is advancing how snake-like machines move. Currently, his snake-like robots are able to crawl in a serpentine fashion, or even with a side-winding motion. But he would like his robots to be able to raise their heads to get a better view or to capture better images, and to even be able to climb stairs or move up and over obstacles.

He is also designing soft robots to use the objects around them, much like biological snakes would, to propel themselves. “A snake, for instance, could move by wrapping part of its body around a rock so it can push against it and propel itself better,” said Onal. “If it’s in a pipe or a maze-like structure, it might push off the walls to be able to move around an obstacle. It’s very bioinspired. We couldn't reproduce that kind of movement safely before because we didn’t have the materials and the actuators. Now we do.” 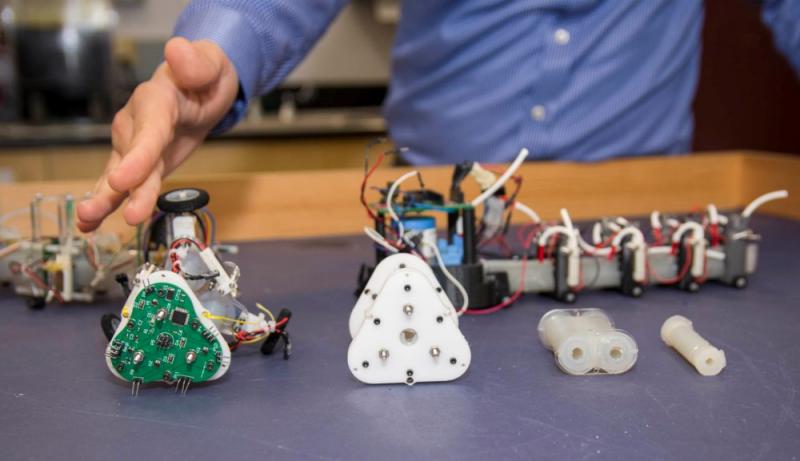 From right, a soft, compressible actuator; two actuators together, which allows a snake-like robot to move side to
side; a module with three actuators, which permits a robot to also lift its head; a complete module with electronics.

Soft robots represent a significant advancement over traditional hard, rigid robots, which might break or cause damage if they tried to push off a wall or object. Soft robots can use their components differently. Because their bodies don’t have discrete joints, they can bend continuously, making it much easier to gently negotiate tight corners.

The low-level algorithms, which Onal is working on, are focused on controlling the robot’s motion; they may be the key to creating these new kinds of movements. Instead of only propelling the robot, for instance, the new algorithms are aimed at enabling the robot to better use friction to rise up from the surface.

The high-level algorithms Fu is creating are focused on decision making and autonomy. They will choose which gait or low-level control the robot will use under specific conditions. They also will decide the best mode of motion based on the environment in which the robot finds itself.

The robot only needs to know where it’s trying to go and it will figure out how to get itself there. The robot will make its own decisions and execute them.

Fu noted that the research project is unique because of the WPI team’s work on the high-level, learning-based control design.

“If I put the robot in the sand and then on gravel, it would exhibit different behaviors,” explained Fu. “On the higher level we can introduce learning-based mechanisms so the robot will learn the best way to move based on the environment it’s in and based on what it needs to achieve in that environment.”

The robot also should be able to learn which body movements—wrapping around or pressing against obstacles to propel itself, for example—work best in particular situations, according to Onal.

So far, the WPI scientists have created a prototype of their soft, snake-like robot and equipped it with custom-built deformation sensors. The sensors enable the robot to know what shape its body is in with high accuracy and speed (for instance, wrapped around rubble, lying straight, or poised with its head in the air). Once it is aware of its own body configuration, the robot can better control its motion. Onal said this is the first soft robot that uses integrated deformation sensors to perform not only feedback control of its motion but also plan this motion in a scalable and efficient manner to perform tasks autonomously.