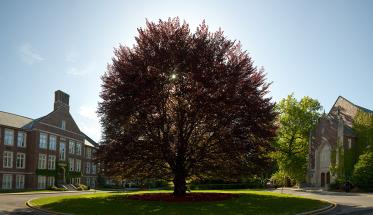 With an audible gasp and animated chatter following the announcement that class gifts this year would top more than $21 million—including a single gift of $12 million from an anonymous alumnus—the Alumni Weekend luncheon and awards ceremony was abuzz with excitement about the opportunities such funding would afford WPI. But everyone agreed the unrestricted pledge is a remarkably generous statement of confidence in the university.

The Alumni Association honored some of WPI’s ambassadors and supporters, as well as those with outstanding professional achievement, during the annual event. 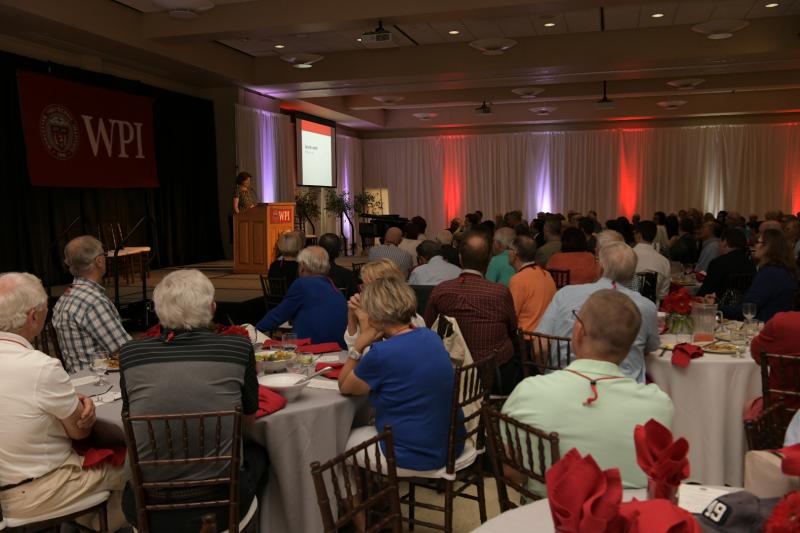 The $12 million pledge, one of the largest single gifts in WPI’s history, will support the university’s endowment and is unrestricted, allowing WPI to direct the funds to its highest priorities and areas of impact.

“We are honored and deeply grateful to this donor for such generosity,” President Laurie Leshin said, prior to the event.

Monica Ellis, director of academic advancement who is tasked with fundraising, termed the donation “phenomenal.”

“It is wonderful for WPI to receive unrestricted gifts,” she said. “It's great to see the confidence that shows in the institution. Twelve million dollars is fantastic, especially right now, when WPI is instituting new initiatives that are part of the Strategic Plan. WPI can use it to make new ideas possible.”

Robert Woog ’68, international telecommunications consultant from South Orange Village, N.J., who received a Robert H. Goddard Alumni Award at the ceremony, said the gift is "fantastic—especially the flexibility WPI has to use it in the best possible way. WPI always amazes me when I come back here ... how beautiful the physical plant is and how they’ve integrated new buildings into the campus without disrupting the charm and architecture.”

While on campus, Woog––who was recently featured in the WPI Journal––interacted with students and said he was impressed. “I am just amazed at how sophisticated and creative they are and how well prepared they will be to enter the global workforce,” he said.

“The new initiative the president started is, I think, a positive point for this fine institution and the endowment will fuel that in order for it to come to fruition,” said Cunic, who was also impressed with improvements on campus.

A Worcester native, Cunic said he visits the WPI campus while in the area visiting family.

“It is tremendously different,” Cunic said. “The newest building when I was last on campus was Goddard Hall. It is wonderful how the campus has grown, but you still get the feeling of family and community. It is large enough that you bump into different people, but small enough that you literally see everyone you wanted to see.”

Allison (Huse) Nunn, a retired nurse from Brooklyn, Conn., and Kathy (Coyle) Nichols, a retired engineer from Grafton, were the first women to live on campus; both graduated in 1973.

“I think the $12 million gift is amazing and awesome and extremely generous,” Nunn said, whose daughter and son also graduated from WPI.

“Earlier, Laurie [Leshin] was talking about all the wonderful things people from WPI do,” Nichols said. “Everything we’ve done as engineers goes to making people’s lives better. We can’t stop ourselves from solving people’s problems. That is what they taught us here. Once you turn that on in somebody, it never turns off.

“WPI with its IQP (Interactive Qualifying Project) program ... it's almost like we are the Peace Corps that goes out into the world and does projects, and I would like to see that featured more. We are not just making money as engineers. We are doing good for the world.”

“Everything we’ve done as engineers goes to making people’s lives better. We can’t stop ourselves from solving people’s problems. That is what they taught us here. Once you turn that on in somebody, it never turns off.” -Kathy (Coyle) Nichols ’73

Nichols said she would like to see some of the money go toward creating more partnerships between WPI and communities locally and around the world to continue to grow the IQP and MQP (Major Qualifying Project) programs.

“I would also like to see more young girls encouraged to go into STEM fields at a younger age and inspire them,” she added.

Many of the alumni receiving awards who spoke at the ceremony echoed Nichols’s feelings of the importance of the IQP program and how WPI taught them to give back by going out and solving world problems. Nurturing such compassion stuck with them, alumni said, including Arly Dungca ‘08, who received a John Boynton Young Alumni Award for Service to WPI.

Dungca said that as a teenager growing up in Leicester he wanted to attend college in Boston, but his mother suggested he apply to WPI. After attending an IQP session at a WPI open house, Dungca said he was hooked, but, being a stubborn teen, he would not let onto his mother that day that she was right.

“I didn’t have the confidence or humility to tell her, ‘Mother knows best,’” he said. “My experience at WPI was more than just academics and the great engineering courses I took. I learned a lot that I apply to every day now … it continues to be transformational. I believe in WPI’s mission to empower others to solve the world’s problems so we can make it better for everyone else.”

Nina Simon ‘03, who received an Ichabod Washburn Young Alumni Award for Professional Achievement, is the executive director of the Santa Cruz Museum of Art & History and an author whose work has been shared in the Wall Street Journal, the New York Times, on NPR, and TEDx. She is also author of the popular Museum 2.0 blog.

As an exhibit designer described as a “museum visionary,” Simon shared her vision for inclusive museums and cultural institutions as personal, dynamic, and collaborative places for visitor engagement.

When she started at WPI, Simon said all her classmates were men.  “I never felt discriminated against,” she said. “I felt supported,” though only 1 percent of students taking electrical and engineering courses at the time were women. I learned to love being different, but I never stopped noticing and I kind of felt like I was crashing somebody else’s party.”

In her work, Simon said she sees the challenges as the same. Though she strives for museums and cultural institutions to be places for everyone, she notices, “not everyone is coming in.”

If museums are to be “of, by and for the community,” she said, everyone has to feel more than welcome—such spaces have to invite them in to help create the space so it can be “of and by them,” as well.

President Leshin closed with her sincere thanks for alumni and donor support of the university and its students, remarking on the diversity of career paths of the alumni award winners, saying, “Things change over the course of a career, and it is truly gratifying to see this demonstration that a WPI education is portable across so many opportunities.”

William R. Grogan Award for Support of the Mission of WPI