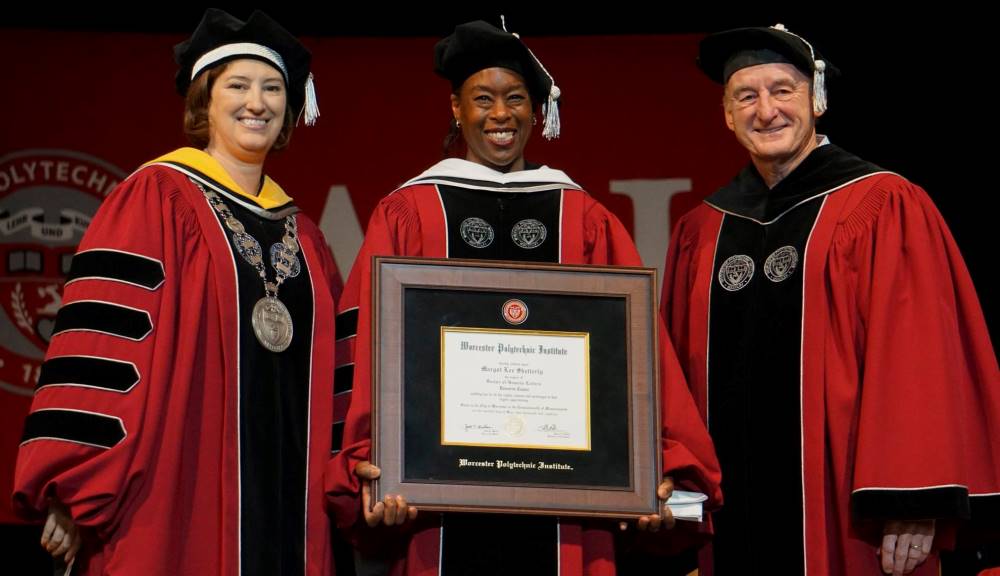 WPI awards more than 980 bachelor’s degrees to the Class of 2018 and honors Philip Ryan ’65, former board chairman who served as interim president

Today, as part of its 150th Commencement exercises, Worcester Polytechnic Institute honored the 981 members of the undergraduate Class of 2018 in a ceremony held on the campus quadrangle under a white tent that shielded guests from the light rain.

Nearly 830 master’s and doctoral degrees were bestowed in a separate ceremony on Thursday evening.

President Laurie Leshin and Board of Trustees Chairman Jack Mollen presided over today's celebration, at which the keynote address was given by Margot Lee Shetterly, author of Hidden Figures: The American Dream and the Untold Story of the Black Women Mathematicians Who Helped Win the Space Race. The book, which was made into a major motion picture in 2016, shares the history of the black female mathematicians who were part of NASA’s workforce from the 1940s to the 1960s. Shetterly, who is also the founder of The Human Computer Project, received an honorary doctor of humane letters degree.

In her remarks, Shetterly told the graduates that the problems they will be asked to solve “will demand your skills as a professional, but they’ll also require you to draw on your deepest well of humanity,” saying that science and the humanities are “both rooted in the same motivation, which is to measure and understand the nature of the world, and to make the human world a better place.”

Shetterly spoke of Albert Einstein, whose “depth of concern for the human condition matched his scientific brilliance,” and recalled his words: “Knowledge of what is does not open the door directly to what should be.” She told the Class of 2018, “It’s now your turn to decide what the world ‘should be.’ And even quiet or unseen decisions that you make about what should be have the potential to echo through the years of history.”

By way of example, Shetterly talked about Henry J.E. Reid, WPI Class of 1919, who was director of the Langley Memorial Aeronautical Laboratory, where Hidden Figures is set, from 1926 to 1961. The lab was then part of the National Advisory Committee for Aeronautics (NACA), precursor to the National Aeronautics and Space Administration (NASA). Shetterly noted that the lab was also where Richard Whitcomb, WPI Class of 1943, conducted his groundbreaking research that made supersonic flight practical.

Reid oversaw the laboratory at a time when aeronautical research mathematicians—or human “computers,” as they were called—were critical to the mission’s success. It was also a time of desegregation and racial tension, when blacks were still commonly denied equal rights and access to jobs. While not a civil rights activist, Shetterly said, Reid was a practical man focused on the goals of his laboratory and mission.

“His job was to manage aeronautical engineers; he didn’t sign up for social engineering. The first impact of his decision to hire these hidden figures [black women computers] at the laboratory was to supplement the brainpower America needed to win World War II, and best the Russians in the space race.”

Reid’s hiring of the most talented computers, regardless of their skin color, was “a practical solution, and the importance of practical solutions was literally written into the organization’s founding charter,” Shetterly said. “But I like to think that Reid also knew this was the right thing, the fair thing, a decision that nudged the world that was toward what it should be, where equality is not just a mathematical concept, but the ethical equality of the Declaration of Independence, as in, we hold these truths to be self-evident that all men—and women—are created equal.” 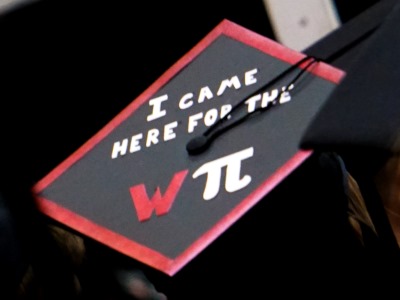 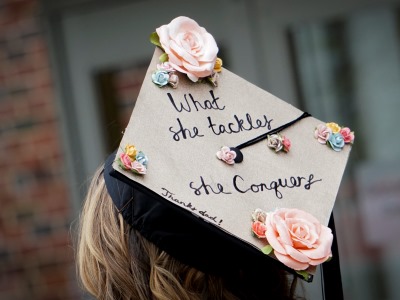 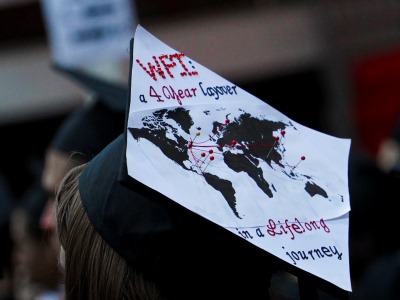 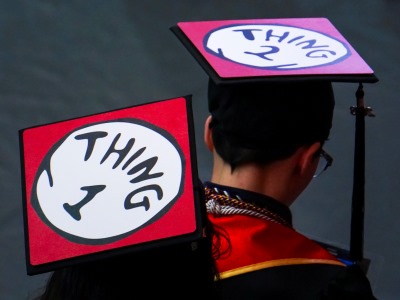 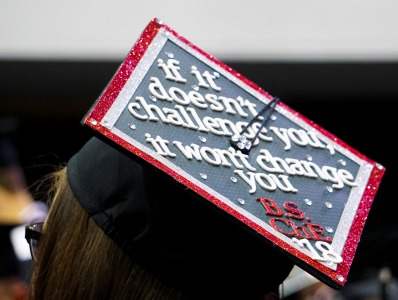 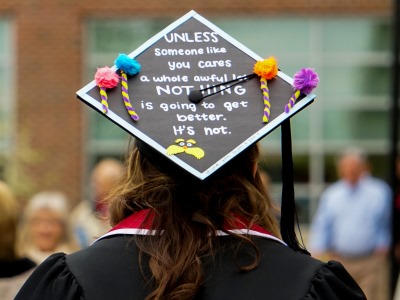 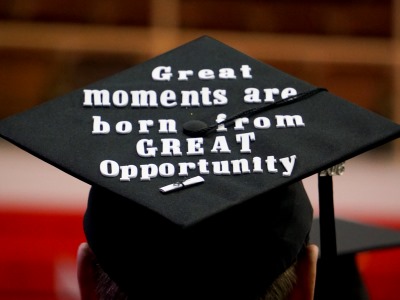 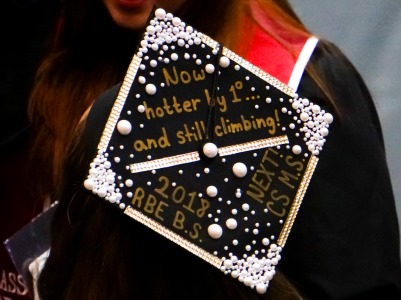 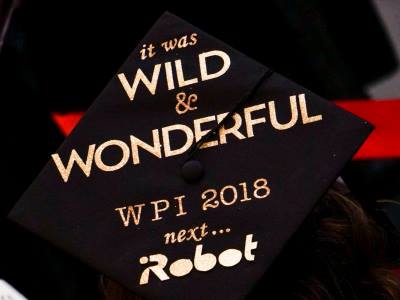 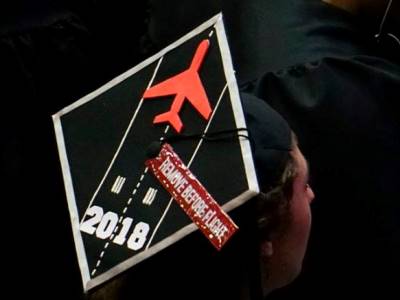 In her remarks, President Leshin , reminded members of the Class of 2018 that she herself had arrived on campus when they did, having begun her presidency just a few weeks before their move-in day in 2014.

“Your first week on campus, you offered me the privilege of joining you in one of WPI’s most hallowed traditions, crossing Earle Bridge. Since then, you and I have experienced WPI together. I watched you win your first rope pull competition… and you cheered me on while a robot poured freezing cold water on me for the ALS Ice Bucket Challenge. We all learned WPI’s special language of acronyms.

“But most importantly, we discovered together the life-altering privilege of being part of a university that challenges us to do our best every single day,” she said.

“Fast forward to today. This morning, I had the honor of watching you again cross Earle Bridge, this time without me.” WPI tradition holds that the incoming class crosses Earle Bridge to begin their studies here, while the graduating class crosses the bridge—in the opposite direction—signaling the conclusion of their time as WPI students.

“I confess to feeling a lump in my throat at the thought of bidding you, MY CLASS, goodbye for now. But more than sadness to see you go, I feel a great sense of pride in all you have accomplished here at WPI, and a deep certainty that you are ready to take on the new challenges that await you beyond this campus. I know this, and your professors and your parents know it too—because over the past four years, we have all watched, and hopefully helped you discover your passions. We’ve seen you work very hard, we’ve seen you truly make a difference, and hopefully we’ve set you on a path to make your dreams a reality.”

President Leshin described three students who have made their dreams a reality at WPI: Kelly Carlson, of Arizona, who, as a child, marveled at the attractions at Disneyland and thought, “Wow, somebody made this!” Carlson wrote to Disney, Leshin said, and asked how she could “become that someone, and Disney wrote back: ‘Study mechanical engineering.’” So she did. Carlson, who received a full scholarship to WPI (the Paul Allaire/ FIRST Robotics Future Engineering Leadership Scholarship), earned her degree and landed her dream job as a show mechanical and animation engineer for Walt Disney Imagineering.

Leshin also talked about Ama Biney, who grew up in Worcester, “right next door to WPI. At 18, Ama was already known throughout our home city as a superstar athlete, and she came to WPI to find out how else she could make an impact.” Biney earned her degree in management engineering, while also competing on the varsity basketball and softball teams, earning numerous league and national awards for both academic and athletic performance, including being named this year’s NEWMAC Athlete of the Year in both basketball and softball.

“I attended many of Ama’s games and always feel great pride in the way that she, and all of our student-athletes, represent WPI,” said Leshin. Biney has taken a position at United Technologies, in Palm Beach, Florida, where she will participate in the company’s premier Operations Leadership Program.

Lastly, Leshin called out David D’Antonio, whose story “shows a special amount of perseverance.” In 1980, D’Antonio dropped out of WPI when could no longer afford to attend. He had been a computer science major and over his career worked as a software engineer for companies such as then Digital Equipment Corp., Car Gurus and ZipCar.

Despite his successes, “not having his degree always gnawed at him,” Leshin said, and in 2016 returned to complete his final courses and coursework. “And today, nearly 40 years after he left WPI, David D’Antonio, now age 61, will walk across the stage at to receive his degree in Computer Science!”

As she does each year, Leshin concluded by telling the graduates, “With your talent and your WPI education, we know that you will do well in your career, and do well for your families. My charge to you, Graduate Class of 2018, is that you also be sure to do good. For your community, for your nation, for the planet, and for all those who will follow in your footsteps.”

Ryan earned his bachelor’s degree in civil engineering at WPI and an MBA from Harvard Business School and became a highly successful management consultant with a long career of helping corporations and individuals achieve their best performance. Throughout his life, he remained close to WPI and set a high standard as an alumni volunteer, serving on countless committees, and was ultimately elected to WPI’s board in 1999. In 2013, he was asked to serve as interim president as the university moved forward with a major fundraising campaign, celebrated its 150th anniversary, and chose its 16th president, Laurie Leshin. He was board chair for President Leshin’s first two years and continues to serve as an emeritus trustee.

In his remarks, Ryan congratulated the Class of 2018 and urged them to stay connected to each other and the university and to “help elevate WPI’s impact on the lives of future students, on STEM education, on society, on communities, and on lives around the world.”

Ryan recalled, “In 1965, the spring of my senior year, I sat in Alden Memorial, enthralled, listening to Mildred McClary Tymeson discuss her newly released book, Two Towers, the story of the first 100 years of WPI,” he said. “She concluded her remarks with these final lines from her book:

“Today the Institute stands solidly atop its rounded hill, still overlooking the City and reaching towards the Sky. It stands there for more than any other reason because—by some strange and wonderful supply—there have always been enough people who cared.”

The undergraduate class speaker was Riley McManus, from Newington, Conn., who received a bachelor of science degree in civil engineering. McManus talked about the “nine words that WPI instilled in us during the first day of orientation: Go to class. Do the work. Ask for help. We didn’t know it then, but we soon came to learn that those words were a valuable key to our success.”

While those words provide helpful advice regarding academics, McManus noted, WPI also encourages students to get out of their comfort zones and interact with others—through team projects, global travel, and simply talking with, and listening to, new people. “When we sincerely open our minds and search for views that oppose our own in order to gain a deeper understanding of our ever-changing surroundings,” he observed, “the worst-case scenario is that someone learns something.”

Thus, he concluded, “I would like to propose nine new words meant specifically for graduates: Converse with others. Challenge your views. Advance your world.”

Since 2016, WPI has held two distinct exercises in the spring to celebrate the accomplishments of its undergraduate and graduate students, owing in part to the growth of its programs, particularly its graduate programs. This year WPI awarded a total of 764 master’s degrees and 65 PhDs, including its first PhD from the Foisie Business School, Thursday evening in a Graduate Commencement ceremony at which Marcia McNutt, president of the National Academy of Science, gave the keynote. McNutt and Glenn Yee, ’74, trustee emeritus and founder of Pacific Can Company, received honorary degrees.

On Friday, 25 cadets of the Army, Navy, and Air Force ROTC were commissioned as officers in the U.S. military during the Worcester Consortium of Colleges Reserve Officers’ Training (ROTC) Corps Joint Service Commissioning Ceremony. Robert Catalanotti, Senior Advisor to the Assistant Secretary of Defense for International Security Affairs and recently retired Major General, presided as commissioning officer, administering the oath of office and delivering the keynote remarks.