“Around the World in 40 Years” 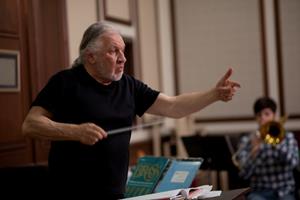 The Master Singers of Worcester will perform with the WPI Orchestra and the Medwin Honors String Quartet in a concert billed as “Around the World in 40 Years” at Worcester’s historic Mechanics Hall at 7 p.m. on Saturday, April 1.

This concert has been almost a year in the planning. According to Douglas Weeks, WPI coordinator of music, the performance is also slated as a retirement party for Malcolm Halliday, artistic director of the Master Singers. In addition to conducting the concert, Halliday will perform pieces on the piano with the String Quartet. The world premiere of his own musical composition, An Ode to the Portrait of Clara Barton (which itself hangs in Mechanics Hall) will be featured.

Local composer Steve Barnacle’s setting of Edgar Allen Poe’s The Bells, will have its world premiere during the concert. The evening's major work is Ruth Watson Hendersen’s composition Voices of Earth. Rimski-Korsakov’s Russian Easter Overture will be among the pieces performed jointly between groups, and Beethoven’s Choral Fantasia—featuring all the musical groups—will be the finale.

Weeks is looking forward to the event, and says this concert “is a gift, and a wonderful opportunity for the students to perform at one of the world’s great concert halls.”

The concert is open to the public. Tickets are available for $35, or $30 for students and seniors.