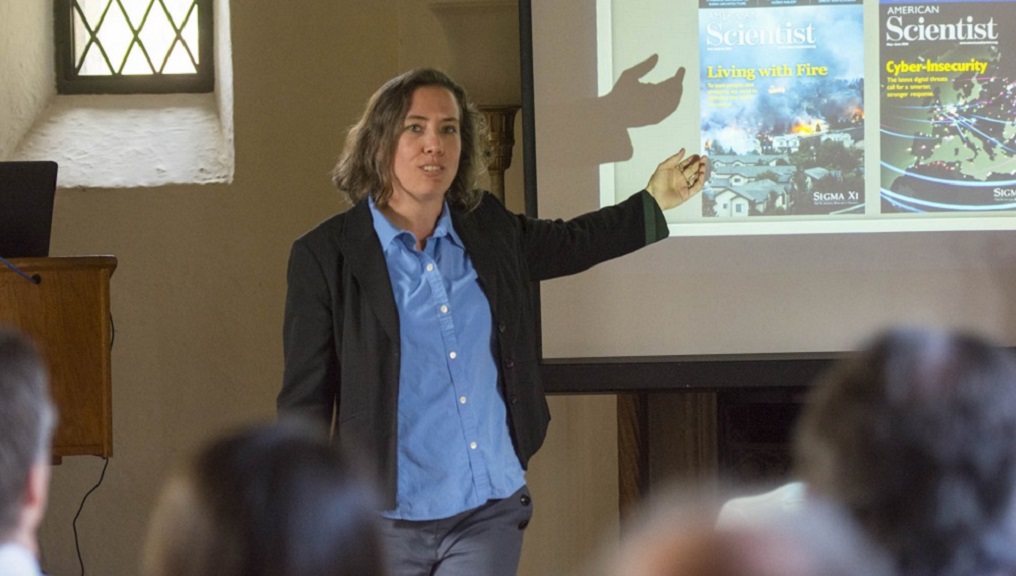 The Art of Science Communication

She especially likes to help scientists find their storytelling voice, a task that can be difficult amid reluctant researchers who either downplay their findings or are unsure how to craft a story.

“What I really enjoy is helping scientists tell their stories, and not all of them are aware that they need to do that or want to do that,” she said. “So I like to convince them they have a good story to tell.”

On Thursday, Saunders delivered a 30-minute lecture, “Bringing Together Science and Communication,” at Higgins House as the kickoff to the Humanities and Arts Project Presentation Day celebration. Brenton Faber, professor of writing, organized the event, which was attended by 50 faculty members, students, and administrators.

Saunders described the storytelling process, and cited the value of content written by scientists about their own peer-reviewed research. She offered several tips for researcher-writers, such as the importance of finding that Aha! research moment, the benefits of  adding multiple entry points such as sidebars and pull quotes, and the value of developing a strong lead paragraph.

American Scientist, an illustrated bi-monthly publication about science, engineering, and technology, has been published by Sigma Xi, the scientific research honor society, since 1913. Saunders noted that the magazine has “a slightly different editorial model” than many other publications in that scientists write all of its features and most of its content. “We are not written by journalists,” she said.

As a result, Saunders said, magazine editors invite scientists to write for them, and editors work closely with scientists to develop their manuscripts. She also said editors strive to have a diverse authorship in the magazine. “We invite scientists from all over the world," she said, "and we have a really strong focus on minority scientists.”

Saunders discussed some techniques for turning science research into a captivating narrative. “We tell our authors that what they’re really trying to do is draw the reader in and bring them along with you,” she said. “It’s almost like unfolding a mystery novel. You don’t have to start at the beginning and go to the end. You can start with an anecdote and go from there.”

She also noted that scientists often fall into traps, including making assumptions about how much their readers actually know. “[Scientists] are very ensconced in their own fields, so we have to be the ones to watchdog them and say, ‘I know you think that term is common, but it’s not,’” she said to knowing laughter.

Saunders said she works with writers to keep a more conversational tone in their writing as opposed to a rigid set of linear parameters.

At one point, Saunders displayed on a screen a raw manuscript about fire in microgravity. She said the authors had a compelling example of a fire on the Soviet Mir space station, but the anecdote was buried in the middle of the manuscript. “They spent the first section of their paper describing different types of fire and my response to that was, ‘This is supposed to be about fire in space. We should probably get to space first.’”

“I thought her presentation was extremely helpful and insightful in terms of getting a deeper vision and broader overview of science communication,” said WPI physics professor Germano Iannacchione.

Iannacchione, who also serves as secretary of the WPI chapter of Sigma Xi, noted that Saunders’s goals mirror those of WPI in terms of communicating science.

“She’s doing a lot of the same things on a grander scale that we’re trying to do in our chapter,” Iannacchione said. “It’s an inspiration to see what she’s doing.”