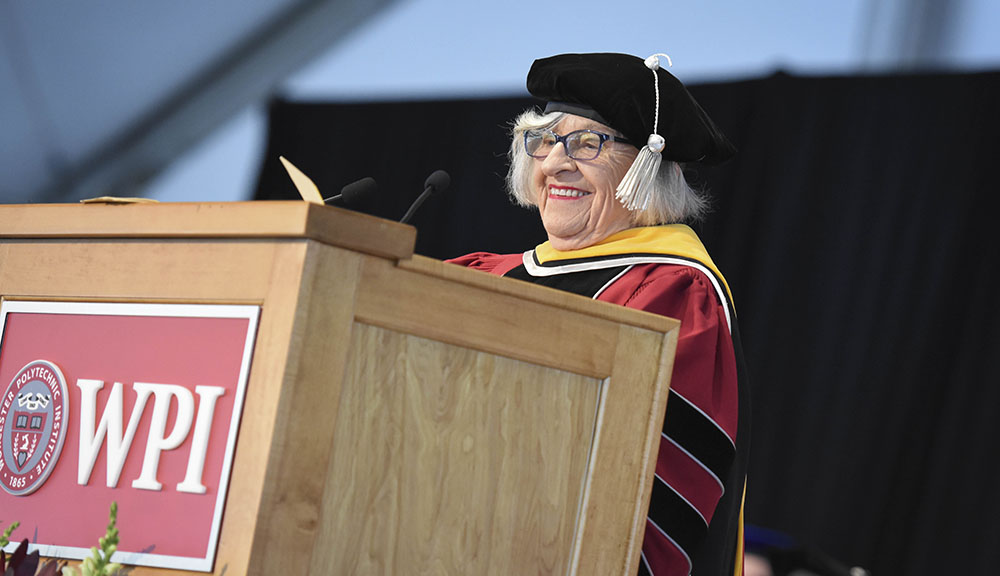 On May 11, Audrey Carlan ’57, who earned a master’s degree in physics as WPI’s first female graduate student, proudly received her honorary doctorate after being greeted by a standing ovation from her fellow graduates. Sixty years after Carlan and her late husband, Alan, were part of WPI’s first physics MS class, she returned to “Worcester Tech.” The Carlans went on to have two sons and a daughter (first son Steve was born just weeks after that 1957 commencement) and established careers as mathematicians and physicists with equipment increasingly more sophisticated than the IBM 650s they started with at American Optical Company and computer languages much advanced from the FORTRAN in use in their early years. Carlan told graduates of her journey, her life-long passion for science, and her pure delight at what the future holds for them.

Video highlights of Audrey’s speech during the graduate student commencement ceremony and photos of the historic occasion can be found at the bottom of the page.

Audrey Carlan might have earned the first WPI graduate degree ever awarded to a woman 60 years ago, but her curiosity for science today is just as consuming. Carlan, who is flying in from her home in California to receive an honorary doctorate this week, is proof that a scientist’s spark burns continuously.

A pioneer in her field and a trailblazing working mother, Carlan’s focus on acquiring both a rigorous education and relevant skills remains to this day. She recently completed a class in the ethics of driverless vehicles because the issue concerns her greatly. And she’s watched The Martian three times, considering the real possibility of humans living on another planet. Her accomplishments as a scientist at a time when few women entered the field show how her foundation in skills and education are a powerful match.

At Thursday's graduate commencement, WPI will honor Carlan’s historic accomplishment 15 years before its first female undergraduate degrees were awarded. But for Carlan, who declined to take that victorious walk across the stage to get her diploma in 1957 because she was mere weeks away from delivering her first child, the return to “Worcester Tech” is a reminder of not only her academic and professional accomplishments, but her love of science and math that began when she was a junior high student in Brooklyn.

Carlan shined in school. “I just loved math,” she says. “In junior high, the teachers were teaching us how to plot lines, and I thought they were such fun. I loved it.” But a quick look around the room made her realize her joy wasn’t widely shared. “The people around me had such wrinkles on their faces,” she says. Her proficiency led to school-wide math awards in junior high and high school.

In fact, math was the catalyst for meeting her late husband, Alan, with whom she shared 55 years of marriage until his passing in 2007. Carlan was sitting with her friends in analytical geometry, her first class at Brooklyn College, when they noticed a boy in the front looking their way. Surprised (“they thought I was one of the guys”), they were convinced he was looking at Carlan.

That boy turned out to be from her Flatbush/Ocean Parkway section of Brooklyn. And the rest is history. He was impressed that she didn’t get seasick like all the other girls on his boat, and she helped him with trig. They married, eventually took jobs at American Optical Company in Southbridge, and began taking WPI classes offered at AO. When the classes moved to the WPI campus to support the fledgling physics graduate program, Alan encouraged her to continue. Carlan’s academic project, in which she worked on the electromagnetic scattering properties of spheroids on a massive IBM 650 console, is considered the first computer science project at WPI.

The two were the only students from American Optical who continued classes on campus, so their simultaneous graduation, both with master’s degrees in physics, was especially remarkable. Carlan’s advanced pregnancy made her hesitant to walk across the stage for her hard-earned degree for fear of slipping. “I was afraid of scaring the boys,” she says with a laugh.  When their son, Steve, was born soon after graduation, he became the first baby born to an alumni couple. Carlan, who refers to her late husband as her true soulmate, remembers tucking the baby’s bassinet under a lab bench while Alan continued additional work at WPI.

Following the example set by her mom, who became a stenographer and secretary at a young age to help support her own mother, Carlan knew education and skills were the ticket to satisfying work that could make a difference. “She had the skills,” says Carlan of her mom, and she went back to work when Carlan was 10. Both Carlans had similarly strong work ethics (Audrey paid for a family refrigerator at 16; Alan’s money from paper deliveries paid for a family washing machine before he was a teen), and made a life filled with interests as varied as square dancing and sailboat racing. They raised two sons and a daughter in California. “We were very well paired up,” she says.

Earning an MS was the beginning of a career in which Carlan paved a path so many working moms face today. But in an age when fewer than half of mothers worked outside the home, Carlan not only thrived in the workplace, but was able to carve a niche and a career that nourished her curiosity.

To this day, science holds an unmistakable appeal for her. “It’s fascinating,” she says of her field. American Optical gave her a glimpse of what was to come—fiber optics and lasers—and was where she worked on the earliest continuous vision lenses (now known as progressive lenses). Her team also worked on Todd-AO, the groundbreaking film projection system for the big screen version of Oklahoma!, even receiving passes to attend the movie premiere in New York City. “That was really something,” she says. “It was really fantastic.”

Discrimination was prevalent in her male-dominated field, but she rarely encountered it directly. There was the one time when she was working as a mathematical scientist and asked for more work as she had just finished a project. “Well, you can get me cup of coffee,” she recalls her colleague saying. She refused. “That’s the only time I really had to put a guy in his place,” she says.

While many companies wouldn’t even hire a married woman in the 1960s, Carlan’s skills gave her an edge. “For me, having my MS was important and helped me get a job,” she says. “Companies didn’t hire too many married women who wanted to work part time.”

Within years, she moved to teaching, in part for the flexibility. She is a professor emeritus of mathematics at Southwest Community College in Los Angeles and also authored Everyday Mathematics for the Numerically Challenged.

“They [her fellow graduates] have up-to-date science, and they will invent new stuff. By the time they are my age, which is 60 years from now, they will have done immense work … they will be doing wonderful things.” -Audrey Carlan

Ever the scientist, Carlan’s concerns are globally focused. “I’d like to see ethics and morality in robots,” she muses, mentioning that scientists have to be “very, very careful” when considering advances in technology like robots or autonomous vehicles. “What should you do if you’re in a car that drives itself and you come across something that looks like it could be an accident situation? Or perhaps people are ahead of you walking across the street? If you have a car that drives itself, the car might not see those things until it’s too late to stop. So the point is, who is responsible for this? I am worried about that.”

Carlan says she can only imagine what the future holds for the graduates who will share the stage with her.

“They have up-to-date science, and they will invent new stuff,” she says of her fellow graduates. “By the time they are my age, which is 60 years from now, they will have done immense work … they will be doing wonderful things.” With a slight pause, her thoughts turn to the possibilities and the idea makes her chuckle. “But they’ll probably be doing it on Mars. It’s just a new world out there.” 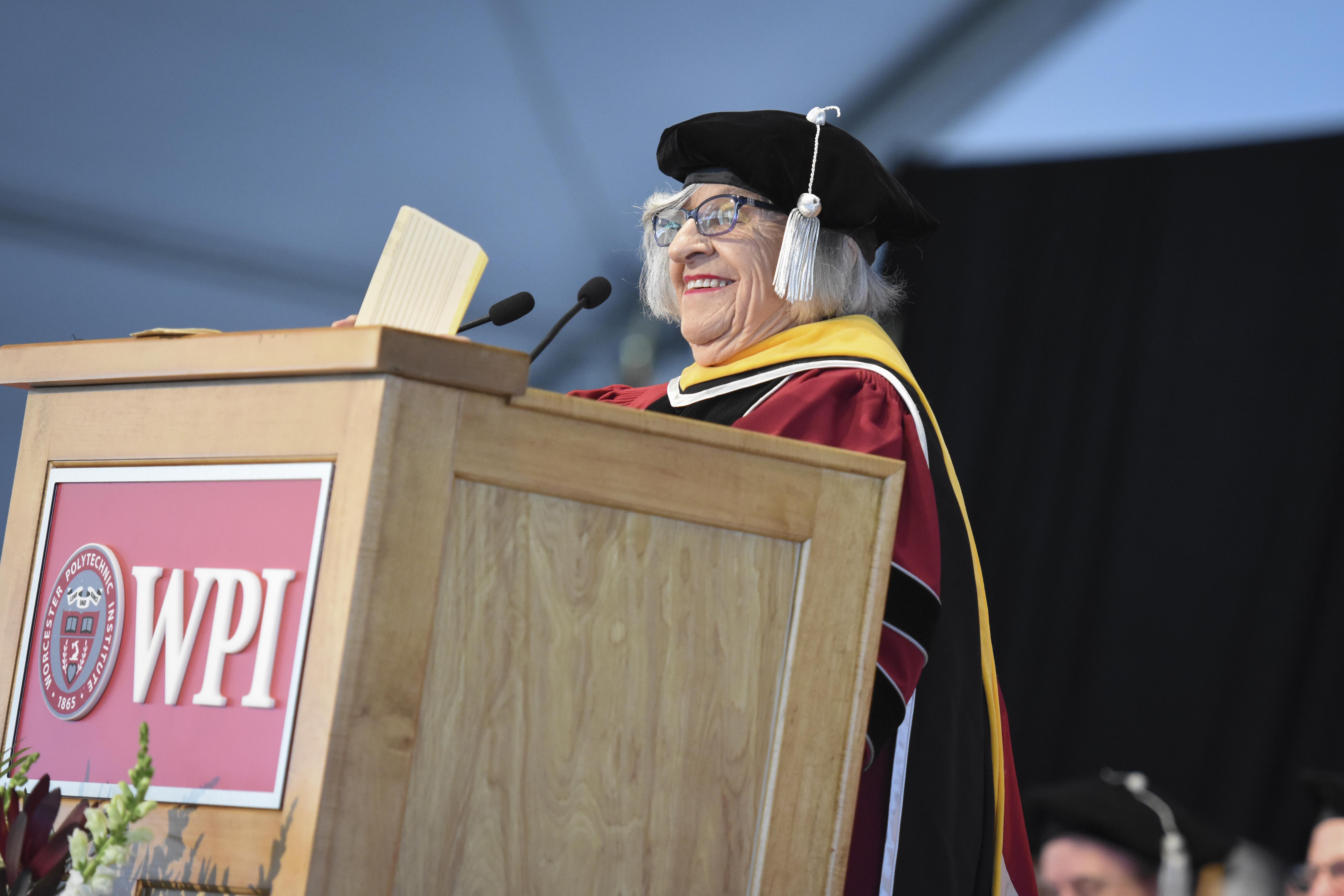 Audrey Carlan speaks to graduates at the 2017 Graduate Commencement Ceremony. 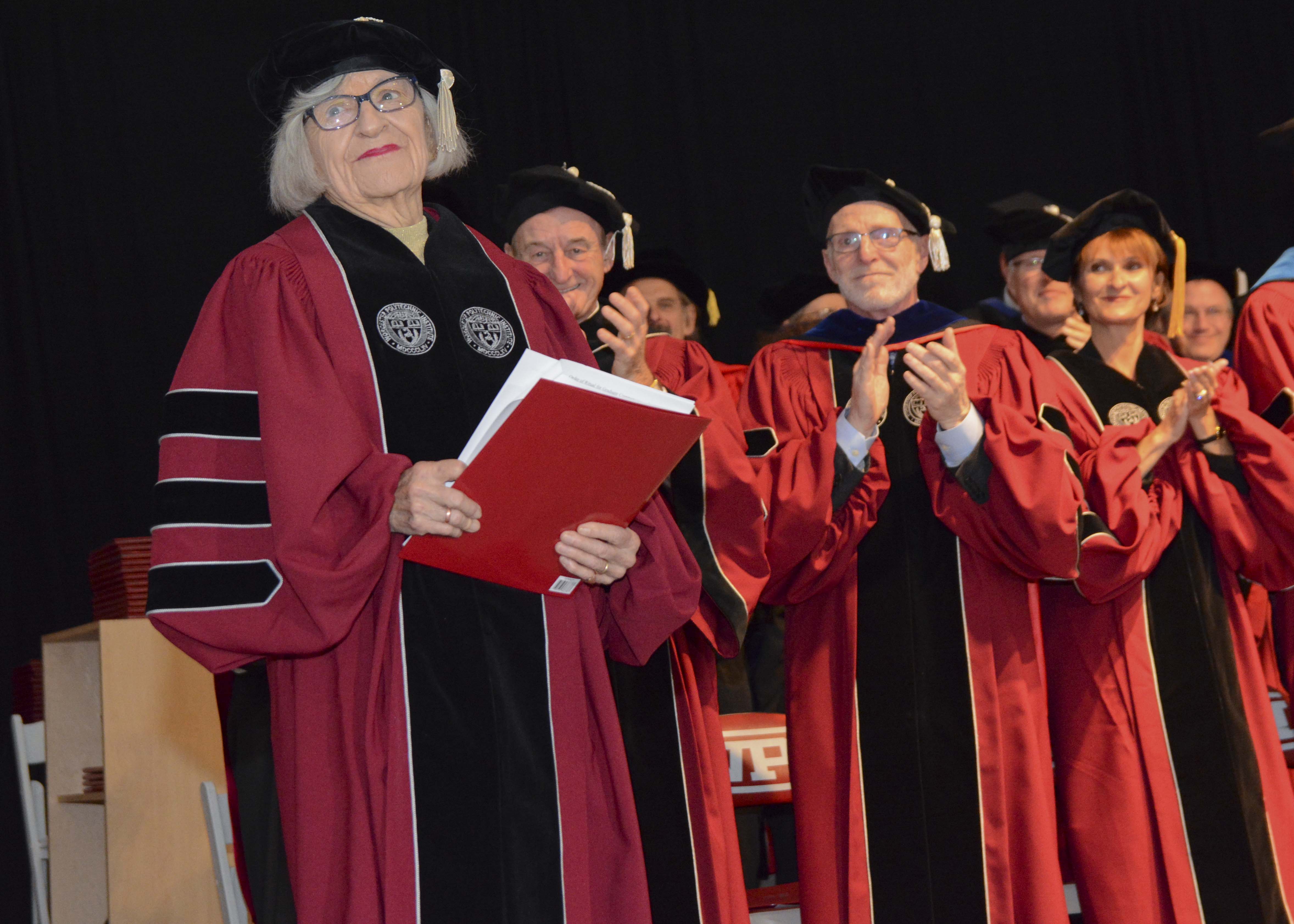 Carlan receives a standing ovation during the ceremony. 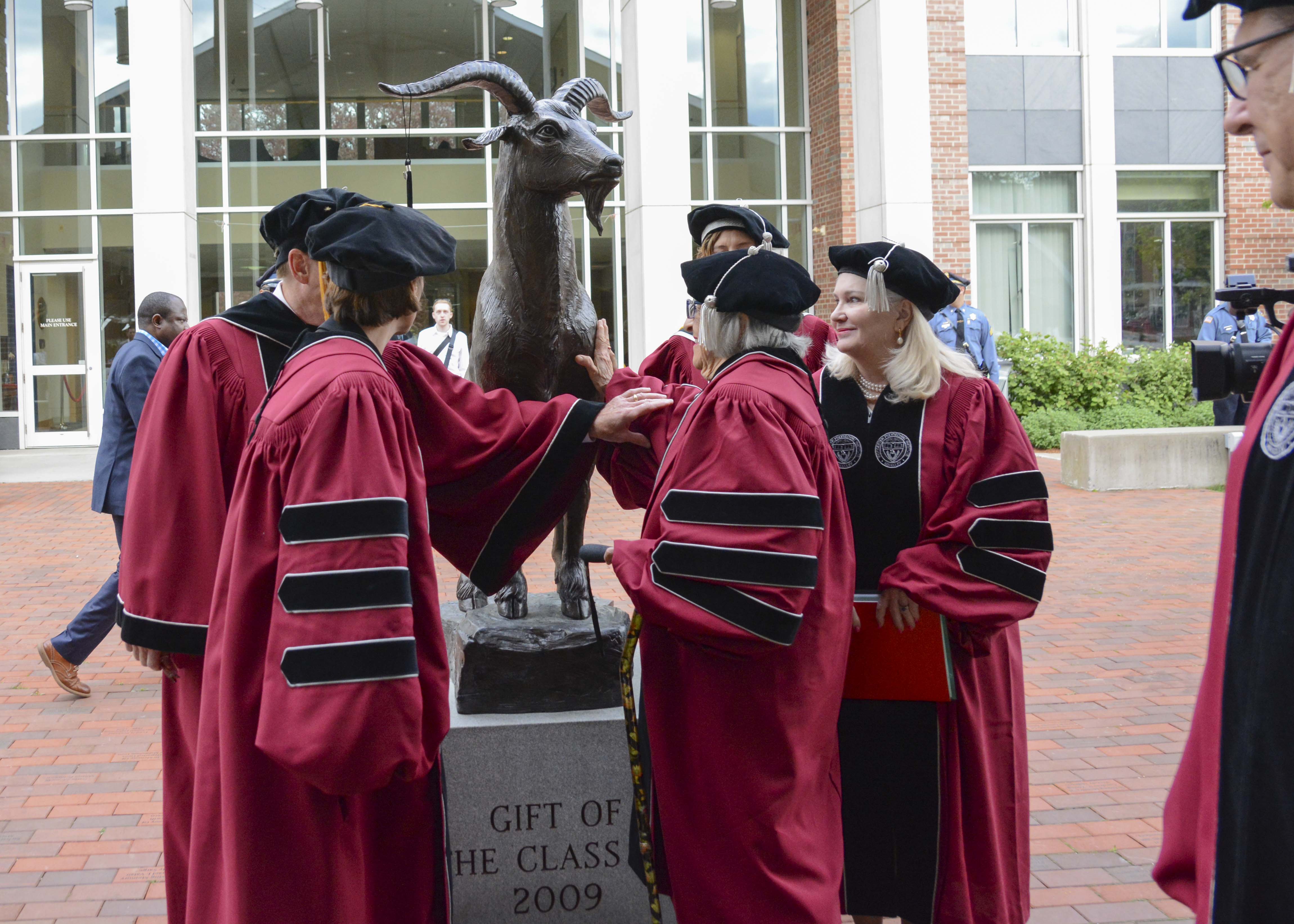 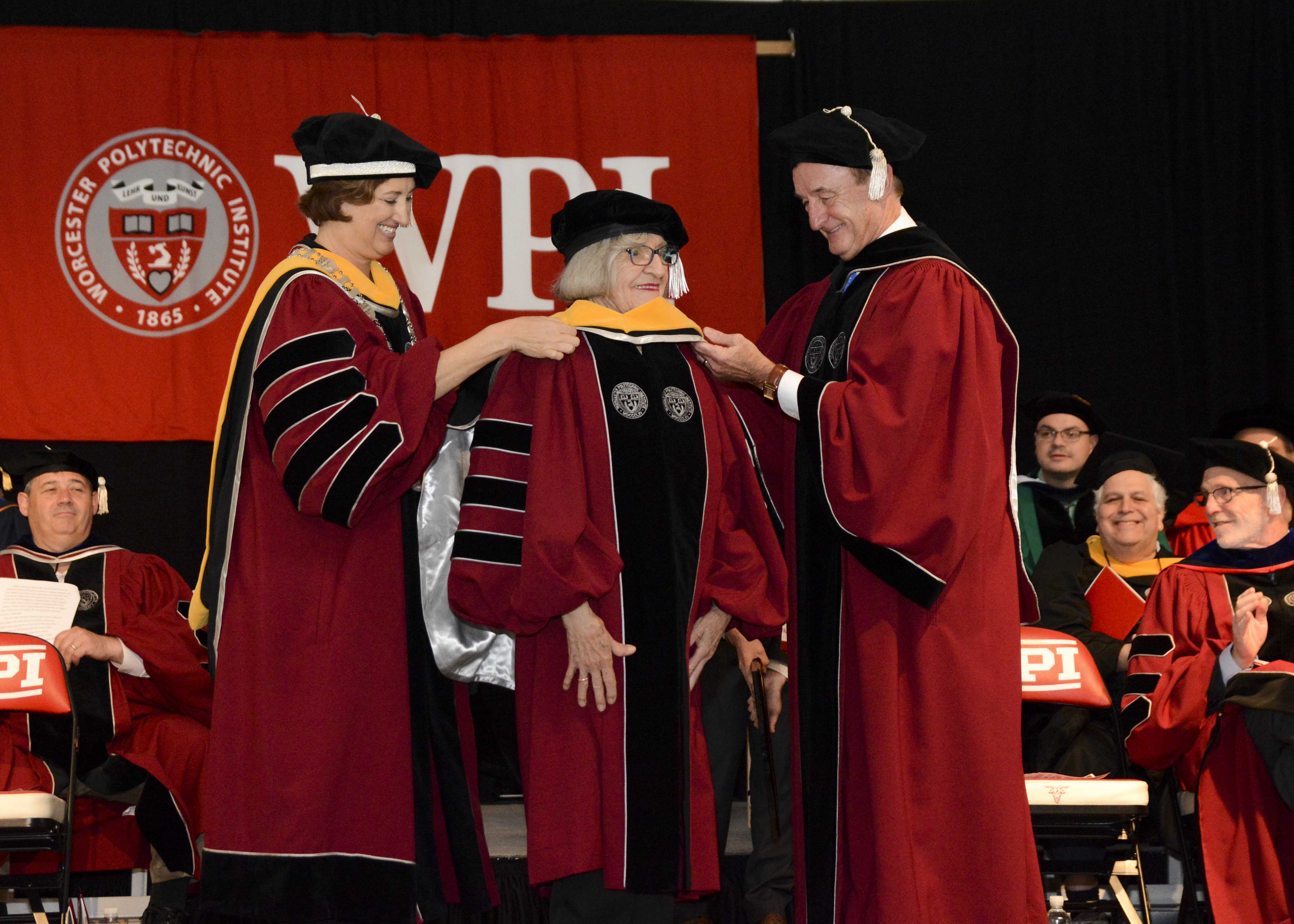 Carlan is honored by President Laurie Leshin and WPI Board Chairman Jack Mollen. 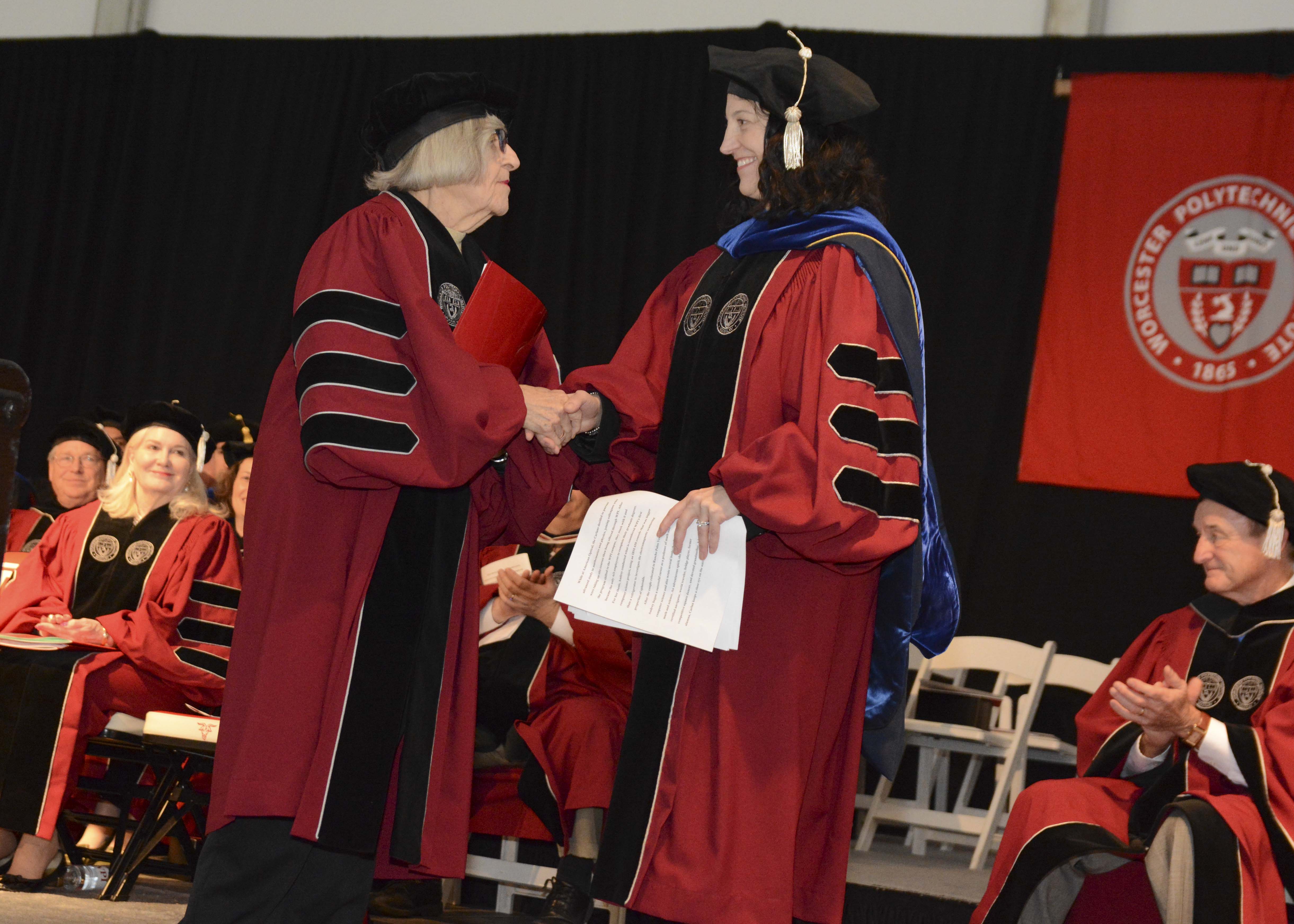 And the future? You are all the future. There is more to look forward to and you will be in the forefront of it all!
A lot has changed since the 1950s and, of course, I am so happy to see the number of women who are eager to use their enthusiasm, creativity, and intelligence.
One professor gave me a card to stick on the restrooms when it was needed. The card contained the word 'Woman,' and I was to knock first to make sure the coast was clear.

First woman to graduate from WPI

First woman to earn a degree at WPI returns to campus for a timely honor.

Hear more from Audrey Carlan in this report from WBZ-TV.