Seasoned entrepreneurs know failure is most definitely an option, says Todd Keiller. He also knows that a little passed-down knowledge can make all the difference for new entrepreneurs who are trying to find footing with an idea.

Keiller, director of the Office of Technology Commercialization (OTC), is so passionate about ensuring that entrepreneurs understand the difference between a good idea and a market-worthy idea that he spearheaded the application for WPI’s designation as a National Science Foundation (NSF) I-Corps site (and persisted even after the first two applications were turned down).

Entrepreneurs may apply for the 10-week intensive I-Corps site program, a NSF-funded, course-based program that helps student and faculty entrepreneurs decide if an idea they have is actually going to fill a need in the market. If so, they then take steps to move a project closer to market.

I-Corps is part of the innovation and entrepreneurship (I&E) ecosystem at WPI. After introductory pitch presentations about their work, teams are matched with an experienced mentor who will work with them throughout the remainder of the course. At WPI, most mentors are members of the Tech Advisors Network, an all-volunteer group of seasoned entrepreneurs who offer advising and networking to WPI entrepreneurs.

According to Keiller, WPI’s I-Corps began several years ago, although unofficially. Keiller, who acted as a mentor for WPI’s Battery Resourcers in the national I-Corps program, knew the value inherent in the program. While waiting for the I-Corps site status application to come through, he started a pilot program at WPI based on the I-Corps structure. 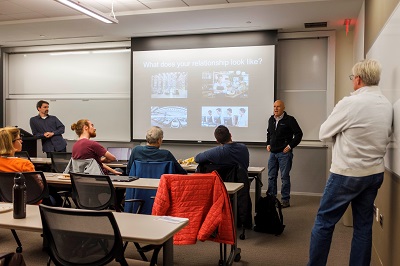 The current three-year, $300,000 grant will support 20 teams annually (10 in fall, 10 in spring). Teams are required to complete at least 30 customer interviews and assigned coursework, as well as attend the four class meetings in that time. In-class feedback can be daunting, direct, and unflinching as the purpose is to focus on an idea and get crucial customer feedback, not give high fives.

Larry Genovesi ’81, CTO and vice president of engineering at Embue, Inc., is GrowBox’s I-Corps advisor. A vertical growing business venture, GrowBox is run by five WPI past and current students who have gone through several iterations of the project, thanks to Genovesi’s advice. He says the process can be a blow to the ego, but with the distinct benefit of being in a protected environment. “This is humbling,” he says of the in-class feedback that’s often more critical than positive.

But, he says, if these early entrepreneurs can’t come back with satisfying answers in this situation, they will have a much harder time in the real world. “There’s a distinction between a good idea and a good idea people will pay money for,” he says. “If you go in unprepared, you will have your head handed to you.” This process, he says, might be bruising, but not nearly as devastating as having a business fail after you’ve poured your own and others’ money into the venture.

The challenging customer interviews are an essential step in the process. Teams approach potential customers to see what their pain points are and what problems they’re having. “They are not trying to sell their product through this process,” says Sarah Mahan, licensing associate in the OTC. "Instead, it gives them an opportunity to really narrow down who their target customer will be."

Marc Printz ’19 and Nathan Rosenberg ’19 are part of the five-member GrowBox business team that was accepted into the fall 2019 I-Corps cohort through the application process. Printz and Rosenberg, who first met during New Student Orientation, are no strangers to starting with ideas that fizzled, but they also have had a taste of success with GrowBox and that motivates them. I-Corps, they say, pushed them to pivot and take a better approach to their vertical growing business.

Preparation for Next Steps

At the end of an I-Corps process, teams know who their potential customers are and why they need the product. “If you can’t explain in a sentence what you’re doing, you’re not ready,” says Rosenberg. That is where mentors offer excellent advice. “The big benefit of having Larry as an advisor is that he’s done so much,” says Printz. “If we are trying to think of something hypothetically, he says, ‘I can tell you the best way of doing this because I’ve done it both ways.’”

I-Corps advisor (and previous participant) Joe Bush ’04 (BS, chemistry), vice president of product development at Battery Resourcers, says that while some entrepreneurs make assumptions about how a market needs their product or how their technology will fit into an ecosystem, the I-Corps process leaves little doubt. Bush, who has a PhD and is a successful entrepreneur, says, “This process shows where the weaknesses are. Entrepreneurs embrace that and understand what they have to do.”

Rosenberg says the WPI approach has served the GrowBox team well. “WPI taught us a framework for learning in situations like projects, working on a team or a technical project, and bringing everyone in,” he says.

Printz says WPI’s challenging pace also taught an essential element—grit. “At WPI, you are constantly working,” he says, noting that it’s good training for an entrepreneur.

As a group, successful entrepreneurs tend to give back because they often had, or wanted, a similar experience. “WPI as an institution played a very important role in my development,” says Bush, who has been involved in WPI’s I&E community for about five years, “and this program speaks directly to my personal calling to be part of this institution. The program feels very natural for me to give back. I think many who do this look at the students and see something of themselves.”

Genovesi, who started his first of many companies as a WPI student, loves being an entrepreneur and especially enjoys helping others who have the same passion. He notes, “I like to think what I see in them is what [my mentors] saw in me.”

Editor’s Note: This story has been updated with a postscript at the end of the article. It was originally published on Dec. 11, 2019.

I-Corps is ramping up for fall after eight teams successfully completed the program in winter 2020. Due to the COVID-19 pandemic, the final winter class took place remotely. Plans for fall include remote classes and Zoom meetings for student teams, their mentors and potential customers. In some ways, the pivot to remote activities has been positive. “It’s easier to persuade customers to give up some time for a Zoom meeting than an in-person meeting,” Keiller says. Applications for the fall session of I-Corps is open now. You can learn more here.