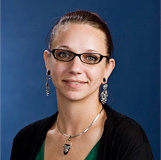 Erika Hanlan is no stranger to hard work. As the administrator of theatre technology at WPI, Hanlan has overseen the technical and managerial aspects of the Humanities and Arts Drama/Theatre program since 2010. She brings together students with diverse backgrounds and interests to produce shows that run during the academic year at Little Theatre. Additionally, Hanlan teaches two Inquiry Practicums, a theatre workshop, and a Theatrical Production Management course.

Now she can add another accomplishment to her resume.

When you bring backgrounds in physics, robotics, chemical engineering, computer science together, sometimes … the results are amazing,” says Hanlan.

For the past two seasons, Hanlan has worked as management and production consultant with the Harbor Stage Company in Wellfleet, Mass. Her involvement in the company’s most recent production, an adaptation of Anton Chekov’s “The Seagull,” earned Hanlan an Actors’ Equity Union Card. The Actors’ Equity Association is a labor union that represents more than 49,000 actors and stage managers in the United States. As a cardholder, Hanlan can stage manage for any Equity theatre company and receives a wide range of benefits, including health and pension plans.

“I’m honored to receive my Equity card,” Hanlan says. She notes that the six founding members of the Harbor Stage Company are amazing artists who have poured their souls into the company.”

Hanlan isn’t the only Equity cardholder at WPI. Professor Susan Vick, director of theatre, has been a member for many years. A 32-year WPI theatre veteran, Vick heads a department that Hanlan describes as an “important piece of WPI where there is a place for every kind of involvement and interest.” Students get hands-on experience in every part of the production process, from designing to directing and producing. The program is a creative outlet for a mix of students who offer unique perspectives to solving theatrical problems.

“When you bring backgrounds in physics, robotics, chemical engineering, computer science, etc., together, sometimes it leads to projection mapping for a festival or automated doors for a show with ghosts. The results are amazing,” says Hanlan. 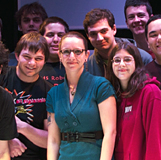 While some may question the value of a theatre program at a technical school, Hanlan maintains it is an essential tool for developing necessary life skills.

“Theatre teaches you how to work on a budget, with an inflexible publication deadline, with all sorts of different people. It teaches creative problem solving, collaboration, project planning, and it provides another way of looking at and exploring the world around us, whether real or fictitious.”

Hanlan says her ultimate goal is ever-changing. She’s thought about stage managing for Broadway, but insists that great theatre doesn’t exist exclusively in New York. Hanlan wants to deliver memorable theatre in Massachusetts, one day hoping to open an arts center where she can explore the “links, ties and overlaps between the arts and management.” She has personal ties to Massachusetts, too. While interning with the Wellfleet Harbor Actors Theatre in 2006, she met her future husband, a WPI alumnus, whom she married in May.

For now, Hanlan is happy in her role as administrator. She’s looking forward to the major productions that will take place in B- and D-Terms, the latter showcasing the 32nd year of the New Voices festival. Up to 150 students participate each term, and although the shows are well attended, Hanlan says she would love for more people on campus and in the community to experience the inspired work of the WPI theatre program.