There is wisdom in revisiting the past when it’s done constructively. 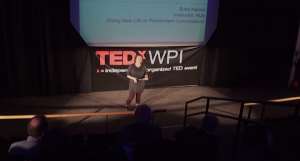 • That’s the philosophy behind the post-production discussions that Erika Hanlan of Humanities and Arts has brought to WPI’s Little Theatre and the Drama/Theatre program.

The discussions, held after each production, have been so successful that in April she filmed a TEDx Talk on the subject, called “Giving New Life to Postmortem Conversations.”  It’s available online here.

Open to all who have been involved in a given production, the optional conversations focus on a respectful approach to figuring out what worked, what didn’t work, and how to do it differently in the future.

Most of the participants have been in technical, managerial, and design roles, says Hanlan, though actors have also attended.

As the administrator of theatre technology and an adjunct instructor,  Hanlan initiated the concept three years ago, shortly after she arrived at WPI.  After she observed a similar process among congregants at her mother’s church, she thought the structure might work well in a theatre setting.

“Overall, the process creates an ownership of the conversation through active participation,” she says, “and this can be useful in just about any setting.  However, there are some similarities between the involvement of our students within theatrical productions at WPI and members of a church congregation. Motivation is not monetary, but comes from a desire to be involved and to participate. There is a sense of community and belonging, a way of looking at the world. This process brings the discussion from within the participants, rather than its being brought to them.”

At WPI, Hanlan oversees the technical and managerial aspects of the Drama/Theatre program, including the same aspects of productions in the Little Theatre. Her role heightens during B- and D-Terms, during major academic productions, though she steps back at other times to give students more experience and independence.

The post-production discussions are a natural extension of her deep interest in arts management, or “the process of how all of the pieces of an artistic endeavor come together.” Moreover, just as they help participants identify ways to improve or change certain elements of future productions, so too have the discussions themselves evolved with the benefit of hindsight.

Though she at first imposed a structure that highlighted the abstract rather than the specifics of a particular production to avoid talking about individuals, “it became clear that this abstract structure was not necessary and that participants were very capable of respectful conversation,” she says.

Inevitably, some issues come up repeatedly, and Hanlan, as the facilitator, has seen patterns emerge over time. She and other repeat participants are able to draw on past discussions in new conversations.

Given the broad applicability of post-mortem assessments in a non-threatening, accepting, and open forum, it made sense to Hanlan to bring the concept to a wider audience through TEDx talks.

“We may use this idea in our theatre program, but the concept can really be used for any team/project-based environment,” she says. For that reason—and knowing that the talks are posted online—she addressed “the subject in a way that anyone watching would be able to understand the topic and possibly make use of the process.”