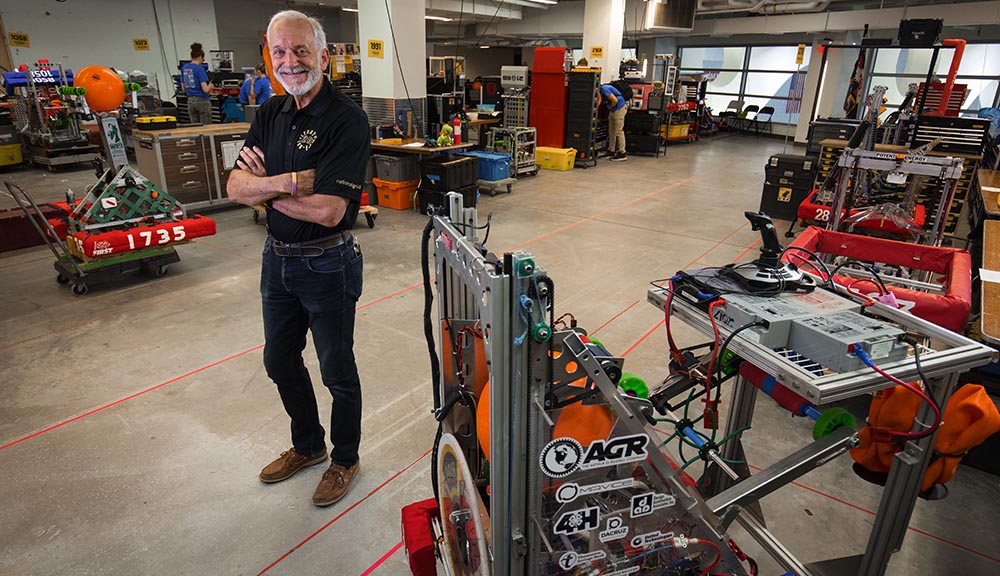 “This Has Been the Best Job of My Life”

When you leave Ken Stafford’s office after talking with him about his life and 25 years at WPI, it’s hard not to be in awe.

After all, here’s a man who helped pioneer WPI’s robotics engineering curriculum, thrillingly boated down Venezuelan rivers loaded with piranhas (after sailing to the rivers from the United States), visited 63 countries, traveled all 50 states, sailed some 10,000 miles, has run approximately 20 marathons, and has flown nearly one million miles––including his time as an Air Force navigator whose mission was to capture deorbited space hardware mid-air.

“My life has been very interesting, and I intend it to remain so,” says Stafford, teaching professor in undergraduate studies, who is set to retire this summer after a quarter century at WPI. “I’ve done everything I’ve wanted to. I’ve discovered pleasures in small things.”

Along the way Stafford has inspired countless students, his love for learning and passion for teaching robotics evident to students and colleagues alike. His most recent honor is the 2019 Board of Trustees' Award for Outstanding Teaching in which he was described as “the single most enthusiastic and energetic member of the teaching staff at WPI.”

The recipient of the 2010 Denise Nicoletti Trustees Award for Service to the Community, Stafford has also served as advisor or mentor to many student clubs, organizations, and individual students. 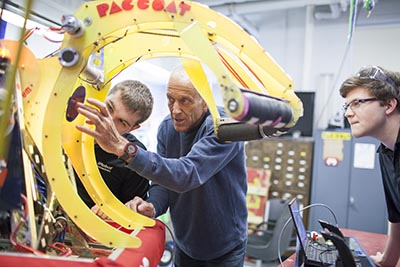 “This has been the best job of my life,” he says. “I will mostly miss the opportunity to engage with the first-year students as much as I have in the past. I really love the sense of confidence and self-awakening that can develop from compassionate, empathetic advising.”

Outside of the classroom, he has also guided students in a number of robotics competitions, including the FIRST Robotics Competition, BattleCry, BattleBots, SailBot (which concluded earlier this month), and FIRST LEGO League.

A Call to Robotics

Stafford says he always loved building things. “As a kid I was always making airplane, car, and rocket models.  Although I was a whiz at my Erector Set, the favorite toys my dad would bring home for me is what we called neat junk,” he recalled. “These ranged from an old X-Ray Science machine with gobs of cool mercury in it to a 1929 non-running Ford Model A. It took me a year, but I got it running.”

He went on to receive a BS in mechanical engineering from Oregon State University and an MS in aeronautical engineering from the Air Force Institute of Technology. A retired U.S. Air Force colonel, he joined the WPI faculty in 1994 after 21 years of active duty, serving as commander of the university’s Air Force ROTC program and teaching professor in aerospace studies. He eventually became director of WPI’s Robotics Resource Center.

He took a year off from WPI from in the late 1990s to sail with his family down the North American and South American coastlines; upon his return the associate provost asked him what he knew about robotics. Expressing enthusiasm and interest in robots, Stafford soon found himself in charge of WPI’s fledgling program and assuming leadership of Team 190, a joint WPI and Mass Academy FIRST Robotics Competition team. 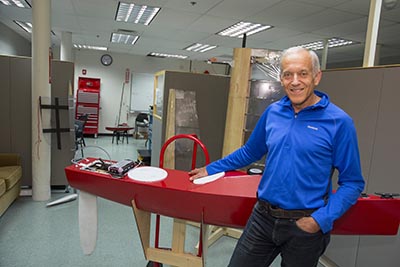 The success of that Introduction to Robotics course remains close to his academic heart. “While only the first course of our amazing robotics engineering curriculum, I think it does an unusually good job at providing not only an accurate view of robotics engineering, but—just as important—a comprehensive overview of what should be expected of all WPI graduates,” he says, “including training and evaluation of small-team efforts, independent research, presentation skills, project work, student-to-faculty interaction, and, above all, active learning.”

One of the WPI alumni influenced by Stafford is two-time BattleBots Champion Paul Ventimiglia ’12, now a robotics engineer in California. In 2007 he took first place as head of the WPI team in the BattleBots IQ College Division. Two years later, in the NASA Regolith Excavation Challenge, he won the top prize of $500,000 for Moonraker, a robot that could potentially harvest lunar soil.

“Ken Stafford was the single, most helpful person in my academic career, and I know he was mentoring hundreds of other students at the same time,” Ventimiglia said. “Ken was a big part of why I enjoyed my time at WPI so much. He was a great role model for working hard, being honest, and having fun!”

Stafford’s retirement this summer will serve as the catalyst for his next big adventure, which, he admits, he’s still figuring out. However, that doesn’t mean he’ll be idle. On his list this summer is to drive across the country—in style—with his wife, Sandra. An avid car lover, Stafford owns a vehicle with a 19-speaker sound system and massagers built into the seats that is ready for the open road. The couple will also be kayaking, camping, and attending the wedding of one of Ken’s former students.

Stafford says he will miss the day-to-day interactions with the entire campus family. “I cannot travel from one building to the next without a grounds person, custodian, campus police officer, staff member, administrator, or other faculty member greeting me by name,” he says.

But he was clear about one thing: he will remain involved with WPI. “My last day in the office doesn't mean my last day at WPI,” he says. “It has such a sweet spot in my heart.”