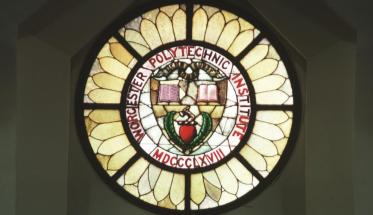 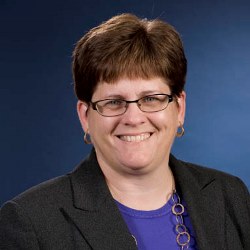 Sharon Johnson, professor in the Foisie Business School, received the Chairman’s Exemplary Faculty Prize. The prize, in the amount of $10,000, recognizes WPI faculty members who excel in all relevant areas of faculty performance, including teaching, research and scholarship, and advising. The tradition of awarding the prize was established in 2007 through the personal philanthropy of Donald K. Peterson '71, then chairman of the WPI Board of Trustees. It has been continued by current board chairman Jack T. Mollen.

In her research, Johnson applies her expertise in industrial engineering and lean process design to help organizations perform better, achieve more with less, and become more nimble. Much of her recent research has focused on how these disciplines are applied in healthcare, particularly through the careful application of information technology. As founder of WPI’s Healthcare Delivery Institute and principal investigator on more than $3 million in external awards from the National Science Foundation, the Veterans Health Administration, and other agencies and organizations, she and colleagues at WPI and partners at a number of healthcare institutions have tackled a wide range of practical problems in healthcare. These have included the challenges and potential benefits of using electronic medical records systems and methods for applying lean and other quality methodologies to support implementation of healthcare innovations.

Johnson’s innovative spirit has also shone in her work as an educator. She led the development and implementation of WPI’s BS program in industrial engineering in 1995 and, as the program’s longtime director, she led it through three accreditations by ABET (Accreditation Board for Engineering and Technology). She has also created a hands-on “lean lab” for teaching lean process design, which is completed by hundreds of students at WPI and other universities; developed the Health Systems Innovation Certificate; and was instrumental in establishing the Physicians Leadership Development Program in collaboration with the Healthcare Delivery Institute and WPI’s Corporate and Professional Education division. She has also been active in service to the university and her profession, for example as conference chair of the 2018 Engineering Lean Six Sigma Conference and a member of the editorial board of the Engineering and Lean Six Sigma Review. 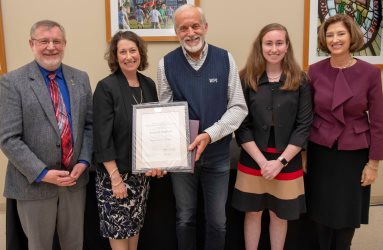 Kenneth Stafford, teaching professor in Undergraduate Studies, received the Board of Trustees' Award for Outstanding Teaching. Established in 1959, the award recognizes faculty members for excellence in teaching coupled with outstanding professional contributions. Described in his award citation as “the single most enthusiastic and energetic member of the teaching staff at WPI,” Stafford exemplifies the role of an outstanding teacher. Having helped pioneer WPI’s robotics engineering curriculum, he has excelled in teaching its introductory courses and has inspired dozens of student teams completing the Major Qualifying Projects he has advised. With a “sparkle in his eyes and a passion and fire for teaching robotics, he cares deeply about the success of his students, in and out of the classroom, and he shares his love of learning as he goes out of his way to allow them to engage and learn,” his citation noted. Stafford joined the WPI faculty after 21 years of active duty in the U.S. Air Force, including five as commander of the Air Force ROTC program at WPI and head of the Aerospace Studies Department. He holds a BS in mechanical engineering from the University of Oregon and an MS in aeronautical engineering from the Air Force Institute of Technology. 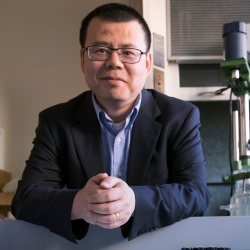 Yan Wang, William Smith Foundation Dean’s Professor of Mechanical Engineering and director of the Electrochemical Energy Laboratory, received the Board of Trustees' Award for Outstanding Research and Creative Scholarship. The award recognizes continuing excellence in research and scholarship by faculty members over a period of at least five years. Wang is recognized nationally and internationally for his research in energy storage, particularly his pioneering work on the recycling of lithium-ion batteries. When he began this work nearly a decade ago, few researchers were focused on this important problem. Since then, his research has received significant funding from the federal government and industry and has resulted in high-impact papers, a number of patents, and a Worcester-based start-up company, Battery Resourcers. As his citation noted, through his work Wang “is bringing enduring recognition to this university and positive change to the world.” A member of the WPI faculty since 2010, he earned a PhD in engineering materials at the University of Windsor in Ontario and completed a postdoctoral appointment at MIT, where he participated in the design of a lithium-ion microbattery. 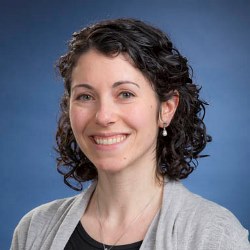 Scarlet Shell, assistant professor of biology and biotechnology, received the Board of Trustees' Award for Academic Advising, which recognizes the important role that academic advisors play in guiding and mentoring students through stages of professional and personal development. According to her award citation, Shell puts WPI’s mission of blending theory with application into practice by “bringing out the best in her students and sharing her passion for research through mentorship.” Students say they value “her willingness to listen to the opinions of others,” noting that her encouragement brings out the best in everyone. They say she cares about students as individuals and checks in with them often. As one student noted, “Being her student is not an easy task; she expects great things from you. But she also gives all of herself to help you out.” Shell, whose research focuses on the regulatory mechanisms that underlie bacterial tolerance of environmental stresses, holds a PhD in biomedical sciences from the University of California San Diego. 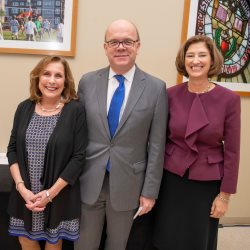 Linda Looft, assistant vice president for government and community relations, received the Denise Nicoletti Trustees' Award for Service to Community. Established in 2003 in memory of WPI’s first tenured female faculty member in electrical and computer engineering, it is presented to a member of the faculty or staff in recognition of passion and action in serving the needs of a community. A member of the WPI administration since 1996, Looft has helped WPI navigate a changing political landscape, both locally and nationally, and has built a tremendously strong network of support for the university. She has been an active member of the WPI community, serving on the Sustainability Committee, the TouchTomorrow Planning Committee, the Seaport Advisory Committee, and the inauguration committees for three WPI presidents. She has also served on the boards for numerous organizations in the greater Worcester area, including the Worcester School Committee, the Worcester Education Collaborative, and the Greater Worcester Community Foundation, Her support for the Massachusetts Academy for Mathematics and Science at WPI helped it survive a threatened budget cut in 2009. The high school has graduated 500 students in the ensuing decade. 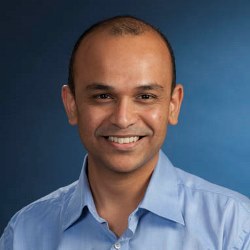 Raghvendra V. Cowlagi, assistant professor of mechanical engineering and aerospace engineering, was one of two recipients of the Romeo L. Moruzzi Young Faculty Award. Presented in memory of a longtime faculty member in electrical and computer engineering, the award recognizes innovation in undergraduate education. Cowlagi was honored for taking a unique approach to teaching control theory that reduced the steep learning curve and lowered the motivational barriers associated with the “theory-first” approach traditionally taken with this senior level course. He incorporated projects and real-world examples and, most significantly, introduced personalized experiments that students complete at home. His students reported increased learning and motivation, and were even able to tackle challenging concepts normally not introduced until graduate-level courses. Cowlagi, who joined the WPI faculty in 2013, earned a PhD in aerospace engineering at Georgia Institute of Technology. 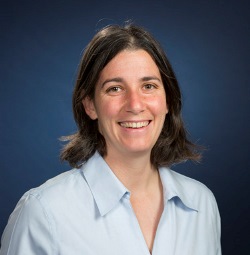 Sarah Wodin-Schwartz, assistant professor of mechanical engineering, also received the Romeo L. Moruzzi Young Faculty Award. She was honored for her innovative use of high-impact practices to increase student engagement in introductory mechanics courses. Her goals are to give students authentic experiences that connect engineering to its social outcomes and to foster inclusion and diversity. Her innovations include projects through which students see how engineering can be applied in real-world settings, for example in sub-Saharan Africa where the design of a cable anchoring system could permit the use of wind turbines to bring electricity to a remote village. Hands-on learning activities she created help students better understand forces and moments in the world around them. “Having become proficient in the hands-on environment, they are better prepared to analyze complex systems on paper,” her citation noted. A member of the faculty since 2015, Wodin-Schwartz received a PhD in mechanical engineering from the University of California, Berkeley. 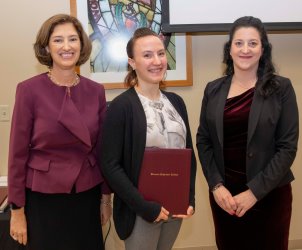 Cassandra Brzycki, a graduate student in chemical engineering, received the Teaching Assistant of the Year Award, which recognizes the contributions graduate students make to the quality and success of WPI’s undergraduate curriculum. The faculty who worked with Brzycki cited her deep disciplinary knowledge and the significant contributions she made to the improvement of their courses. In one course, she helped build a new software tutorial to help guide students through the most advanced computational tools in the field. The award citation noted that the students she assisted appreciated her mentorship and guidance, describing her as “passionate, knowledgeable, extremely generous with her time, and deeply dedicated to her students’ success.”