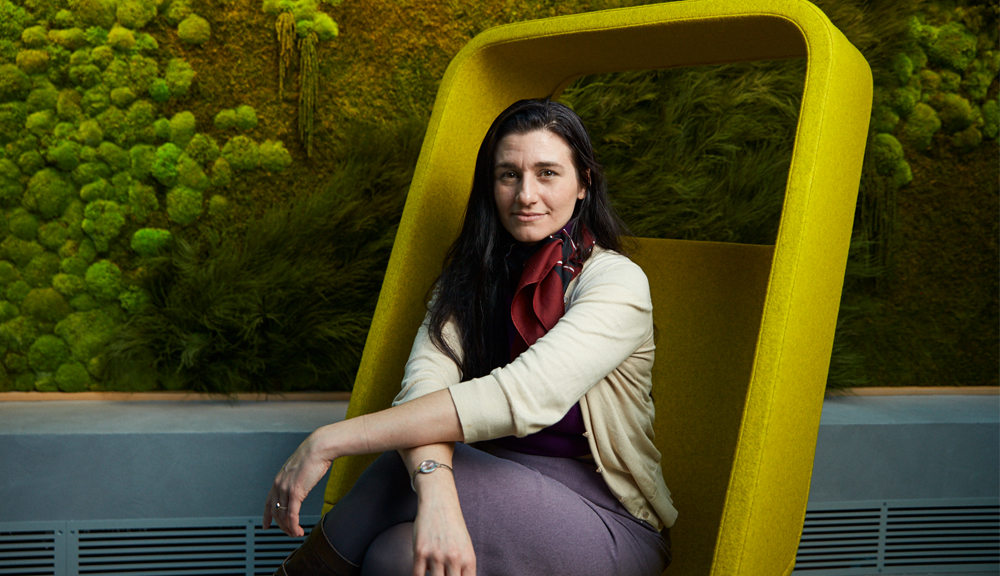 Everyone has a favorite organ, says Jenna Balestrini ’09, PhD BME. Her mother, a nurse practitioner who treated burn patients, had a special interest in the skin. Her WPI mentor, Professor Kristen Billiar, is partial to the heart.

“I am definitely a lung person,” Balestrini declares. Despite her preference, she doesn’t play favorites in her work at Draper, where she heads the Cell Bioprocessing program, working on tools to create an amazing array of cures for all parts of the body.

As an undergraduate in chemical engineering at Iowa State University, she worked on platforms and polymers for skin substitutes. Early on, she came to understand that research scientists and engineers think differently. “The engineer will apply knowledge and build the thing; the scientist will ask why,” she says. She resolved to pursue both in equal measure. 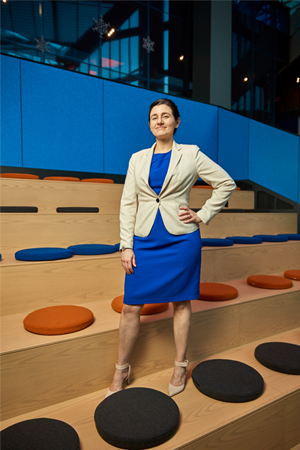 On a graduate admission visit to WPI, she found Billiar (who now heads the biomedical engineering department) using classical mechanical engineering principles to design heart valves. “He was young and hungry to learn,” she says. “I couldn’t have asked for a better mentor.” Billiar recalls their first encounter vividly: “She talked and talked and talked about different scientists in the field. She knew their work as well as I did.”

Together the two segued into skin and connective tissue—a bit of a stretch for the heart man—investigating how mechanical variables, such as stretch, load, stiffness, and scaffolding affect cell function. Many joint publications later, Balestrini’s pull toward the lung could no longer be denied.

“Look, I don’t really do lung,” Billiar told his mentee. Balestrini began connecting with key researchers in the field—and connecting him. “She’s one of the most passionate scientists I know,” he says, “and she’s definitely a people person. At conferences, she would introduce me to scientists in our field.”

The engineer will apply knowledge and build the thing; the scientist will ask why.
Jenna Balestrini '09 PhD BME

The social and political concerns around lung disease also intrigue her. “People think of the skin as your first defense, but I think it’s the lungs. The bioburden that lives in your lungs is a testament to what they’re combatting every day. And the architecture of the lung is just stunning!” she exclaims, urging a look at histology images she calls “gorgeous.”

Balestrini went on from WPI to postdoctoral work at the University of Toronto and then Yale, but the bond with her mentor remains strong. “Kris was the last person on the dance floor at my wedding,” she relates. He recalls the spirited, “friend-powered” wedding at her in-laws’ organic flower farm in Maine for a different reason. Minutes before the ceremony, clouds rolled in and the skies broke open—but there was no trace of stress or dismay. “They just broke out the drinks and started the reception early,” he says. When the rain stopped, the party moved outside, wiped down the chairs, and proceeded with the ceremony. “She doesn’t let anything get her down; she just keeps working at it, and that attitude makes a difference,” Billiar says. “Let me tell you, in lab things don’t work very often. Experiments fail all the time. That’s what makes the PhD worthwhile: The failures, and the problem solving required.”

At Draper, Balestrini serves as a senior member of the technical staff, but the organization’s matrix structure blurs hierarchies and boundaries in favor of fluid collaboration. She refers to the nonprofit as “a giant think tank—but we can design and build just about anything.” Primarily she’s building micro fluidic platforms for cells to live on while they are either being experimented on or modified for use as a therapeutic. “You can think of micro fluidics as ‘plumbing- on-a chip,’” she says. The goal is to recapitulate important aspects of the human body, allowing for precise manipulation of the many factors in the cell matrix that influence function. This provides researchers with a precision preclinical testing platform to create better, safer, and more efficient cell therapies for diseases ranging from cancer to sickle cell anemia, or even diabetes. 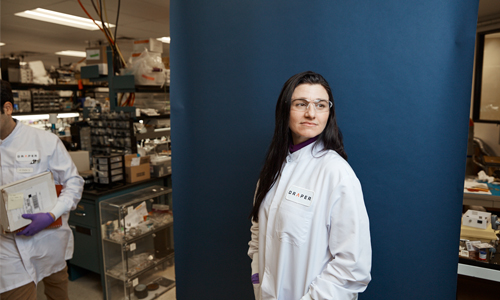 Every cell lives somewhere, and what’s happening in the neighborhood can be life-changing for a cell. “If we can understand how cells interpret who and where they are, we can use those same signals to manipulate certain cellular behaviors,” she explains. For example, the factors that make scars form and wounds heal could be exploited to grow tissue equivalents and replacement organs. Or cells from one’s own body could be reprogramed to fight diseases ranging from HIV or hepatitis to diabetes. She points out that her role isn’t to create these cures, but to build the tools that will allow Draper’s clients to make them. Part of the challenge is to come up with processes that eliminate the financial or processing “pain points” and make such customized therapies scalable and affordable.

In addition to the cell therapy work, Draper’s “organ on a chip” systems make it possible to efficiently run in vitro tests on a large number of cell samples in an environment that closely mimics the functions of the human body, including interactions between organs. With numerous “wells,” multiple compounds can be tested simultaneously, with real-time monitoring, before involving human subjects. Down the road, Balestrini projects, “You could test a sample from a person’s cancer in vitro to interrogate 20 different drugs and quickly figure out which ones would work best on that person.”

A current focus of her work— modifying cells using electroporation—might even make chemotherapy obsolete. She describes electroporation as “zapping” cells with electrical current to temporarily open tiny pores in the cell membrane, thus offering a brief window to introduce therapeutic components. “It makes it possible to ‘weaponize’ your own cells to fight your disease,” she says. She envisions a time when a patient could come in for a simple blood draw and leave after being re-injected with modified cells. “Electroporation allows us to impart altered genetic information across the cell membrane and into the cell. Once that’s integrated, it re-programs the cell to function in a way that could re- store function to a failing organ, for example, or target a particular cancer, based on the unique sig- nature from the patient’s tumor.”

Balestrini is looking forward to getting back to working on lung models again. Her voice lifts when she talks about it. “We’ve made lung models in the past, beautiful ciliated systems that are responsive to breathing, infection, or air ow. Typical in vitro lung models don’t have an immune system, but we can build in those components.” She is speechless for a moment, contemplating the prospect. “It’s the best organ. I’m always trying to get people to leave their organ of preference and come over to pulmonary work.”

[Jenna] doesn’t let anything get her down; she just keeps working at it, and that attitude makes a difference.
Kristen Billiar
Department Head, Biomedical Engineering

Her vision has always been wider, though, going beyond the cell, running deeper than the organ systems she studies. She’s been raised to look beyond the scientific or engineering problem, to see the impact on the person. Her mother’s tireless devotion to rehabilitating injured patients set a strong example. “I was driven to look for ways to restore function, not just to the body, but to the lives of the people that are impacted by their ailments,” she says. She also credits her mother with giving her the confidence to succeed in science. “You always hear about women needing strong female role models. There was one in my house every day!”

The love of science runs deep in her family, connecting them in compelling ways. When her grandmother was dying, one of her requests was for Jenna to read her thesis to her. In the acknowledgements section of the thesis, the final thanks (after Billiar and her “greater Worcester family”) go to the person who first sparked her love for the sciences: her paternal grandfather, a nuclear physicist at Los Alamos. She describes him as a classical physicist whose interest extended to biological problems. He developed a technique for using photons to treat cancer in the brainstem, which is still used in some intractable cases. Grandpa Silvio Balestrini took little Jenna to the Los Alamos observatory to look at the stars, and her first lessons in chemistry and physics were conducted in his lab. “He made me a little lab coat with my name on it, and that just sealed the deal,” she says. Grandpa amazed her with a demonstration of the sublimation of dry ice—a lesson that changed her life.

“With that, he liberated me from the idea that what they teach you in school is all there is. Because in school, you learn that solids turn to liquids, and liquids turn to gas. He taught me that some rules can be broken, and that science can be more interesting than what you learn in class. Her thesis dedication concludes, “Although it has been years since you have passed, I still take your lessons with me, every day.” 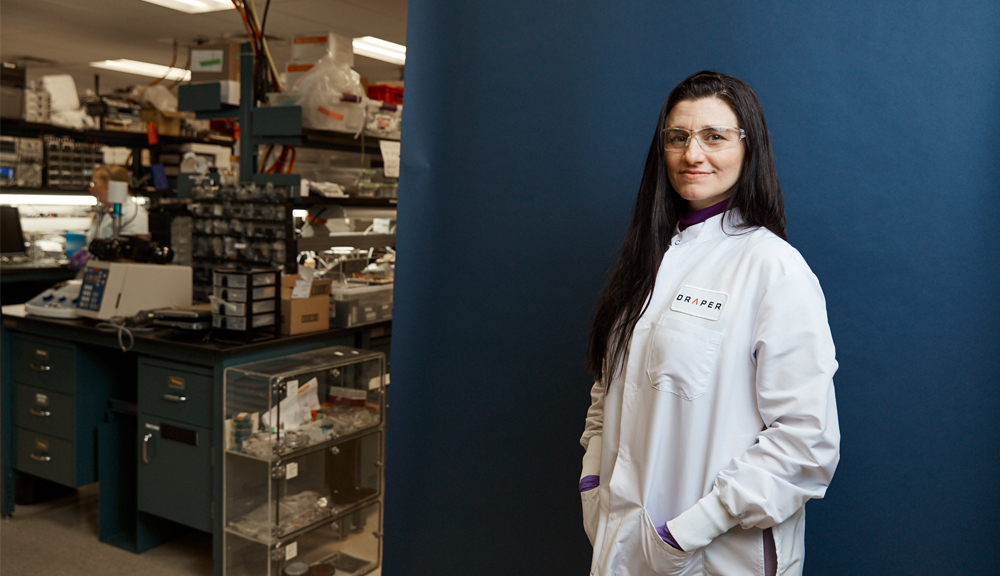 Balestrini in the Precision Medicine and Tissue Systems lab, where she creates microfluidic systems for use in cell therapy. 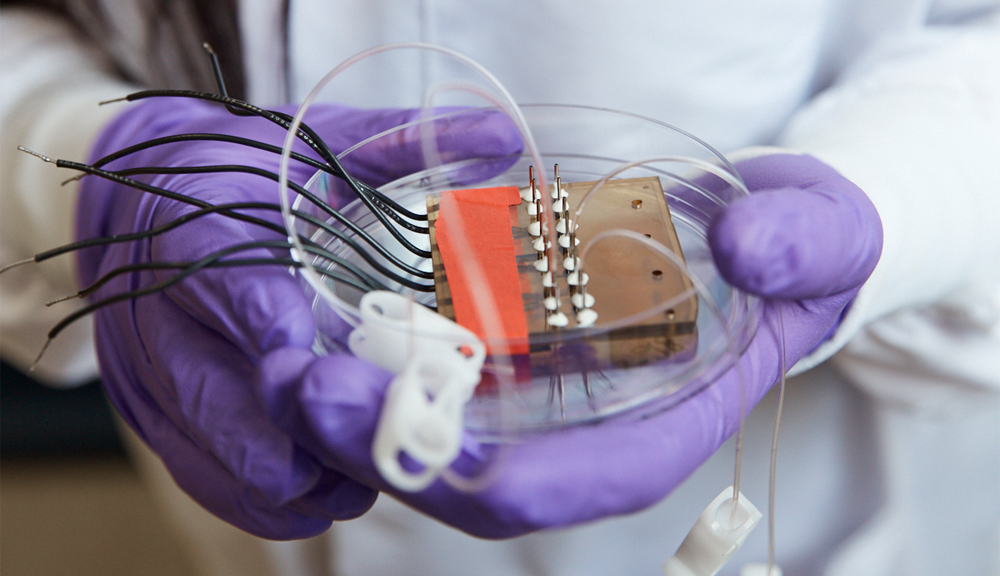 Balestrini's prototype of a microfluidic electroporation device that will transform cells from a patient into a therapy. 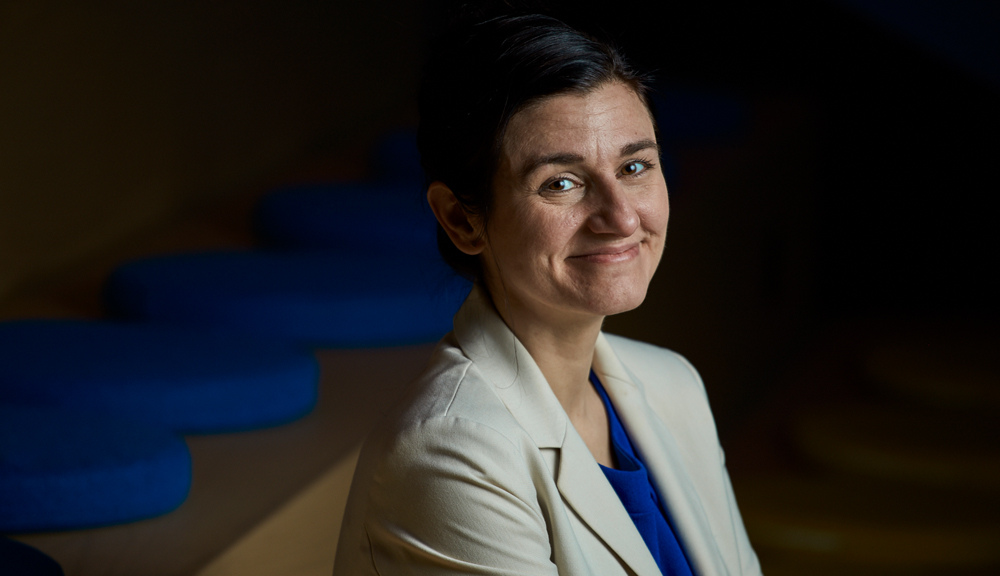 “If we can understand how cells interpret who and where they are, we can use those same signals to manipulate behaviors.”