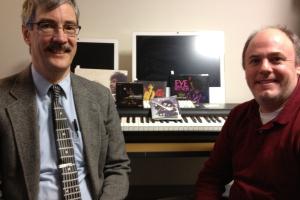 Forty-four years ago this week, guitar great Jimi Hendrix played a legendary concert at the famed Royal Albert Hall in London. Although a poor audience tape of the gig has circulated for years, no stereo soundboard recording existed.

Or so everyone thought.

Joel J. Brattin, professor of literature at Worcester Polytechnic Institute (WPI) and an academic authority on Jimi Hendrix, recently came into possession of just such a recording.

"This is the most important Hendrix concert tape to surface in decades," Brattin wrote in the most recent issue of UniVibes, a magazine dedicated to Hendrix.

Brattin said the tape—87 minutes in length—–showcases Hendrix and his band at their finest. "The sound quality, the guitar playing, Jimi’s vocal performance, and the stereo mix of the Royal Albert Hall soundboard tape are all excellent," he wrote.

Brattin’s discovery attracted the attention of Public Radio International's The World, a long-running co-production of WGBH in Boston, PRI, and the BBC World Service. And earlier this week, Brattin was featured in a nearly eight-minute segment on the program, which airs on more than 300 stations across the United States and Canada.

The tape is historically significant. As the radio piece notes, this concert is one of the last recorded shows Hendrix played with The Experience in Britain. The band broke up in late June 1969 and Hendrix died on Sept. 28, 1970, in London.