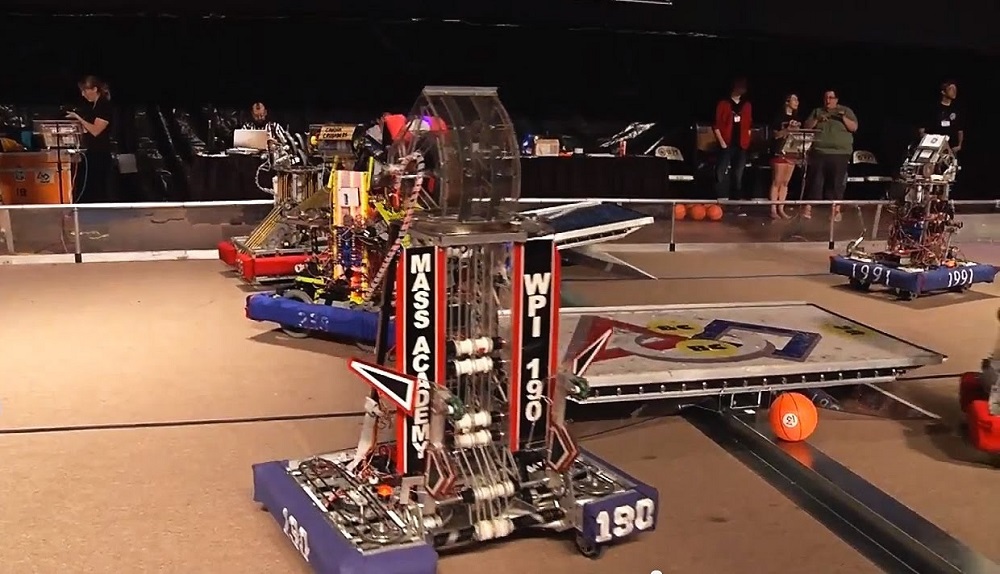 WPI was the first university in the country to offer a bachelor’s degree in robotics engineering, and once enrolled undergraduate and inventor Dean Kamen, founder of For Inspiration and Recognition of Science and Technology, or FIRST.

So it’s no surprise that WPI has a long and cherished history with FIRST—the world’s premier organization for high school robot challenges and other competitions aimed at getting young students excited about science, technology, engineering, and math endeavors.

For more than a decade, WPI has helped write and design the FIRST Robotics software library, an integral element of the control system used by all teams in the annual competition. The software library, called WPILib, includes a wide range of modules that allow teams to easily and quickly develop the programs behind their robot’s control system, such as handle sensors, motors, the driver station, and a number of other components responsible for timing and field management. WPILib used by two-thirds of the more than 84,000 students throughout the world who build robots for the wildly popular FIRST Robotics Competition (FRC).

WPI has been part of FIRST from the beginning. Dean Kamen recruited the university after founding FIRST in 1989. The relationship with FIRST will continue tomorrow (March 8 to 10), as WPI hosts a New England District FIRST Robotics Competition with over 1,000 students from 40 teams throughout all six New England states. (And in May, the campus will also host an off-season faceoff, called Battle Cry, which draws about 1,000 students and has been a fixture on campus for 17 years.)

“It was in 1991 when he came to us,” says Ken Stafford, teaching professor and director of the university’s Robotics Resource Center. “We were one of the first universities he went after. At the time, the school believed it was kind of a cool thing and we stepped lightly into it, but since that time we’ve realized how important it is and we have been one of the longest continuously involved universities—perhaps the longest.”

FIRST not only has brought countless students to STEM pursuits, expanding their horizons, but also has benefitted the university, Stafford says.

Stafford, a retired U.S. Air Force colonel who first came to WPI in 1994 to head the university’s Air Force ROTC program and was hired in 1998 to expand the WPI FIRST effort, says that students throughout the world now know of WPI’s connection to the robotics challenges. Some 14 percent of this year’s incoming freshmen were members of high school FIRST teams, with 13 percent last year and 11 percent two years ago.

“It really has helped the recognition of WPI,” Stafford says. “Right now, through FIRST, there are thousands of kids across the world who recognize WPI. We’re very proud of our work with Dean and FIRST.”

Kamen was an undergraduate at WPI in the early 1970s when he invented the first wearable infusion pump, used in medical specialties such as chemotherapy, neonatology, and endocrinology. He left before graduating to continue his extraordinary career as an inventor with more than 440 patents—including the Segway personal transportation vehicle—and as a tireless advocate for science and technology.

Kamen founded FIRST “to create a world where science and technology are celebrated … where young people dream of becoming science and technology heroes.” The organization hosts a variety of programs for students of all ages and now has 460,000 students participating in 2,600 STEM-related events worldwide. In 2015, WPI president Laurie Leshin was appointed to the FIRST Board of Directors.

“Right now, through FIRST, there are thousands of kids across the world who recognize WPI. We’re very proud of our work with Dean and FIRST.” -Ken Stafford

WPI had a team in the initial FIRST Robotics competition in Manchester, N.H., in 1992 and has sponsored teams ever since. Additionally, the WPI Robotics Resource Center has created a FIRST online resource offering advice on everything from robot chassis to teamwork, and the center brings its robots to some 50 demonstrations a year in libraries and schools through the region, spreading the STEM gospel to elementary school students.

In 1996 WPI established the inaugural FIRST scholarship, one of five now available at the university. It has held regional and district competitions on campus, and WPI students and staff continue to mentor the FIRST team from the Massachusetts Academy of Math and Science to provide assistance to a number of other school teams from as far away as the Dominican Republic.

The FIRST scholarships include two full-tuition, four-year undergraduate awards worth about $190,000 each. One is specifically for design innovation; the other is for demonstrated and promising future leadership by a student who is Native American, African American, Latino American, and/or female. Three $5,000-per-year scholarships also are available as FIRST scholarships for WPI's summer Frontiers program for aspiring scientists and engineers.

Stafford says that the scholarships and the university’s deep involvement in FIRST have brought more top quality students to WPI.

“The quality of kids we get is just astounding,” he says, adding that the school gets hundreds of applicants for the scholarships every year, and in some cases students who don’t get FIRST scholarships wind up coming to WPI and benefitting from other scholarships the university offers.

“This draws talent to the school,” he says. “It feels great, and besides that, we are getting top students, and that makes the university stronger.”

FIRST also sponsors programs for younger students, and in 2000 WPI became the Massachusetts operations partner for FIRST LEGO League, in which 9- to 14-year-old students use LEGO Mindstorm sets to build palm-sized robots.

Colleen Shaver, an associate director of the university’s Robotics Resource Center, oversees the FIRST LEGO program in Massachusetts, one of the largest. She registers 460 teams with approximately 2,500 students, and organizes 13 competitions and two championships, including one competition and one championship hosted on campus. She points out that it’s important to get middle school students on the path to possible STEM careers. In addition to building robots, the students complete a project around a specific theme, talking with scientists, engineers, and other professionals in the process.

“The goal is to introduce them to careers in science and technology and to give them role models and goals they can work toward,” says Shaver. “We’ve seen them at 10 years out. They came here as nine-year-olds and if affected them, and they stayed connected to WPI.”

Brad Miller, an associate director of the Robotics Resource Center, who has developed WPILib  programs used to make FIRST robots go, sees FIRST as “a great STEM outreach program to get students to appreciate and pursue careers in STEM fields.”

“It exposes them to stuff that they would never otherwise get through their high school career,” he says.

Shaver says the FIRST programs get young students involved in science and engineering pursuits at an early age.

“We’ve seen them at 10 years out,” she says. “They came here as a 9-year-olds and it affected them and they stayed connected to WPI.”

Stafford, Miller, and Shaver all believe the benefits also flow to people who help make FIRST a success. The organization reports that 230,000 mentors, coaches, judges, and volunteers are involved in 85 countries.

Stafford says he enjoys working with young robot builders as they race to the competition. During the intense six-week lead up to the faceoff, teams meet at his house once a week to work on their projects . Some of the friendships he has forged through the program stretch back 19 years.

“I’m a geek and I like building robots but it’s not just about building robots. It’s about the kids and the team, seeing light bulbs come on and seeing kids mature and learn how to get things done as a group.”

Miller agrees. “It’s really good to be able to see all these students participate in these competitions with these amazing robots they made in a such a short period of time,” he says. “To walk around and see this stuff, you can’t help but feel we’re doing a lot of good and really helping a lot of students.”

Shaver also finds that watching students develop problem-solving skills in building their robots to meet FIRST challenges is gratifying. And she has a special reason to feel good about the effort.

“I was a student on a FIRST team in high school and it was a very valuable experience,” she says. “It’s an opportunity to give back.”

Student participants and their teacher mentors had just six weeks to design and build a robot to compete in this challenge; on March 8-10, they'll take over Harrington Auditorium. May the best robot win! Learn more.