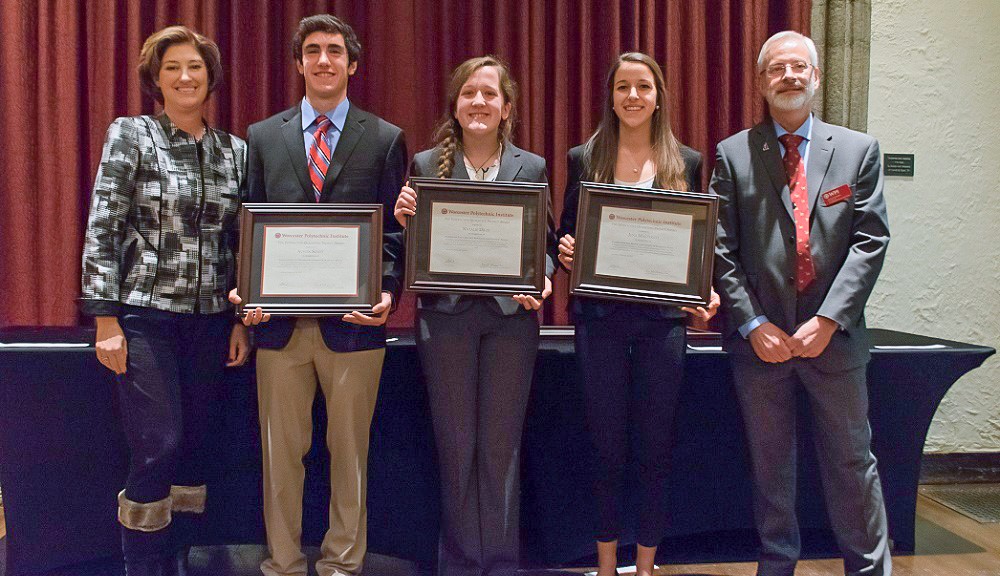 An IQP team that investigated the complex issues relating to the management of a New Zealand lake was honored with the top place in the annual President’s IQP Awards on Feb. 10. After the five finalists made their presentations, the judges conferred before the results were announced at Higgins House. More than 60 projects were submitted for the award.

The project aided the Greater Wellington Regional Council (GWRC) in collecting opinions from five stakeholder groups concerning management of the naturally flooding Lake Wairarapa. The team conducted a total of 29 interviews with the Rangitāne (Māori) Department of Conservation, South Wairarapa District Council, landowners, and recreational water users regarding barrage gates that play a vital role in flood management. Interviews with stakeholders indicated that water quality, sources of pollution, water levels, flood management, and future operation of the barrage gates are controversial. The team identified communication, collaboration, and education as three areas of focus for the GWRC as it continues to improve management of the region.

In naming the New Zealand team to first place, President Laurie Leshin commended the students for “dealing with a culturally challenging issue in a way that showed incredible maturity. And we thought the quality of their presentation was exceptional.”

Leshin told the gathering at Higgins House that judges had a difficult time selecting a top team. “It was a great day,” she said. “It was an honor to spend this time looking at your work. The judges were impressed at the level of engagement, the hard work you all engaged in, and the passion these amazing teams displayed. Each project is as different as the teams themselves, and they’re all quite compelling.”

First runner up was Improving Healthcare Coordination in the Mandi District, which looked at rural healthcare workers in the Mandi District of India, who face unique challenges in providing quality care due to mountainous terrain and lack of supplies. The project evaluated the existing system of communication among health centers and identified areas in which the system could be improved to mitigate the effects posed by the challenges. The team recommended a new system for medical stock requests and deliveries that could shorten delays by up to 15 days, and ultimately improve the quality of care for patients.

“It was especially impressive that this team prototyped a tech solution to a real social challenge in the healthcare system,” Leshin said of the India team.

The other three finalists also garnered praise from Leshin and the judges.

Preventing Violence Against Women: Training Resources to Empower the Broadmeadows Community examined the underlying causes of violence against women in a community in an area of Melbourne, Australia, and developed an educational program on gender equality and respectful relations, and a training program on violence against women and bystander action for students. The project team members are Megan Belval, Naumilda Como, Cameron Jones, and Conrad M. Ruiz. Faculty advisors are Holly Keyes Ault and James Hanlan.

“The cultural sensitivity around a challenging issue was incredibly important,” Leshin said. “The work this team did clearly had an impact on them. Longer term, their work will also have a positive impact on the trajectory of that community as well.”

Evaluating the Need for a Consumer Focused Smoke Alarm Performance System saw the team work in coordination with the Consumer Product Safety Commission (CPSC) to determine if a performance-based rating system for smoke alarms would be beneficial to consumers in order to get better performing and safer smoke alarms into their homes. The team made recommendations to the CPSC on how to continue studying consumers and smoke alarms, and to look into a performance-based rating system and a features list.

“These projects are local projects that have an impact where they take place,” Leshin said. “In and of itself, that is impressive. However, this project impressed us because it has the potential to have national impact. The team did a fantastic job.”

“It was an honor to spend this time looking at your work. The judges were impressed at the level of engagement...and the passion these amazing teams displayed.” -Laurie Leshin

Examining the Development of Nature-Urban Routes in San José, Costa Rica assisted Rutas Naturbanas, a non-profit foundation, in finding solutions for sewage contamination of rivers and insufficient transportation infrastructure in the city. The team surveyed members of the public, interviewed professionals and activists, and reviewed research in relevant fields; it found that to ensure the most positive impacts, the routes should link residents and local organizations through engagement initiatives while balancing public safety with environmental protection.

“This is a project that has the potential to be transformative for the city,” Leshin said. “This was also really the best-written report,” Leshin said. “It was really a pleasure to read.”

Receiving an honorable mention was Alternative Water Treatment: Designing a Floating Island that Integrates Social & Technical Elements at American Farm School in Thessaloniki, Greece. The project provides recommendations to the American Farm School for a multipurpose floating island that works in conjunction with its water recycling system to conserve freshwater for irrigation. This was accomplished through discussions, interviews, workshops, literature review, and archival research. The final design is a natural water treatment system that serves to educate the campus.