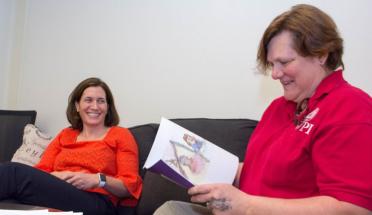 Everything started with a few drawings on the lunchroom whiteboard. As Janice Frederick spent her break time on her 3 to 11 p.m. custodial shift to add some funny drawings and stories to the blank slate, her coworkers took notice. Amused by the exuberant drawings and the sly humor, they anticipated the drawings even as they tried to identify the artist.

No one ever imagined the off-the-cuff drawings would launch Frederick as a children’s book author and creator of a series that began with The Lady Who Eats Roofing Nails, spark a mentorship between Frederick and Foisie Business School professor Bengisu Tulu (pictured above), and even provide direct work for Tulu’s students. 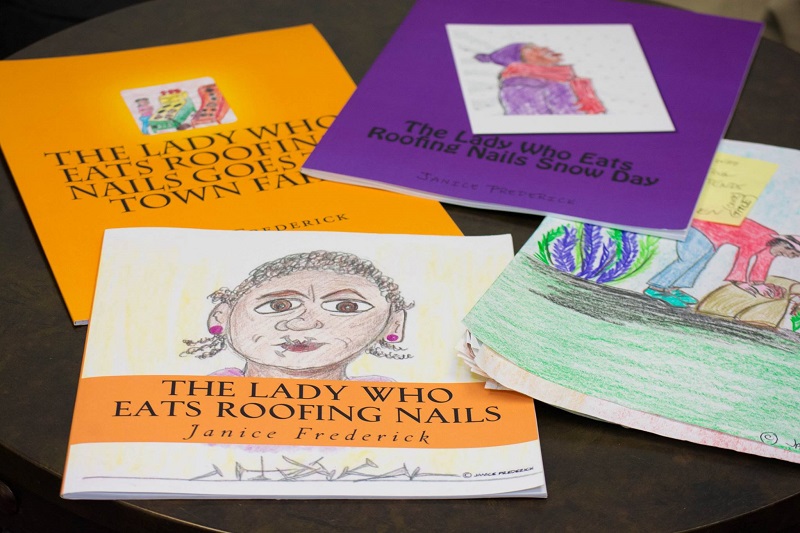 A selection of Frederick's books.

“Every month or so I would try to do something different,” says Frederick. And while a few people knew Frederick was the artist of the endearing and sometimes searingly funny drawings, many didn’t and just enjoyed seeing something new.

Tulu found herself drawn to the board and wanted to know what else the artist was doing to keep that art and storytelling alive. “It always had some humor and there was always a story behind it,” she says. “And she was talented.”

Word spread, and then requests began coming in for “Janice’s board.” Tulu encouraged Frederick all along, gently prodding her to consider her potential. Eventually, Tulu threw down the proverbial gauntlet—she gave Frederick two things for her birthday: markers and a challenge.

Frederick recalls that break was coming up and so with Tulu’s challenge fresh in her mind, she sat at her kitchen table and thought about what kind of book would work. Soon, she was producing page after page. “I work very well under pressure and stress,” she says.

The visual inspiration for the book is based on a friend, but Frederick’s own life experiences really formed the books’ fundamental message. “I want people to learn to not judge anyone by appearances,” says Frederick. As a woman who has long held roles in occupations traditionally dominated by men—like carpentry or landscaping—Frederick has endured her share of comments that are both insensitive and hurtful and generally blanketed in a joking manner.

“I’ve been called the lady who eats roofing nails,” she says. “I’ve been told, ‘Oh, you can take it—you’re a big girl.’” So writing a positive book about a strong, independent woman who may look tough on the outside but is a softie on the inside was fitting and familiar. “This book got all that out in a positive sense; it was very freeing,” she says.

As a self-taught artist and illustrator, Frederick draws without an eraser, preferring to say there are no mistakes. “You make it into something else,” she says. Her storytelling is multilayered, she says, but she always has a concept visualized before she begins to draw anything. “All my life, I have had a story underlying another story,” she says. “I have a Ferris wheel in my head.”

After that first productive break, Frederick brought her work to Tulu to see what she thought. The complete, fully illustrated book with a story line and plot took Tulu by surprise. “I said, ‘We have to figure out how to turn this into a book,’” she says. “I told her, ‘Maybe you can self-publish with Amazon.’”

When Tulu asked what other work she could produce, Frederick returned to the kitchen table and churned out five more books in January and February. She produced a series in short order. While Tulu provided the nudge to get a story in motion, Frederick’s wife, Delilah Dugo, who works as a graphic artist, helped with the publishing aspects of working through Amazon to sell the books.

For Frederick, the efforts were nothing short of cathartic. She has always been creative, building everything from a papier mâché goat to a gazebo to a Native American drum (which won the “Most Creative” award in a WPI art show).

“All my life, I have had a story underlying another story. I have a Ferris wheel in my head.” -Janice Frederick

“When I was a kid I was going to do a book about bugs not doing drugs,” Fredrick says, but noted she lacked the confidence to take her dreams past the idea and sketching stage. With The Lady Who Eats Roofing Nails series, Frederick earned a status as a published author—and something intangible. “This made me believe in myself and made me have confidence,” she says. High school friends, who once were recipients of Frederick’s teenage artistic streak when she would make comic books for them, are thrilled for her and tease her about not forgetting them when she makes it big.

Frederick’s work and her production speed were an excellent example for Tulu’s students. “It’s fun, in general, to see how much she produces,” says Tulu. “She was cranking out books in a matter of days.” Even Tulu’s 9-year-old daughter, Evin Otero, caught onto her mom’s enthusiasm—now she wants to learn how to draw.

Presenting Frederick’s next steps as a business and technology problem for her students to work on, three of 12 groups in Tulu’s class chose to work on Frederick’s challenge of promoting yourself as a self-published author. “They had a lot of questions,” Tulu says. “These are business students and they wanted to know where the money will come from. They were skeptical with one book, but then Janice came up with five more. It was an eye-opener for them to see how she had an idea to do creative work within a creative space and she came up with a lot of products very quickly.”

The groups produced three different websites for Frederick, giving the students an authentic problem to solve while also inspiring some competition among the students. The student-created website Frederick chose was designed by Akanksha Bhatia, Shalini Tallam Laxman, Priya Shrivastava, and Nikita Londhe. Frederick also promotes her books on a Facebook page.

The WPI connections have been a constant for Frederick, who has worked at WPI for 17 years, starting out in the mailroom. “I am more of a 7-year person for working in one place,” she says, noting her own surprise at how long she has been at WPI. “But things here change all the time. There are so many new faces and so many changes.” And the connections remain. “There are kids from the Class of 2000 who still find me when they come back to campus,” she says.

Energized by the stunning results, Frederick has plans for a book with a little more adult humor the next time around. She already has the vision in her head.