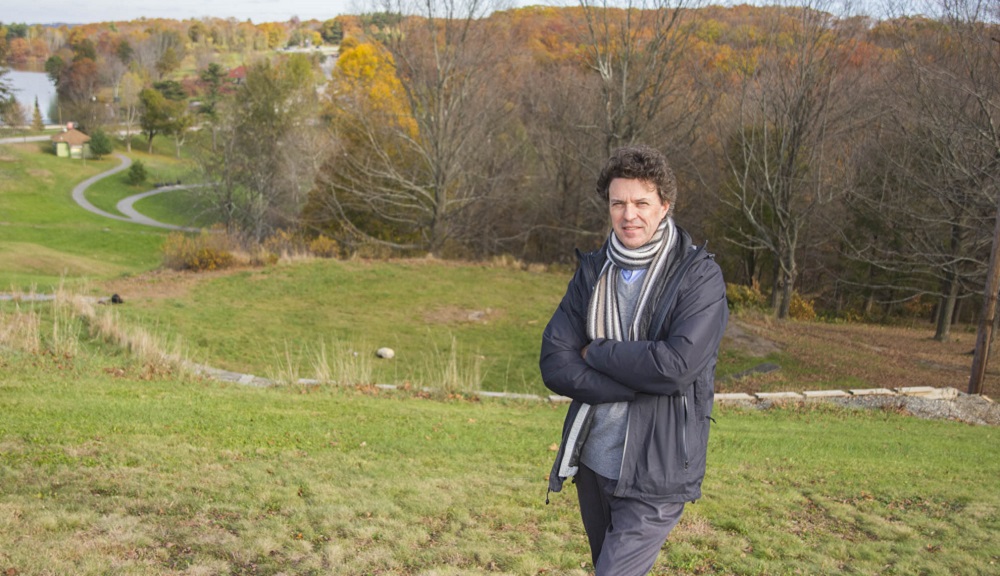 Next year will mark the 100th anniversary of the end of World War I, one of the largest, deadliest wars in history. On campus, a plaque outside Boynton Hall currently commemorates the more than 700 men with ties to WPI who fought in World War I, and includes a list of the 15 who lost their lives doing so. Countless gestures of respect and remembrance will surely come forward—and for one WPI professor, his contribution is over a year in the making.

Director of the Architectural Engineering program and professor of civil and environmental engineering Steven Van Dessel has been working with the City of Worcester to design a new World War I memorial in Worcester’s Green Hill Park. The plan for the new memorial is that it will build upon and complement the already existing Memorial Grove, which was dedicated in 1928.

The project came to Van Dessel’s attention shortly after he and his students completed work on the design of a greenhouse for Worcester Technical High School (WTHS), which is adjacent to the park. Once the conceptual idea for the new memorial had been approved by the park commission, he set to work on the development of the design. He also hired architectural engineering student Nate Rogers ’19 to assist with the drafting and design development tasks of the project last summer and this fall semester. Jessica Rosewitz, a PhD student in civil engineering, also volunteered her time to help with structural design calculations for the project.

The memorial is planned to be built in the spring and summer of 2018, giving ample time for it to be ready for the centennial anniversary. When completed, Van Dessel aims for the memorial to be an immersive, contemplative experience. “We didn’t opt for the regular honor roll style,” he explains, referring to how many memorials feature emblazoned names of every soldier or victim on a single work.

Instead, the Green Hill Park memorial will be made up of hundreds of poles, one for each fallen soldier from Worcester. Constructed with corten steel, the poles will have a silver finish, but over time will become reddish-brown in color. When put together and viewed from above, the memorial takes the shape of a poppy, which Canadian Lieutenant Colonel John McCrae’s legendary poem “In Flanders Fields” highlights as one of the only plants to grow around soldiers’ graves in the barren battlefields.

“The project allows me to serve our community as a faculty member. I’m happy to do it. It’s the right thing to do.” -Steven Van Dessel

Collectively, the poles embrace the site and visitors will have the chance to walk through the memorial and reflect on those who made the ultimate sacrifice during the war. The poles will be spaced out so that visitors can see through to the original Memorial Grove nearby, which consisted of one tree and plaque honoring every fallen Worcester soldier.

Over time, much of Memorial Grove has fallen into disarray, with many of the original trees gone, and every plaque missing. As part of the project and led by the efforts of Brian McCarthy (President, Green Hill Park Coalition) and Robert Antonelli (Assistant Commissioner, City of Worcester), all the missing trees will be replaced with the help of community volunteers.

“Memorial Grove was one of the first 50 to be recognized,” Van Dessel says, adding that being included in the program is an honor. Memorial Grove joins a World War I monument in Harvard as one of two memorials in Massachusetts that were selected. As part of the award, the city will receive a $2,000 grant to be used toward restoration and maintenance of the memorial.

One of the most impressive things about the undertaking is that Van Dessel has been working on the project without any compensation. Originally from Flanders in Belgium, Van Dessel explains that he was honored for the opportunity to contribute to this project as many of the war’s casualties occurred in Flanders.

“The project allows me to serve our community as a faculty member,” he says, a sentiment that’s common among faculty at WPI. “I’m happy to do it. It’s the right thing to do.”