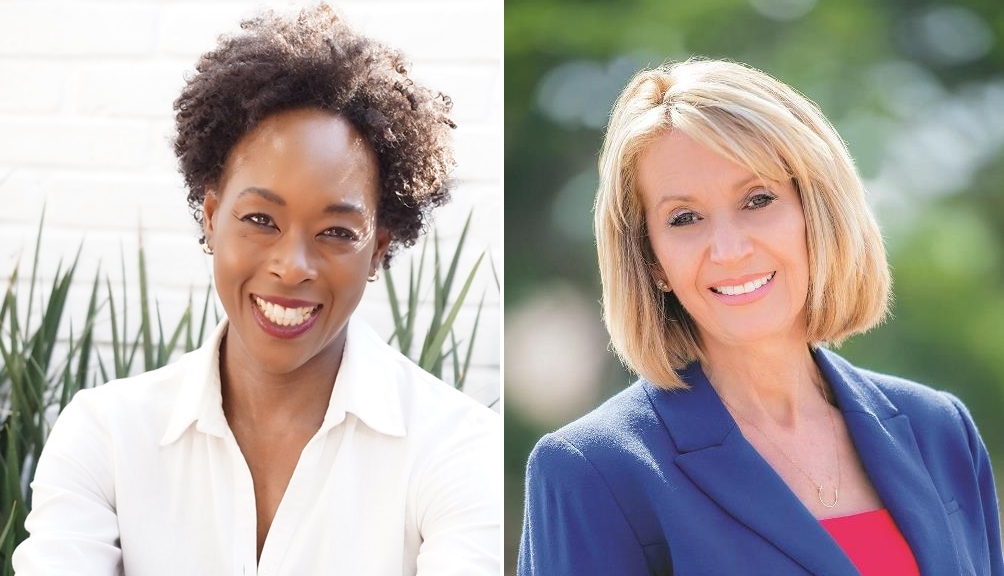 Margot Lee Shetterly, left, is the author of “Hidden Figures: The American Dream and the Untold Story of the Black Women Mathematicians Who Helped Win the Space Race”; Marcia McNutt is president of the National Academy of Sciences

Worcester Polytechnic Institute (WPI) today announced its honored speakers for the 2018 Commencement ceremonies to be held in May. Since 2016, the university has held two distinct exercises to celebrate the accomplishments of its undergraduate and graduate students.

Margot Lee Shetterly, author of Hidden Figures: The American Dream and the Untold Story of the Black Women Mathematicians Who Helped Win the Space Race (William Morrow/Harper Collins 2016), will deliver the undergraduate commencement address on Saturday, May 12. Hidden Figures, which was made into a major motion picture, sheds light on the untold history of the African American female mathematicians who were part of NASA’s work force from the 1940s to the 1960s. Shetterly, who is also the founder of The Human Computer Project, will receive an honorary doctor of humane letters degree.

Marcia McNutt, president of the National Academy of Sciences, will deliver the graduate commencement address on Thursday, May 10. The NAS is a private, nonprofit institution established under a congressional charter signed by President Abraham Lincoln in 1863. It recognizes achievement in science by election to membership, and—with the National Academy of Engineering and the National Academy of Medicine—provides science, technology, and health policy advice to the federal government and other organizations. McNutt will receive an honorary doctor of science degree.

“One of my greatest pleasures is welcoming commencement speakers who can excite and inspire our students,” said WPI President Laurie Leshin. “Both Margot Lee Shetterly and Marcia McNutt are influential and engaging figures in STEM who have made a significant impact in their respective fields. They have used their roles to elevate the importance of STEM and to encourage young people, especially young women, to pursue their passion. I also take great pride in presenting our outstanding graduates to such esteemed visitors to our campus.”

Shetterly grew up in Hampton, Va., in a neighborhood of scientists that included the women featured in Hidden Figures. It was not until adulthood and multiple career switches—from investment banking to media, and then to founding a newspaper in Mexico with her husband—that she learned what the women actually did for NASA and the impact their work had. She began the research for Hidden Figures in 2010, and eventually sold the films rights in 2014; the film was released in December 2016. Her book also received the Anisfield-Wolf Book Award for nonfiction in 2017, an award that recognizes books that have made important contributions to our understanding of racism and human diversity. A children’s book of Hidden Figures, co-written by Shetterly, will be released in 2018, and will be geared towards girls ages four to eight.

She is also the founder of The Human Computer Project, an endeavor that is recovering the names and accomplishments of all of the women who worked as computers, mathematicians, scientists, and engineers at the National Advisory Committee for Aeronautics (NACA) and NASA from the 1930s to the 1980s. Aside from helping these women tell their stories, The Human Computer Project aims to help new generations of women and minorities to pursue careers in STEM fields.

Shetterly graduated from the University of Virginia’s McIntire School of Commerce, and began her career working on the trading floor of J.P. Morgan, and later, Merrill Lynch. From there she moved into consulting for several media startups when digital media began emerging; after marrying her husband, she moved to Mexico and launched an English-language magazine called Inside Mexico. After the magazine folded, Shetterly and her husband worked as content marketing and editorial consultants, until she began the research for Hidden Figures.

McNutt is a geophysicist and president of the National Academy of Sciences. From 2013 to 2016 she served as editor-in-chief of the journal Science. Prior to that she was director of the U.S. Geological Survey (USGS) from 2009 to 2013. During her tenure, the USGS responded to a number of major disasters, including earthquakes in Haiti, Chile, and Japan, and the Deepwater Horizon oil spill. McNutt led a team of government scientists and engineers at BP headquarters in Houston who helped contain the oil and cap the well. She directed the Flow Rate Technical Group that estimated the rate of oil discharge during the spill’s active phase. For her contributions, she was awarded the U.S. Coast Guard’s Meritorious Service Medal.

Before joining the USGS, McNutt served as president and chief executive officer of the Monterey Bay Aquarium Research Institute (MBARI), in Moss Landing, Calif. During her time at MBARI, the institution became a leader in developing biological and chemical sensors for remote ocean deployment, installed the first deep-sea cabled observatory in U.S. waters, and advanced the integration of artificial intelligence into autonomous underwater vehicles for complex undersea missions.

From 2000 to 2002, McNutt served as president of the American Geophysical Union (AGU). She was chair of the Board of Governors for Joint Oceanographic Institutions, responsible for operating the International Ocean Discovery Program’s vessel JOIDES Resolution and associated research programs.

She began her academic career at the Massachusetts Institute of Technology (MIT), where she was the E.A. Griswold Professor of Geophysics and directed the Joint Program in Oceanography/Applied Ocean Science & Engineering, jointly offered by MIT and the Woods Hole Oceanographic Institution. Her research area is the dynamics of the upper mantle and lithosphere on geologic time scales, work that has taken her to distant continents and oceans for field observations. She is a veteran of more than a dozen deep-sea expeditions, on most of which she was chief or co-chief scientist.

McNutt received a B.A. in physics from Colorado College and a Ph.D. in Earth sciences at the Scripps Institution of Oceanography. She holds honorary doctoral degrees from Colorado College, University of Minnesota, Monmouth University, Colorado School of Mines, University of Miami, and Uppsala University. She is a member of the American Philosophical Society and the American Academy of Arts and Sciences, and a Foreign Member of the Royal Society, UK and the Russian Academy of Sciences. She is a fellow of AGU, the Geological Society of America, the American Association for the Advancement of Science, and the International Association of Geodesy. In 1988 she was awarded AGU’s Macelwane Medal for research accomplishments by a young scientist, and she received the Maurice Ewing Medal in 2007 for her contributions to deep-sea exploration.

Honorary doctors of engineering will also be awarded to WPI trustee emeritus Philip B. Ryan ’65, former Board of Trustees chair, and interim president and Glenn Yee ’74, trustee emeritus and founder of Pacific Can Company.

“Both Phil Ryan and Glenn Yee have been passionate and committed stewards of WPI for decades,” said Leshin. “Their dedication to WPI through alumni activities, industry events, and scholarship programs is remarkable and make them truly deserving of this honor.”