Tales of the Lost Formicans

Mechanical engineering student Ryan Herrmann ’19 of Nashville, Tenn., is the producer of Tales of the Lost Formicans, which runs today through Saturday, Nov. 17–19, at 7 p.m., at the Little Theatre. Directed by Alicia Weber '17, the play is presented by Masque and the Department of Humanities and Arts.

Herrmann calls the play a comedic drama; he says theatre-goers can expect entertainment and insight on multiple levels from this play by Constance Congdon.

“There’s a lot going on with this one,” he says. Dealing with issues around Alzheimer’s disease, family, and aliens—that’s right, aliens from outer space—the plot focuses on a family and its struggles, and promises to have broad appeal. 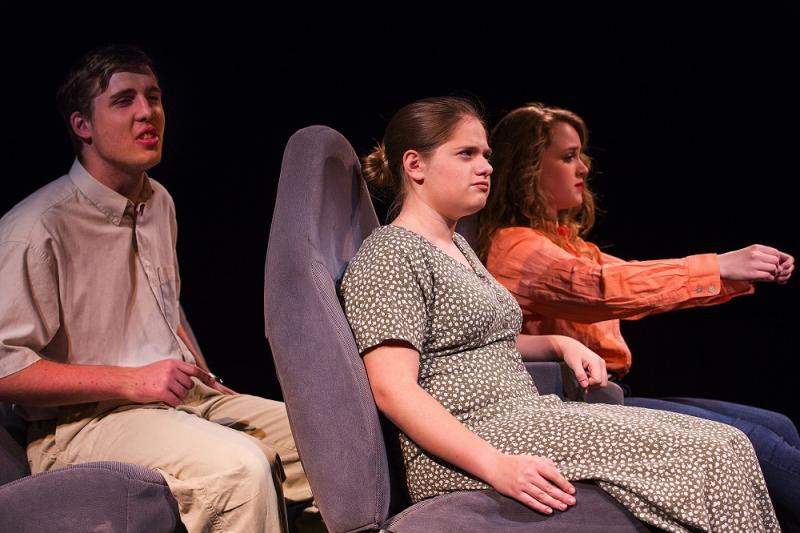 Cast members rehearse a scene from the play.

“It really does resonate with people of all ages,” says Herrmann. “Cast members deal with a grandfather with Alzheimer’s and the effects spanning three generations.”

“Congdon's aliens are a fluidly shifting metaphor for her own complex relation to the subject of her drama, a lower-middle suburban family coping with three generations' worth of stress simultaneously,” writes Michael Feingold of the Village Voice.

Masque puts on four shows a year, and has about 30 active members, according to Herrmann. Susan Vick, professor of drama/theatre and director of theatre, is the group’s advisor. She maintains the academic side of the program for students who are participating to earn academic credit, among other responsibilities.

Herrmann says that at WPI, students who participate in theatre are doing different kinds of studies in the classrooms and labs, but coming together for the stage. He calls it a very different show than those he’s worked on in the past. And the way the group is structured allows for this kind of variety of productions.

The fully student-run show in A-Term was The Taming of the Shrew, he says. For B-Term, the play is chosen by the advisor, sometimes with the director having input. For C-Term, Masque members vote in a president, who decides on the show. And D-Term offers the New Voices play festival (the longest-running collegiate original event of its kind). Masque has done classical, modern, drama, and comedies in the past, so participants and production attendees can be assured that they are always getting something new.

Tickets to Tales of the Lost Formicans are free for WPI students, and donations are gratefully accepted. The show is open to the Worcester community, and tickets ($5) can be reserved online through the electronic reservation system.