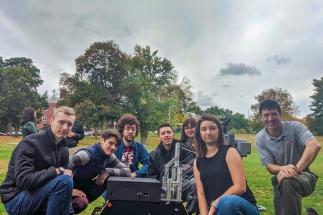 A team of student researchers working on their Major Qualifying Project (MQP) was getting ready to take their robot to the ocean where they could test its ability to not only move underwater, but to also navigate autonomously, recognize a particular kind of fish and capture it. It’s a project that could have a great environmental impact.

But then in early spring the coronavirus outbreak turned into a pandemic and the students were sent home in an effort to keep them safe. The underwater robot was too big to make the trip home with any of them, so work on the hardware was brought to an abrupt stop. The team wouldn’t make that trip to test their project in the ocean.

Meanwhile another MQP team was focused this year on creating a robotic system to detect and destroy landmines. This year’s de-mining team is the fourth to work on the dual-function robotic system, and they have been working to make the two main pieces work together, and then begin testing the entire system. They too had to pivot, and learn an entirely new and valuable lesson, when campus closed.

A graduation requirement for every WPI student, MQPs are team-based design or research projects that give students professional-level experience. Some MQP projects are wrapped up in one academic year, while others, like the lionfish and the landmine projects, are multi-year efforts. Handing off projects isn’t entirely uncommon; many MQPs require a series of teams to iterate on each others’ work over several years. The disappointment and learning opportunity for these two teams lies in not meeting their goals but then refocusing on the bigger project picture.

This is WPI, so learning how to be agile in real-world situations is part of what students learn here. So, when one team’s research journey comes to an end, another team is there to take their baton and move the project forward. And with WPI’s focus on project-based learning, unexpected roadblocks become real-world lessons. Such obstacles teach students how to recover from a setback, how to change plans on the fly, and how to take on an expanded sense of team work by pivoting to enable another team to finish the job.

These two robotics projects aren’t ending. They’re going to be picked up and carried on.

Here is how two MQPs pivoted in the midst of a pandemic to not only keep their projects alive but to help the next teams of researchers coming up behind them to carry on. 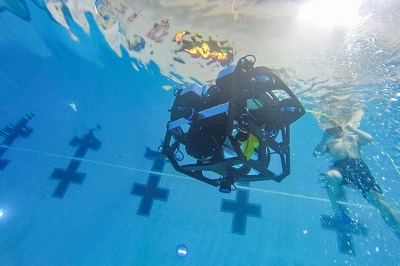 When the pandemic hit, every WPI student who was working on their MQP needed to figure out how to continue their project while moving off campus. This was especially challenging for the lionfish harvesting robot team because they have been working on a large robotic system that couldn’t fit into a car and be brought home to continue work in a garage or basement.

“We were so close,” said Clark Ewen, an electrical and computer engineering major, who has been working on his MQP to develop a robot that will autonomously hunt for and harvest lionfish. “We were disappointed. But it’s important to be flexible and be open to pivot in different ways. It’s about figuring out a way to make a project succeed. WPI has trained us to do that. We can look at this and see it’s the coolest part of what WPI does.”

For the lionfish project, this was the third MQP team to take on the research, which is focused on designing an autonomous robot that will work underwater to hunt for and harvest lionfish. The species, native to the South Pacific and Indian oceans, have become a serious problem in the Caribbean and western Atlantic where they are an invasive species, threatening other fish species, coral reefs and commercial fishing industries. The WPI project goal is to reduce the impact of this invasive species on marine ecosystems from the Caribbean up to the coasts of Florida and Georgia.

The lionfish hunting robot is being built with machine learning, advanced computer vision libraries, and neural network software to enable it to navigate underwater and identify a lionfish from all the other fish species. The system also is being designed to spear the fish and draw it into a container on the back of the robot where it will be held for the fisherman waiting in a boat on the surface.

The team said they needed just a few more days of testing in the WPI pool to be able to move on to testing the robot in a lake or the ocean. “If we’d had D-Term to work on it, we could have hit our project goals,” said Ewen.

With no way to hit all of their original goals this year, the students took a moment to be disappointed, and then moved on to create the documentation and guidance that would be needed to help the next team successfully take over and hopefully complete the project.

“This is what we prepare our students for,” said Craig Putnam, senior instructor of computer science at WPI, and an advisor for both the lionfish and landmine teams. “We are all about project-based learning, so hitting roadblocks and finding a way around them is part of what happens in the real world. We can be disappointed but at the same time see this as a learning opportunity and let it help prepare the students for the future work environment. If we have to be paused, let’s still be useful.”

Michael Abadjiev, a double major in robotics engineering and mechanical engineering, was working on the mechanical design for the robot’s harvesting mechanism. He said they were excited about the progress they were making in C-Term and he was looking forward to diving with the robot.

“Not getting to go through with the rest of the testing was hard,” said Abadjiev, who is a scuba diver. “But this is why I came to WPI. Having the experience and the opportunity, especially in robotics engineering, to work with the concepts you talk about in class is invaluable and gives you a unique perspective on how things work. And this is giving us experience in what to do when you hit a speed bump. You work to help someone else finish the job.”

The landmine MQP team also had a particular problem with their project when it came time to leave campus for D-Term.

They have been working with a system that includes an autonomous rover to detect and mark the location of the landmines and a drone that can drop payloads onto the mines to safely detonate them. With large robots like that, there was no way to get them home to continue working on the hardware, and that inhibited how much they could continue to work on the software, as well.

“Since we started working from home, the biggest thing we’ve done is create a user guide,” said Jess McKenna, a robotics engineering major and a member of the de-mining MQP team. “It’s written for someone coming onto the project for the first time. We wanted to think of any questions they might have and put the answers down all in one place. Helping that next team – I think it’s one of the biggest things we’re excited about now.”

Landmines planted during wartime across fields and backyards and around critical water sources, kill or maim between 15,000 and 20,000 people worldwide each year—one in five of them children—according to UNICEF. Local citizens, unable to afford massive mine detonating machines, use ineffective and dangerous methods to try to detect the mines.

Under Putnam’s guidance, a series of student teams over the past four years have worked on the system that could be user friendly enough for lay people to use and inexpensive enough for a small community to purchase.

Past teams, using computer vision, a GPS system and machine learning, had individually developed the rover and the drone. This year’s team was focused on making them work together, and begin testing the system as a whole. They were able to put together individual components and sensors, but they did not have enough time to get the drone and rover working together. Now that work will be taken on by the next MQP team.

Putnam already has been talking with juniors about taking on both the lionfish and landmine projects as their MQPs next year.

“I’m excited, given that we couldn’t finish it, that another team can move it forward and that we can help them,” said Andrew VanOsten, a robotics engineering student on the team. “If we can’t make the goals we initially were shooting for, we can find new goals that are still attainable.”

“It’s a testament to the students and the way we teach them that they can adapt like this,” said Brad Miller, associate director of WPI’s Robotics Resource Center. “You can define success in different ways. If students walk away demonstrating flexibility and learning from this, that’s a success. Maybe not the success we were originally looking for but still a very successful outcome for these students.”

Hear from the students and faculty about their projects.