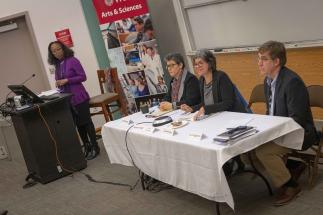 On Wednesday, Feb. 5, faculty members from a range of disciplines engaged students in a discussion on the impact of climate change, what it looks like in different parts of the world, and what people and institutions—including WPI—are doing about it.

The panel discussion, “Climate: The Science of Change,” was part of the ongoing “Critical Conversations” series established in 2018 at WPI by Jean King, Peterson Family Dean of Arts & Sciences.

In discussing the problems of extreme weather conditions, rising oceans, melting glaciers, and wildfire-ravaged Australia, panelists explored questions of how long Earth will survive and if it is possible to have global environmental sustainability. 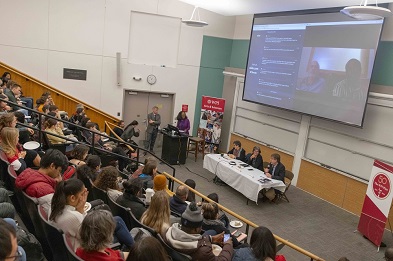 Associate professor of civil and environmental engineering and director of sustainability Paul Mathisen and assistant teaching professor of interdisciplinary studies and co-director of Global Lab in the Foisie Innovation Studio, Stephen McCauley also answered questions from students at the conclusion of the panel discussion.

The panel explained how human activities sped up the negative consequences of climate change, and how today’s younger generations are becoming a force for preserving the world, with emphasis on how people can adapt to and use technology such as renewable energy, to take better care of themselves and the environment.

Strauss emphasized that while the problems of climate change aren't new, there are some solutions available … personal choices can have an impact.

Students can have an impact on how culture shifts to adapt to it, Strauss explained. She challenged them to hold conversations with those in their lives on what is happening now with climate change, on the tools that are available to address it—and she urged them to get out and vote.

“Climate change is a cultural problem,” Strauss said. “The things we do, the choices we make about resources and developing ideas, is our culture and how we adapt to change. It is here now—it is not a future problem. The technology we have to address is also here now. Make the changes.”

She encouraged them to attend the second Climate Summit at WPI to be held April 17.

Strauss also touched on a “sea change” at universities across the country and other “big-invested entities” that are divesting from fossil fuel companies that pose risks for both investors and the planet. The topic triggered numerous questions from students about how WPI is investing its money.

“Previously, fossil fuels were the best investment of money," she said, "but this year, we’re starting to see major entities, like the University of California, divesting.”

While fielding students’ questions, Mathisen explained that WPI has a broad investment portfolio and ensures that funds support initiatives addressing these issues, including climate change.

“We really want to encourage discussions," he said, "and we’re developing a sustainability plan.”

He added that WPI is also proactively looking at the amount of traveling faculty and students are doing—with air travel a high greenhouse gas emitter—and developing ideas on how to address it as an institution, including alternative transportation.

Mathisen said WPI has adopted new initiatives—some student-led—over the past several years, such as improving energy efficiencies in campus buildings by reducing energy use; reducing water and gas consumption; decreasing waste generation and increasing recycling; and diverting food waste—a large generator of methane gas—out of the waste stream to a local pig farmer in Holden. Additionally, WPI adopted a student-led initiative to collect post-consumer food waste that is utilized by the same pig farm.

Elgert said she believes climate change leaders are too concentrated in developed countries in the global north and too focused on reducing emissions that will limit warming to two degrees.

“I see the disaster in my work. The disaster is now,” she said. “They are manically focused on two-degree change, but we also have to start thinking about adaptation for communities already in the throes.”

Moreover, people with the knowledge and political involvement to properly maintain ecosystems globally are often branded terrorists and “enemies of the state,” and are subject to persecution and murder. That includes hundreds of activists killed in 2019 related to food and mining issues, and, most recently, two Mexican monarch butterfly activists who had campaigned against illegal logging.

These are the people on the climate change frontlines worldwide who are under siege in need of recognition and better protection, Elgert said.

Trajectory is not set

Eggleston said that although climate change is underway and is accelerating faster than any other time in history, the trajectory could be modified by personal choices.

“Your choices make a big difference and you have to think about what changes you can make today,” he said. “Right now, renewable power’s growth rate is higher than fossil fuels and, not long in the future, will become the dominant energy source. The question is, ‘What can you do personally?’”

Provost Wole Soboyejo closed out the session, addressing the role of WPI’s new Global School in advancing innovations to explore climate change and its global impact. The Global School will build on the university’s long-standing efforts to prepare students who are focused on science, engineering, and technology to have a significant impact on the major social, technological, ecological, and economic challenges facing people around the world. The WPI faculty voted in May 2019 to create The Global School, which will launch later in 2020.