A Worcester Polytechnic Institute (WPI) bioinformatics researcher has created and unveiled a structural 3D roadmap of the new coronavirus (2019-nCoV), a major development that potentially holds the key to understanding the spread and treatment of the deadly virus.

Using a recently published viral genome of the Wuhan coronavirus made available on the National Center for Biotechnology Information website, Dmitry Korkin and a team of graduate students used molecular modeling to reconstruct the 3D structure of major viral proteins and their interactions with human proteins.

“We’re confident that our data and visual models could provide the guidance for experimental scientists worldwide who are working feverishly to solve this pandemic,” said Korkin, associate professor of computer science at WPI and director of the university’s bioinformatics and computational biology program.

In effect, Korkin said, he and his team have created a structural genomics map of the coronavirus that will be made available to researchers and anyone worldwide.

“Anyone can download our models, get any kind of information and use it for research,” he said. “This is one of the first examples of how data-driven science can quickly respond to this challenge.”

This is one of the first examples of how data-driven science can quickly respond to this challenge.
Dmitry Korkin
Associate Professor of Computer Science

The complete 3D structural roadmap dataset and a manuscript preprint can be found at Korkin’s lab website, and will be available at bioRxiv, a free online archive and distribution service for unpublished preprints in the life sciences operated by Cold Spring Harbor Laboratory, a not-for-profit research and educational institution. Given the global concern over the new coronavirus, Korkin and researchers worldwide are using the website for rapid communication about the virus.

Korkin and his team used existing public databases to identify three different isolates, or specimens, in Severe Acute Respiratory Syndrome (SARS), a virus identified in 2003 that also caused worldwide infection and significant deaths. These could be the source of the new virus. According to the World Health Organization, there have been more than 40,000 cases worldwide, with more than 900 deaths, mostly in China—numbers that have been increasing daily as international agencies work to stem the spread of the virus, which began in Wuhan, China, in late December.

“We found that those three SARS isolates are not just similar to each other, but remarkably similar to the new coronavirus,” he said. “In fact, one of the isolates shares between 95 to 100 percent of its protein sequences.”

In explaining the 3D model findings, Korkin theorizes that multiple inserts on the genome sequence—which he likened to teeth on a key—may show how this virus is different from other coronaviruses such as SARS and MERS. For instance, while some of the inserts may block human antibodies from interacting with the viral surface protein, structural analysis suggests that some antibodies are capable of interacting with it.

Extending the analogy, the wrong key is being used to try to open a door—the door that would allow human antibodies in to combat the virus.

Korkin and his team made two other significant findings. First, WPI identified where on its protein structures this coronavirus differs from SARS. Through this identification, they were able to understand the functional implications of these differences.

Second, Korkin was able to examine the drug candidates for SARS that exist in the public database, and able to pinpoint the potential drugs that could lead to the new coronavirus treatment.

Korkin says he believes this kind of data-driven approach will become the standard for helping to solve some of the world’s biggest health challenges, as in the case of the coronavirus treatment.

“I firmly believe that using a strong bioinformatics and data-driven approach to life sciences will increasingly become the way for the science community to react to immediate health threats,” said Korkin.

As a next step, Korkin will provide the research community with further insights into the evolutionary implications of this new virus. 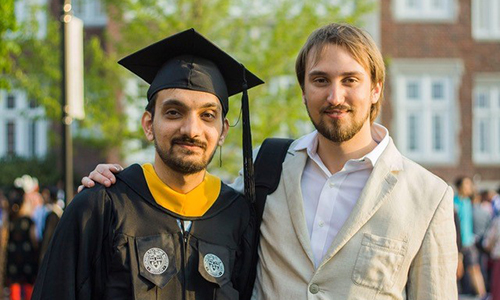 Narykov (with a friend at commencement) is on the right.

“I hope that our work on coronavirus research provides insights for the scientific community.”

Oleksandr Narykov ’21, a PhD student, is part of the team working with Dmitry Korkin on research in response to COVID-19. Their breakthrough provided the scientific community with a greater understanding of the infection’s spread and possible treatment. When Oleksandr’s not working to help solve urgent worldwide problems, he’s spending time with the Russian-speaking Students and Scholars Association and has plans to eventually complete additional research training through a postdoc position. Learn more about our graduate programs in bioinformatics.