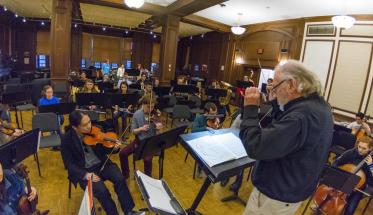 Peacemakers Offers a Hopeful Message Reflecting a Range of Cultures

Saturday’s performance will feature the WPI Orchestra and Brass Ensemble, in collaboration with the Festival Chorus

With a hopeful message that resonates well with younger audiences, and a diverse, collaborative ensemble that expresses itself via world music, this Feb. 24 concert on campus is not to be missed.

The theme of the event: peace—and the desire for peace as expressed around the world.

By design, The Peacemakers, by Welsh composer Karl Jenkins, features nontraditional instrumentation, says WPI coordinator of music and director of orchestra Douglas Weeks, at least from our American perspective. 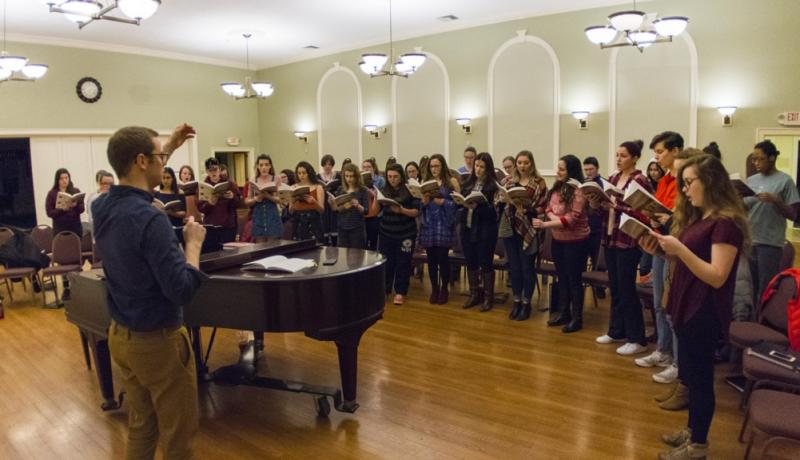 Joshua Rohde conducts a rehearsal with the Festival
Chorus.

“It reflects where these people are from,” he says—across a wide range of religions and cultures, with African drums, Indian flutes, various soloists, and jazz influences—“with text from Martin Luther King Jr., Gandhi, Anne Frank, the Dalai Lama … and others.”

Weeks and WPI director of choral activities Joshua Rohde worked together to organize the free concert, and will take turns as conductor. The concert features the WPI Orchestra and Brass Ensemble, in collaboration with the Festival Chorus.

Why this musical composition, here and now?

The theme of the piece is one that composer Jenkins dealt with in a previous work, in 2012: 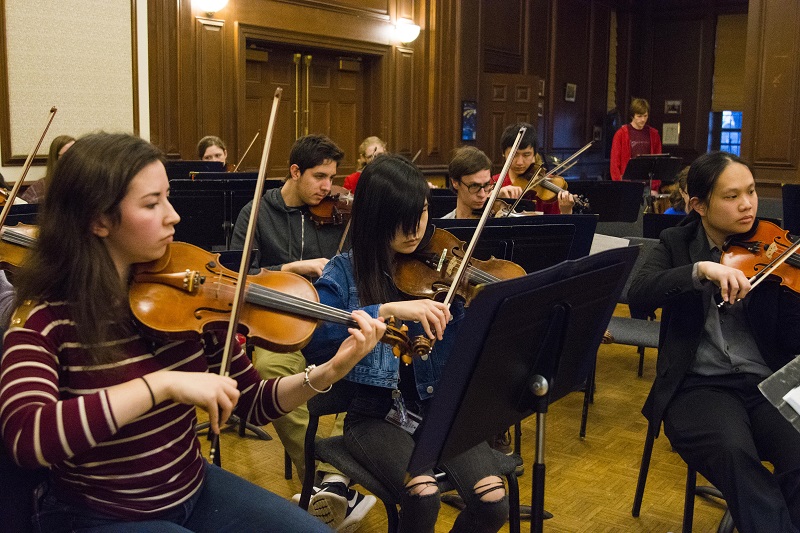 The orchestra rehearses for Saturday's performance.

“‘The Peacemakers is dedicated to the memory of all those who lost their lives during armed conflict: in particular, innocent civilians. When I composed The Armed Man: A Mass for Peace for the millennium, it was with the hope of looking forward to a century of peace. Sadly, nothing much has changed,” he is quoted as saying.

The unfortunate, seeming timelessness of a need for peace throughout the world makes the concert’s theme one that is always relatable.

“It’s not only the theme of peace, but the multicultural representation of peace, making it most impactful,” adds Rohde.

The Peacemakers was first performed in January 2012, at Carnegie Hall in New York.

On Saturday, the free concert begins at 4 p.m. at Alden Memorial. Those on and off campus are welcome to attend; the event is open to the public.

Peace, wrote Jenkins, is a universal gain—for all of us. “ … One line, from Rumi (the 13th century Persian poet whose lines I have set) sums up the ethos of [The Peacemakers]: All religions, all singing one song: Peace be with you.”