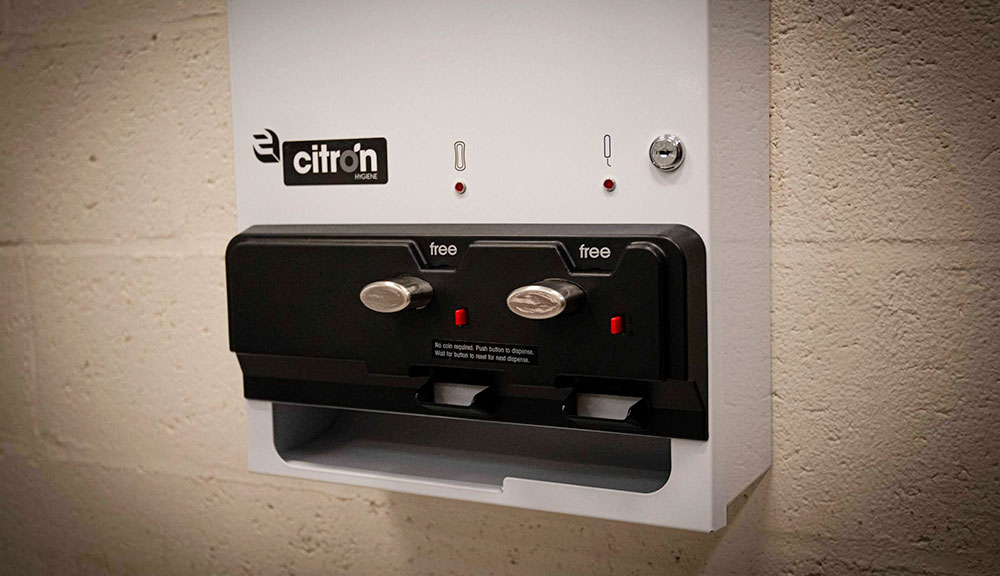 When Alexandria Lehman ’22 first heard the phrase “period poverty”—a lack of access to menstrual products due to financial constraints—she didn’t hesitate to take action. “I knew I had to get involved,” she recalls.

Two years later, this mechanical engineering major was vice president and now president of The Period Agenda (TPA), an eight-member student group that is working with campus partners to install menstrual product machines that provide the items for free in various campus locations. The Women’s Impact Network (WIN) at WPI recently awarded TPA a $10,920 grant that will fund the replacement of the current coin-operated machines with 32 new machines that will dispense products at no charge.

“A lack of access to menstrual products, whether because you can’t afford them or you just don’t have any with you when needed, can cause students to miss class and other academic activities,” says Lehman, noting TPA efforts touch on education, health, and community outreach. “By providing easy access to menstrual products, what once was a ‘menstrual emergency’ is quickly solved. It's important to normalize periods.”

“The Period Agenda, like many of WPI’s student organizations, creates a place where student voices can be heard as we work to create more inclusive and student-friendly environments on campus,” says Associate Dean of Students Emily Perlow, who has worked with the group. “I’m so proud of their strong advocacy, eye toward inclusion, partnership, and data-driven approach as they worked to bring this project to fruition.”

Initially, TPA did groundwork with Perlow, the WPI Facilities Office, and a Major Qualifying Project (MQP) team to assess the need for and value of getting these new machines. TPA conducted a free product trial whereby free pads and tampons were accessible in some gender-neutral bathrooms on campus.

“We tracked how often they were used and refilled as needed,” Lehman says. Then, the MQP team conducted a survey to determine if people supported the project. Based on the findings, the MQP team reported there was a need for free products and presented options for implementation.

TPA members then met with President Leshin to discuss the initiative. “She recommended we apply for a WIN grant, which we were very excited to receive,” says Lehman. WIN grants are funded through donations by WIN members, a diverse group of women who share a passion for education, leadership, and philanthropy. The organization supports initiatives that advance women in STEM, thereby making a difference within the WPI community and beyond.

“Facilities worked with the university’s menstrual product company and had them replace the current coin-operated machines with those that dispense free products,” Lehman says. “They also expressed interest in adding free-product machines into gender-neutral restrooms and have requested our input on which bathrooms these should go in. We’re working toward making menstrual products accessible to all genders and will post flyers all around campus to let students know about the new machines.”

TPA also has taken its mission into the local community. It has conducted product drives on campus to collect sanitary products to donate to Worcester-area shelters.

“It's been fulfilling,” Lehman says, “being able to work with a great team that has such an impact both on campus and off campus.”

Create pathways for future female leaders through funded programs. Learn how you can join the Women's Impact Network (WIN).