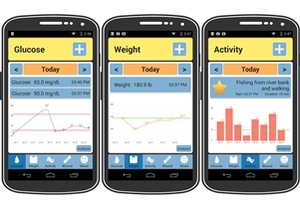 An advanced smartphone application developed at Worcester Polytechnic Institute (WPI) to help people with diabetes better manage their weight and blood sugar level and assess the status of chronic foot ulcers, is entering a pilot clinical study at the University of Massachusetts Medical School (UMMS).

Named "Sugar," the app was built by an interdisciplinary engineering and technology team at WPI in partnership with diabetes, behavioral, and wound-care specialists at UMMS. The work is funded by a grant from the National Science Foundation.

"After two years of development and testing, we're pleased to have this application move into the hands of patients," said Diane Strong, PhD, principal investigator for the program. An information technology specialist, Strong is a professor in WPI's Robert A. Foisie School of Business.

The new app runs on Android smartphones and integrates wirelessly with both a patient's personal glucose meter and scale to track blood sugar levels and weight. It also tracks exercise and other physical activity based on user input. The app then uses embedded evidence-based clinical information to prompt patients with specific messages. For example, the app might tell the patient "You measured your glucose more often yesterday compared to the day before. Well done!" or “It's been 5 days since you last exercised. Try to get in some exercise today."

The app's novel wound-assessment system uses the smartphone's camera and computational power to capture and analyze images of chronic lesions known as foot ulcers, which are potentially dangerous complications of severe diabetes and can lead to amputations.

"A key feature of the app is its ability to track the wound area and healing status, then report the information in a format easy for patients and their caregivers to understand," said Peder C. Pedersen, PhD, professor of electrical and computer engineering at WPI, who led development of the wound image analysis system. "For the first time, this system will give patients the ability to play an active role in their wound care."

David Harlan, MD, the William and Doris Krupp Professor in Medicine and director of the UMass Memorial Health Care Diabetes Center of Excellence, advised the WPI development team. He said his objective in this effort is to "test any new therapeutic approach to determine if it could make life easier or better for patients with diabetes."

According to the U.S. Center for Disease Control and Prevention (CDC) some 29.1 million Americans now have diabetes and 86 million more have "pre-diabetes," meaning they already have higher than normal blood sugar levels. People with pre-diabetes are likely to develop the disease within five years unless they make lifestyles changes to reduce their risk. Diabetes is often called an epidemic, with diagnosed cases in the United States more than tripling since 1980 and with 1.5 million new cases being diagnosed annually, the CDC reports.

Locally, between 200 and 300 lower limb amputations are performed in a typical year at UMass Memorial Medical Center in Worcester, Dr. Harlan said, with the vast majority being related to poorly controlled diabetes and ulcers that don’t heal.

The pilot clinical study at UMMS plans to enroll 30 diabetic patients who are being treated for foot ulcers at the medical center’s wound clinic. Patients will use the app for approximately six weeks, or the period that spans three visits to the wound clinic. Their progress in wound care and healthful lifestyle measures will be compared to others who do not have the app but receive the current standard of care provided by the clinic.

Before launching the clinical study, the Sugar app underwent several rounds of testing and refinement at WPI. Once a working prototype was ready, a group of WPI employees with diabetes or prediabetes volunteered for a non-clinical usability study to test how the app performed and to provide feedback. Part of that study was done at WPI's User Experience and Decision Making Laboratory (UXDM), which uses eye-tracking technology to evaluate how a user interacts with an application.

In addition, the foot ulcer tracking system was evaluated over a 12-month period at the wound clinic. It was first tested on a model foot with simulated wounds that is used in medical education, then on photos of real foot ulcers taken while patients visited the clinic. Pedersen and his doctoral student, Lei Wang, developed an LED-illuminated image capture box that sits on the floor to make it easier for patients with limited mobility to take a photo of the sole of their foot. With the smartphone clipped onto the box, the patient positions his or her foot and simply says "take photo." The voice-activated app records an image and then uses advanced, customized algorithms to define the boundaries of the wound and analyze the colors of tissue within it. By tracking color and boundary changes over time, the app assesses whether the wound is stable, healing, or getting worse.

Details of the wound image processing system and results of the early tests are reported in the paper "Smartphone-Based Wound Assessment System for Patients With Diabetes" published in the February 2015 issue of the journal IEEE Transactions in Biomedical Engineering.

"We are pleased with the performance of the wound assessment system so far and are eager to see how the app compares to the assessments made by clinicians working with patients in real time," Pedersen said.

Currently, treating chronic foot ulcers is a significant challenge because walking on ulcerated feet may cause further trauma. Even visiting a physician’s office for an examination can require ambulance transport and cause additional injury or stress. If the clinical testing shows that the Sugar app's assessments of wound status match those of the physicians, then in the future it may be possible for patients, in consultation with their physicians, to use the app to decide if they can care for and dress the wounds at home or if a doctor’s visit is needed, Pedersen said. To assist this consultation, the wound image and the assessment could be sent electronically to physicians for review.

Janice F. Lalikos, MD, professor of surgery at UMMS and co-principal investigator for the Sugar project, said that while the pilot study is focused on diabetic patients with food ulcers, the app could benefit many other patients who require repetitive follow-up visits to wound care clinics for other conditions. "The ability to visually monitor patients' wounds through the app could support and complement treatment plans and streamline care, particularly in rural areas where access to clinics is limited and in situations where it is difficult for patients to travel," Lalikos said.

Rolling recruitment of 30 patients for the clinical testing is expected to take several months. The entire pilot study is expected to extend through most of 2015.

Additional UMass Medical School faculty who provided clinical support for the project are Raymond Dunn, MD, professor of surgery and chief of plastic and reconstructive surgery at the medical center, and Sherry Pagoto, PhD, associate professor of medicine and a licensed clinical psychologist at the UMass Memorial Weight Center.

"This is an effective team effort that shows the value of bringing together the engineering and clinical expertise of our institutions to help improve health care delivery," Strong noted.