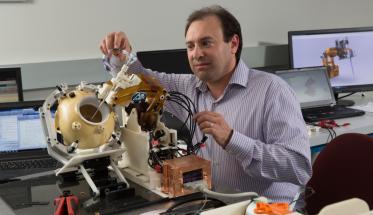 The Robotics War on Cancer

Some people design robots that can assemble circuit boards or vacuum your floor. Gregory Fischer, PhD (above), professor of mechanical engineering and robotics engineering and director of WPI’s Automation and Interventional Medicine (AIM) Laboratory (aimlab.wpi.edu), has other things in mind: He wants his robots to take biopsies from cancer patients more accurately and efficiently, and perform brain surgery more safely and effectively.

And he is tantalizingly close to achieving both milestones.

A Robotics Revolution in the AIM Lab

Fischer has made his mark by developing robots that can work inside MRI scanners, enabling surgeons to operate guided by real-time medical images. One robot, which he spent years developing in conjunction with colleagues at Johns Hopkins University, is in clinical trials at Brigham and Women’s Hospital (BWH) in Boston, where it is being used to help take biopsies from prostate cancer patients. (The trials are part of a program led by Clare Tempany, MD, a professor of radiology at Harvard Medical School and chair of research radiology at BWH, and supported by the National Institutes of Health’s National Center for Image Guided Therapy and with a Bioengineering Research Partnership grant from the National Cancer Institute.) 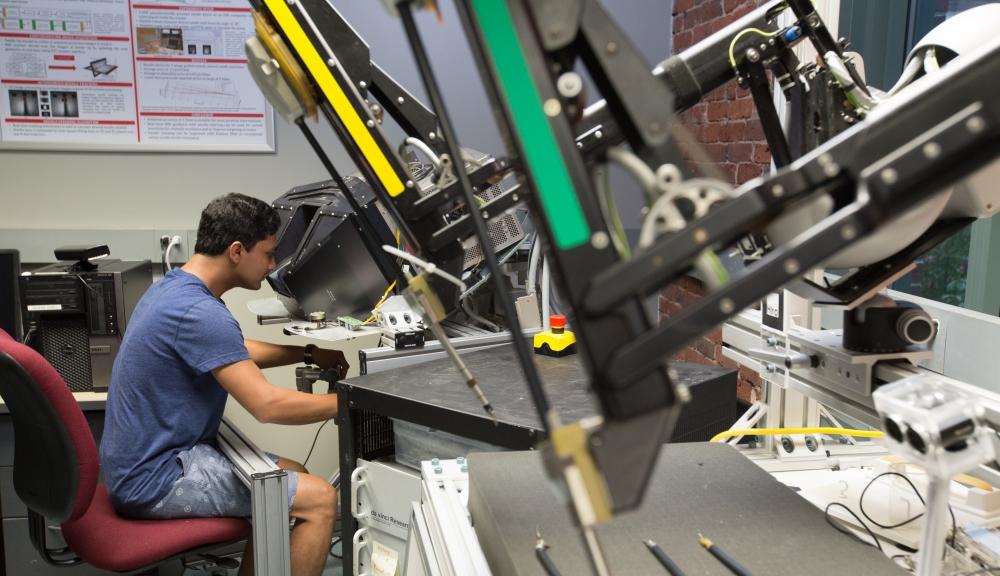 While MRI-compatible robots are the main attraction in the AIM Lab, Fischer and his collaborators have also developed a custom research-focused controller for the da Vinci Surgical System, a tele-operated surgical robot made by Intuitive Surgical that is used to perform minimally invasive procedures. The controller, which includes both hardware and software and is completely open-source, is enabling researchers around the world to use a common, shared infrastructure to investigate methods for extending the da Vinci system’s capabilities, with an eye toward auto-mating surgical procedures and improving their safety. Fischer’s team in the AIM Lab is also actively pursuing wearable soft robotic assistive devices and socially assistive robots.

The Dawn of MRI-Compatible Robots

Fischer also holds an appointment at WPI in biomedical engineering and is faculty director of WPI’s Healthcare Delivery Institute (see page 40), has been developing innovative medical technologies since he was a graduate student at Johns Hopkins, where he helped design an augmented reality system for surgeons that projected MRI scans directly onto patients. He also worked on the early forebears of the robot that is currently in trials at BWH: a robot that sits inside the cylindrical bore of an MRI scanner along with the patient, helping a doctor guide a biopsy needle far more accurately into a walnut-sized prostate gland with the aid of up-to-date images. 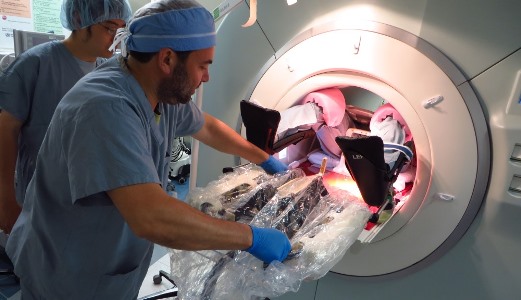 In conventional prostate cancer biopsies, doctors determine where to insert their needles by relying on previously acquired, preoperative imaging; they can also use intraoperative ultrasound, whose resolution pales in comparison to that of MRI. Some hospitals combine preoperative MRI scans with live ultrasound images taken during the procedure itself, but that, too, is not ideal, Fischer notes. Patients (and their organs) can shift and move, and the very act of inserting a needle in soft tissue can cause it to swell and deform, altering the position of the target and rendering those high-resolution pre-operative scans obsolete. As a result, doctors often must perform multiple needle insertion attempts, and the low sensitivity of biopsies means they may have to be redone, ratcheting up the procedure’s cost and the patient’s discomfort. Hence the attraction of Fischer’s robot: by improving accuracy and reducing guesswork, MRI-guided robotic needle placement ought to make the act of taking a biopsy cheaper and faster — and less taxing on the patient.

Aiming for Better Outcomes with an Innovative Robot

Gregory Fischer, a professor of biomedical engineering and the faculty director of WPI’s Healthcare Delivery Institute, creates robots that make medical biopsies cheaper, faster, and easier for a patient. Fischer’s robots are changing the diagnosis landscape.

Turning that dream into reality hasn’t been simple, though.Creating mechanical systems small and precise enough to perform delicate medical procedures inside the confined space of an MRI scanner — a cylinder roughly half a meter wide that must also accommodate a patient, other medical equipment, and sometimes even a clinician — was enough of a challenge. But MRI machines create images using radio waves and a powerful magnet, so nothing designed to go inside them can be made from ferrous metals like iron and stainless steel. Fischer ultimately met that requirement by using plastic parts, piezoelectric ceramic motors, and only small bits of non-ferrous metals, like brass.

The electronic noise generated by commercially available motion control systems created another headache, since those stray signals will seriously degrade the quality of a magnetic resonance image. So Fischer and his students had to design and build custom controllers capable of feeding signals to the robot’s ceramic motors with high precision and zero noise.

By improving accuracy and reducing guesswork, MRI-guided robotic needle placement ought to make the act of taking a biopsy cheaper and faster — and less taxing on the patient.

In addition, achieving true “closed loop medicine,” in which procedures are guided by real-time feedback, meant continuously updating the robot’s trajectory. MRI machines are true 3-D scanners that can generate images in any position or orientation. Fischer and his team had to figure out how to integrate the communication protocols and software interfaces used in commercial MRI scanners with the custom versions they had developed for their robots, so the system could acquire images; use image processing to determine the location and orientation of the instrument; update the robot’s path based on that information; and repeat the process in a continuous loop so that the robot could hit the bull’s-eye. “That,” Fischer says, “was especially difficult.”

Safety was also a critical consideration. The robot currently undergoing trials at BWH is a first step toward MRI-guided, robot-assisted procedures, and its job is to align the biopsy needle; but when the time comes to insert it, the robot disengages and a doctor pushes it in. Fischer envisions a day when the robot will steer and insert a needle or probe, either autonomously or semi-autonomously (these features are currently in development on preclinical prototypes). Toward that end, he’s designed his latest model “from the ground up” with safety in mind. He overhauled the already sophisticated controllers to gain more coordinated command of the robot’s moving parts, giving the system the capacity to detect and recover from errors, and granting users the ability to selectively disable axes of motion so that the robot can’t realign itself at the wrong moment and harm the patient. 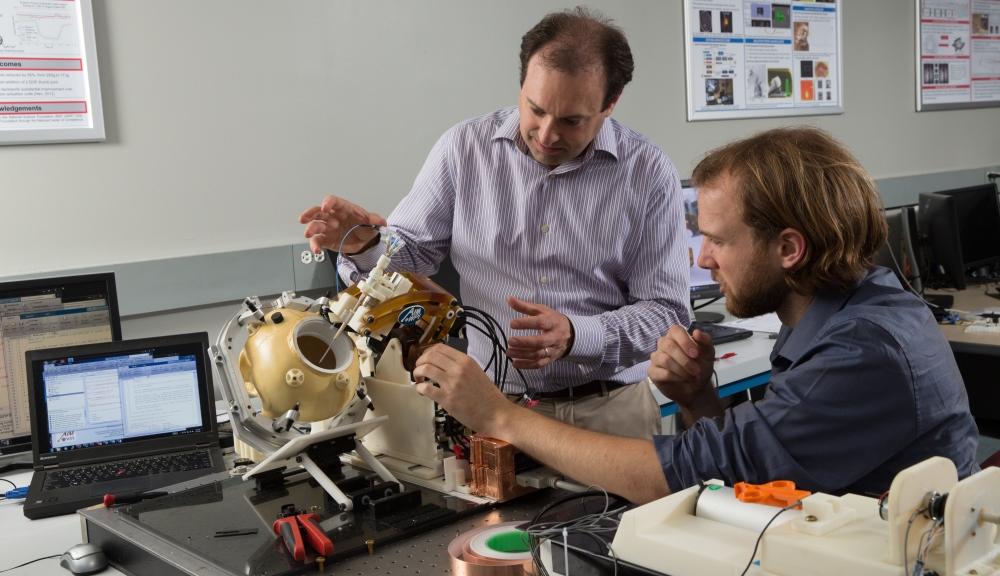 That may be especially important for the neurosurgical robot that Fischer is currently developing.

Soon after Fischer joined the WPI faculty in 2008, he was contacted by Julie Pilitsis, MD, PhD, a neurosurgeon specializing in deep brain stimulation who was then director of functional neurosurgery at UMass Memorial Medica lCenter and is today a professor of surgery at Albany Medical Center Hospital. She recognized that Fischer’s MRI-compatible robots could also be useful in the neurosurgical suite, where precision is paramount. The two began working on a unit that could be used to insert electrodes into the brains of Parkinson’s patients to control their tremors. Soon, though, they turned their attention to cancer therapy.

Working with colleagues at the University of Massachu- setts Medical School and Acoustic MedSystems, an Illinois-based company that develops image-guided ultrasound and radiation therapy systems, they are developing an MRI-compatible robot that can destroy brain tumors using high-intensity beams of focused ultrasound. The work is funded by a five-year, $3 million award from the NIH.

Fischer says that kind of minimally invasive ultrasound ablation would avoid some of the problems associated with current treatment methods like radiation-beam therapy and open-brain surgery. And the focused nature of the ultrasound beams, coupled with the real-time MR imaging and precision placement afforded by the robot, should allow surgeons to accurately and completely target even irregularly shaped tumors without damaging the healthy tissue around them.

What’s more, because ultrasound ablation destroys tissue by heating it, and because MRI scanners can detect temperature changes, surgeons will be able to use live thermal imaging to generate real-time temperature maps of their patients’ brains during a procedure to ensure that just the right amount of ultrasound energy is delivered to just the right spot — an approach that could be used to zap other kinds of tumors, as well. Fischer plans to conduct pre-clinical evaluation of the system over the next two years, with the goal of securing approval for human trials when the grant ends.

For Fischer, the ability to translate technological innovations into the clinic so quickly is what makes the field of medical robotics exciting. Other areas, such as gene therapy and immunotherapy, he says, may hold great promise for cancer treatment; but significant breakthroughs could be many years away. By comparison, his robotic systems could be ready for prime time in as little as two to three years. And the potential to improve the quality of patient care in the near term makes all the difference.