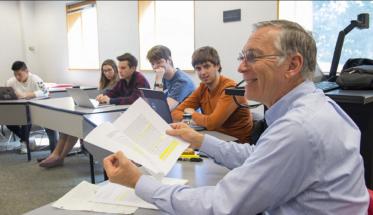 The students in Craig Putnam’s course on the social implications of robotics have just finished discussing the ethical considerations of using robots in the military.

Simple robots controlled by human beings are one level, but what about autonomous robots? What ethical judgments would go into the design of that type of machine? 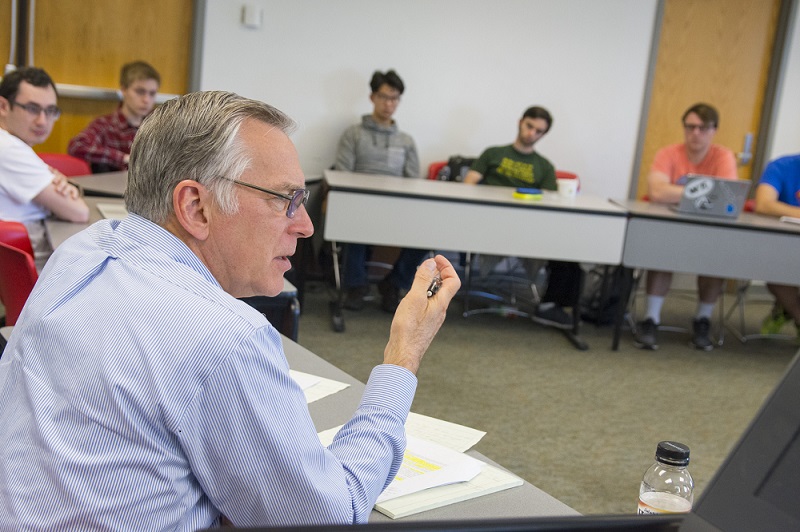 Craig Putnam in discussion with his class.

The new course, RBE 310X, launched in A-Term with 18 students from WPI’s Robotics Engineering program, is meant to grapple with the thorny social questions that will continue to increase as robotic systems become increasingly prevalent in the world.

“The course introduces students to the social, moral, ethical, legal, and philosophical issues associated with robotic systems,” Putnam says in the course proposal that was approved by WPI faculty and administration. The course, he says, “is designed to introduce RBE majors to these types of questions and encourage them to think critically about how they might address them once they enter the workforce.”

Putnam, associate director of the robotics program, says he decided to design and propose the course after robotics students told him they wanted a way to meet the university’s social implications requirement with something that dealt with the dilemmas they will face in the working world.

“There seemed to be a need there,” says Putnam. “It seemed like an obvious thing to do—to create a course that embraced the social implications of robotics.”

Putnam joined the WPI robotics program eight years ago. The program, which celebrated its 10th anniversary this year and has grown exponentially, was the first undergraduate robotics program in North America. It awarded its first four bachelor’s degrees in 2009 to students who had switched majors. This past year, 75 degrees were awarded, along with 56 master’s degrees and two PhDs. The program has awarded 391 bachelor’s degrees since it started.

The program offers 20 courses and 11 labs across the disciplines of computer science, electrical and computer engineering, and mechanical engineering.

The students in the new social implications course spent the first several classes in going over ethical systems, such as utilitarianism, consequentalism, and virtue ethics. Now they are applying these systems to issues such as job loss from robots, robots in the military, and robots in healthcare.

Next up is self-driving cars.

“The students thought it would be a useful and a smooth segue to go from military aspects to self-driving cars,” says Putnam. “There’s a ton of implications in that area.”

“There seemed to be a need there. It seemed like an obvious thing to do—to create a course that embraced the social implications of robotics.” -Craig Putnam

Putnam notes that the movement toward self-driving cars is more or less consensus across the industry. But, he adds, “Where it gets interesting is it’s up to the individual vehicle manufacturer to decide at what level of autonomy their system is operating.”

Putnam hopes to invite some insurance experts to talk over insurance questions for self-driving cars.

As the course began, students chose either a classification of existing robot type or an emerging robotic technology that they will apply in exploring ethical design decisions and problem solving for the remainder of the course.

“Students are expected to research and analyze, and then be prepared to discuss and write about such topics as human­-robot interaction, autonomous control, moral decision making, ethics in law, and philosophical issues within the context of their chosen robotic system or emerging technology,” according to Putnam’s course description.

“After each week of exploration, students will engage in a class activity related to their recent readings,” the proposal continues. “These activities may include such things as presenting an elevator pitch about a problem that has been solved to make their class of robot more socially adept, debating the ethical or moral implications of certain design decisions, or proposing a solution to an existing problem.”

Five such analyses are compiled into a paper, including a study conducted to determine a social opinion related to the class of robot chosen. The results are then presented to the class in the final week of the course.

The course is listed as experimental. Putnam will teach it in B- and C-terms, making any adjustments as needed and keeping the number of students to a manageable 18.

Putnam hopes that if the course is successful it can eventually be used by students to fulfill not only the social implications requirement but also the university’s social science requirement.

In his course proposal, he also suggests that RBE 310X would help strengthen the program’s credentials with the Accreditation Board for Engineering and Technology (ABET).