As Mike Gennert steps down after 10 years as the founding director of the Robotics Engineering program at WPI, consider the program’s extraordinary success.

Begun in 2007, the university’s undergraduate degree program in robotics—the first ever in the nation—awarded its first four bachelor’s degrees in 2009 to students who switched majors. This past year 75 such degrees were awarded. 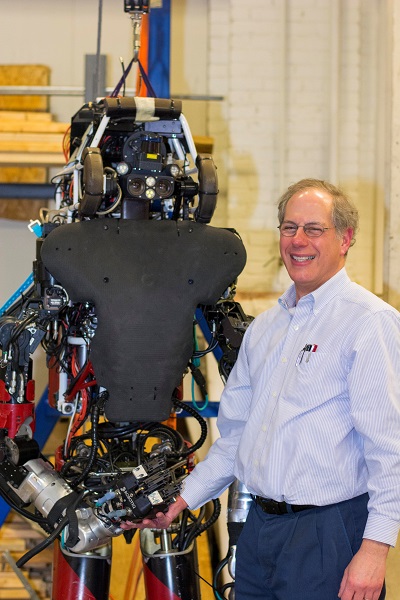 “Not to mention the 56 master’s degrees and two PhDs,” says Gennert, whose last day as director was June 30.  The program has awarded 391 bachelor’s degrees since it started, he says.

In 2006 WPI offered two robotics courses. Now there are 20+ courses and 11 labs just for robotics, combining the disciplines of computer science, electrical and computer engineering, and mechanical engineering.

“It’s a lot of things,” says Gennert, who is leaving on sabbatical but will be back to teach computer science and robotics. “One is this is now the best-established, best-known undergraduate program in robotics in the country. That’s certainly a factor.”

Gennert, who came to WPI as a computer science professor in 1987 after earning his PhD in Electrical Engineering and Computer Science at MIT, recalled what lit the fire of robotics for him.

As a student, he had taken a robotics course at MIT that dealt with the basic foundations of the discipline. But the robot was off in a lab somewhere—not very accessible to students.

After he took over as head of WPI’s computer science department in 2003 he visited Helen Greiner, a founder of Burlington-based iRobot and a member of the department’s advisory board. She gave him a Roomba robotic vacuum. He took it back to WPI and turned it on.

“Oh my God, it worked,” he recalls saying at the time. “Here we have a robot in my office. Twenty-five years after that class the robot has jumped off the lab bench and is rolling on the floor.”

The idea of starting a robotics program had been in the air at WPI for a while, bolstered by the school’s long association with inventor Dean Kamen’s FIRST (For Inspiration and Recognition of Science and Technology) robot competitions for high school and middle school students.

When, in 2006, then-associate provost William Durgin asked department heads to think about developing a program, Gennert jumped at the chance.

“I replied saying I would bet on robotics and get something started,” he said.

It took a year of collaboration between departments to put the program together before it launched in the A-Term 2007.

Since then, the program’s stature as a successful academic pioneer in the robotics field has grown worldwide. In fact, this summer Craig Putnam, the program’s associate director, is traveling to Beijing University of Chemical Technology to continue discussions with faculty and administrators on how an undergraduate robotics program can best be established there.

During Gennert’s time as director, program faculty, researchers, and students have participated successfully in a wide range of competitions meant to demonstrate the effectiveness of robots in a number of challenging scenarios.

At the 8th Annual Robotic Mining Competition, a NASA-sponsored event at the Kennedy Space Center in Titusville, Fla, WPI won the Regolith Mechanics Award  The team of five recent graduates and two advisors built a robot named Markhor that successfully completed tasks that would be needed to collect and transport soil and ice samples on the surface of Mars.

In the SailBot competition on the Chesapeake Bay at Annapolis, Md., WPI won the 11th annual International Robotics Sailing Competition. The students used their robotics knowledge to create autonomous boats up to two meters long that could lead to low-cost oceanographic research vessels used for pollution control and surveillance.

The robotics program has also worked with NASA on an annual competition in which teams of students and researchers have won thousands of dollars by developing robots that perform tasks laid out by the space agency. WPI has managed the Sample Return Robot Challenge as part of NASA’s Centennial Challenges program.

In 2015 WPI faculty, engineers, and students partnered with Carnegie Mellon University to program a 6-ft. humanoid Atlas robot named WARNER that successfully competed in challenges sponsored by the Defense Advanced Research Projects Agency. The challenges were designed to get the robots to perform human actions with an eye toward using them in dangerous emergency situations, like a meltdown at a nuclear plant.

"We have pioneered a curriculum that really seeks to integrate computing, electrical, and mechanical concepts, and beyond—that we have a significant requirement on social issues involving robotics. We expect our graduates to be very thoughtful professionals because this is such a disruptive technology.” -Mike Gennert

Gennert says the burgeoning interest and growth in the program parallels dramatic developments in the field that have made robots more a part of the human experience.

“What’s driven this is all the advances in the supporting disciplines—algorithms, computing power, machine learning, battery power, networking and storage—that have made possible things you could only dream about in the past and now you can make it work,” he says.

Not long ago, humans had to stay out of the way of robots on assembly lines. Now the workers are handing tools and components to the robots, Gennert says. Robots are now used in surgery and other important human tasks. And robotic technology is an important factor in self-driving cars.

“It just shows you how we have had to rethink robots and what they can do,” he says. “They are with us. They are in our environment.

“So we have pioneered a curriculum that really seeks to integrate computing, electrical, and mechanical concepts, and beyond—that we have a significant requirement on social issues involving robotics. We expect our graduates to be very thoughtful professionals because this is such a disruptive technology.”

Gennert expects further growth in the years ahead. “That’s an understatement,” he observes.

Professor David Cyganski will serve as interim director of the Robotics Engineering program. He is a professor of electrical and computer engineering and has served as interim dean of engineering.

Gennert says he has left the director’s post because he believes in term limits.

“I love this job. “he says. “I find it immensely rewarding. But I want to step aside when things are going great rather than stay here too long. Ten years is long enough.”

And what has satisfied Gennert most about his tenure as he looks back on a decade?

“I am most proud of how we are giving our students this unmatched opportunity to learn and create—to go out and change the world," he says.

“Where else can a freshman come to college and get involved in a team that's competing with a $2 million robot? We have freshmen, seniors, master’s students, PhDs, faculty working side by side in our labs.

“I’m also very proud of how well we've all worked together to make this program happen," he says. "We’ve had enthusiastic support from the custodians to the president. Literally.”