A slate of upgrades for Boynton roof, Harrington locker rooms

When it comes to roofing, patchwork over patchwork can only continue for so long. Such was the case with the roof of Boynton Hall, built in 1865. “Some, we believe, were original,” says WPI director of construction services Jim Bedard, regarding the old slate roof sections.

The historical roof project work has been completed, he said, as has a redo in the varsity locker room in Harrington Auditorium. Both were considered priority projects.

At the end of each year, Bedard says, the WPI Facilities team decides what campus capital projects should get first priority and presents those proposals to senior management. “We get projects highly invasive to the community out of the way over the summer,” he says, when students and faculty aren’t on campus. In the case of the locker rooms, for instance, they had to be moved out of the connector so work can move forward on the razing of Alumni Gym, the footprint of which is being repurposed into a student innovation center. The leaky Boynton roof was determined to be more than ready for replacement.

Roof work, Bedard says, can be disruptive on a campus. So the project work began the day after Commencement to allow ample time to wrap it up before the new academic year.

WPI worked with the city’s Historical Commission, presenting the proposed renovation for the Boynton Hall roof. The goal was to restore the roof as close to the original as possible, Bedard says, including the preservation of its characteristic red banding.

In order to avoid snow and ice buildup, the project added heat trace to the scuppers at the front of the building, the rear pitched edge by the dormers facing Washburn, as well as the lower section of the roof facing the Quad, Bedard said. 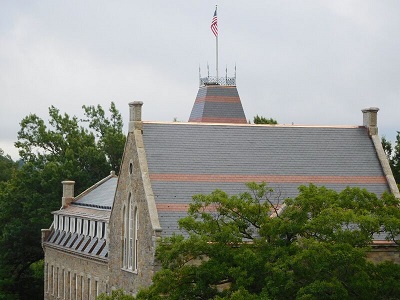 Bedard, former facilities director for Worcester Public Schools, is accustomed to dealing with structures with historical implications. He served as project manager and kept the project on schedule. Crocker Architectural of North Oxford and Hoffman Architects of Hamden, Conn. is the same team that performed the restoration of the Washburn Shops, the second-oldest building on campus.

Varsity men’s and women’s locker rooms in Harrington had to come out of the Alumni Gym connector to make way for the Innovation Center. The 12,000-square-foot space now includes lockers for coaches and officials, benches, showers, and restrooms, and has been used by the football team already, says Bedard.

Calling it a “summer slammer,” Bedard says of the locker room project. “We worked double shifts toward the end to get it done.”