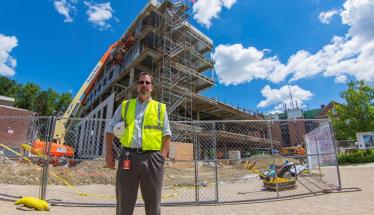 In addition to the various types of routine deferred maintenance projects planned for the WPI campus over the summer, two major construction projects stand out.

Jim Bedard, director of construction services, says that the largest project is the ongoing construction of the Foisie Innovation Studio and Messenger Residence Hall. Demolition of Alumni Gym was completed in September, and the new building foundations were poured the following month.

The structural steel was erected and concrete slabs put into place during the first part of this year; precast panels were attached to the outside of the building earlier this month. Mechanical systems, drainage, and the curtain wall window system will be installed between now and September. Plans are to complete the building shell by putting the roof on before winter conditions arrive in November.

Once the outside of the building is secured, the plumbing, mechanical, electrical, and fire protection work can continue through the winter. In the spring, after the heavy equipment has been removed from the site, final polishing will include the landscaping and exterior trim for the August 2018 official opening.

The $49 million, 78,000-square-foot facility will be home to a variety of academic spaces ranging from high-tech classrooms to an innovation and entrepreneurship center and a global impact lab that will support the “hands-on” aspect of the WPI curriculum. The building is named for Robert A. Foisie, a 1956 graduate of WPI and the university’s most generous individual donor, whose lifetime commitments have helped nearly 600 students realize the dream of a WPI education.

The building will also include a three-floor residence hall with space for 140 students. The naming of the Messenger Residence Hall honors Priscilla and George Messenger Jr. ’51 for their lifetime support of WPI students. The couple established the George and Priscilla Messenger Endowed Scholarship Fund in 2001.

The other major project on campus is the renovation of the area that once housed the now-decommissioned nuclear reactor in the Washburn Shops.

The non-power Leslie C. Wilbur teaching reactor was rated at 10KW, and was installed in 1959 to give WPI students the opportunity to explore the design and operation of power plants, anticipating the nuclear energy industry. Classes in various aspects of nuclear energy were taught using the system until the reactor was decommissioned in 2011.

The decommissioning process involved following the regulations mandated by the Nuclear Regulatory Commission (NRC) in order to make the space safe for unrestricted reuse. This included a cleanup to  ensure sure there was no contamination, which was completed in 2014. Most of the heavy renovation work is to be completed by mid-August, prior to students returning to campus for the new academic year.

In addition to those two large projects, completion of some important upgrades to the west campus electrical power substation will be performed. A power shutdown has been scheduled for a significant portion of the campus on Friday, June 30, from 6 a.m. to 6 p.m.

During the power shutdown there will be no food services available on campus. Mail services will also be affected for the entire campus, with access from 9 a.m. to 1 p.m. only at the loading dock at the rear of the Rubin Campus Center. This outage will affect Alden Memorial, Riley Hall, Daniels Hall, Morgan Hall, Harrington Auditorium, Higgins Labs, Rubin Campus Center, Bartlett Center, Olin Hall, Goddard Hall, and Higgins House. The Sports and Recreation Center is on a separate grid and will not be affected.

While the campus will remain open, all affected buildings will be closed and inaccessible, due to fire and safety regulations. Alternative work spaces for affected employees can be found in the library and open buildings; employees are advised to contact their mangers, supervisors, or the WPI Human Resources Department for more specific information.

When leaving campus on Thursday, June 29, faculty and staff are reminded to turn off all computers when leaving their work area. Considerations should be made for cleaning out any office refrigerators prior to the long weekend.

Contact Jim Bedard in the WPI Facilities Projects Office with any questions.