On the Trail of a Killer

Every year more than a quarter million American women are diagnosed with breast cancer. Another 40,000 will die of it. One in eight women will be diagnosed with the disease during their lifetimes.

But even for the millions of women who sidestep the disease, keeping tabs on cancer’s whereabouts is a demanding and disagreeable task: women over 40 typically undergo uncomfortable mammograms every year or two. Millions receive “abnormal” results, requiring additional appointments, invasive biopsies, and weeks of stress from the uncertainty—even though a full 80 percent of those further test results are benign.

Ask University of San Francisco biology professor Juliet (Vescio) Spencer and she’ll tell you that this messy, anxiety-producing process is ripe for change. And thanks to her groundbreaking biomedical research, she just may be the one to accomplish it. “My long-term dream is to develop a screen with a blood draw that women would have done when they get their mammogram. It would be as ordinary as a Pap smear,” she says, referring to the routine test that has dramatically reduced the incidence of cervical cancer. “Those two pieces of information, the mammogram and the blood test, would provide a picture of what’s going on in a much less invasive way than a biopsy.”

A Start in Biotechnology

If she could not have exactly predicted that she would spend her career searching for ways to diagnose deadly diseases, she could at least see the hazy outlines when she applied to WPI.

Spencer, who grew up in Rome, N.Y., a few hours from WPI’s campus, was drawn by the university’s program in biotechnology, one of the first of its kind. She was also intrigued by its practical, project-based approach to learning.

“I liked the small classes and great lab activities,” she recalls. “We really got to do science.”

She quickly saw success with this approach. As part of her MQP, she worked in the lab of biology professor David Adams, where she and a team of students helped clone the gene that produces a protein known as ependymin in an animal model. The protein is linked to memory formation and nerve survival, and several biotech companies were interested in exploring the possibilities it offered. “We eventually went on to identify, clone, and sequence the human version of that gene,” Adams recalls. “It was a very exciting time in the lab.”

That spark of excitement generated from real, hands-on work on relevant research was exhilarating. It guides much of the work she does today at USF. “I try to give my own students a similar experience by including them as we work on cool techniques, having them help with research projects, and giving them opportunities to develop marketable skills,” she says.

Spencer furthered her education at the University of Virginia, where she earned a PhD in microbiology. She specialized in virology, and was particularly interested in the herpes simplex virus. Fascinated by the way the virus assembled and replicated, she used skills she’d acquired in electron microscopy and molecular work to explore its mechanisms.

While her work was basic foundational research, the undercurrent of potential practical applications buzzed just beneath the surface. “I wasn’t screening for drugs, but I could imagine what that might look like,” she says. “I could imagine the significant therapeutic potential for slowing down virus replication in people who are infected. That was something I liked.”

The idea that her research could ultimately have a positive impact on human health fueled her. At a conference in California, she met up with a friend who worked at a start-up drug discovery company in San Francisco. “By the way,” the friend said when they met, “we’re hiring herpes virologists.”

Spencer laughs when she recalls the conversation now. “Trust me, you don’t hear that every day,” she says. She applied for—and got—the job. The start-up world in the Bay Area was particularly fizzy in the early 2000s, and it wasn’t long before she landed another job working on similar problems, this time linked to cancer.

Again, she didn’t stay long. It was 2002, the bubble that had kept so many companies afloat had burst, and Spencer saw the writing on the wall. But what she did take away from the experience has helped propel much of the rest of her career: an interest in a powerful and sometimes devastating protein known as CMV IL-10. (short for human cytomegalovirus interleukin 10).

Spencer enjoyed her time in the start-up world, but she never forgot that her real goal was to get back to the academic lab. When a position opened at the University of San Francisco, she landed a coveted appointment that came with a small start-up package to launch her lab. There, she launched new research into CMV IL-10.

Unlike its helpful cousin IL-10, whose job includes sounding the alarm bells to prevent tumors in our body from spreading, this protein baddie tells our immune system that everything’s just fine—even when it’s not. While CMV itself—the virus that leads to the production of CMV IL-10—is quite widespread in humans, its troublesome side effects are seen primarily in immunocompromised people.

Spencer spent the first few years in her labs characterizing the protein, but she eventually got to wondering if there was a way to measure CMV IL-10 in blood. Could such information provide clues to diagnose—or track the progression of—certain diseases?

She landed a prestigious National Institutes of Health grant to pursue early work with cells in culture linked to this idea. Her research suggested that certain levels of CMV IL-10 could be useful for early detection of breast cancer.

The results were so promising that the Avon Foundation signed on in 2014 to have her lab develop a blood test that could measure CMV IL-10 and try to detect breast cancer.

The idea was clear and straightforward. But as in so much of scientific research, translating that idea to reality has proved a rocky path, Spencer acknowledges. The test itself was challenging to create, and working with local breast cancer support groups to collect blood samples has been time-consuming. When an unexpected shortage of samples made it difficult to analyze her data, she tracked down a store of samples through the U.S. Army’s Breast Cancer Research Program—only to learn that getting all the approvals to use the information would take 18 months. She has met every hurdle with dogged optimism, recognizing that it’s simply the price for accomplishing even bigger goals. “Reality is messy,” she says. “But the results have the potential to take us to another level.”

Spencer’s resilience seems baked right into her DNA, says her husband, Jesse Spencer ’93. “She’s not afraid of failure,” he says. “She treats it as an opportunity to learn and improve for next time.”

It’s that sense of persistence in the face of obstacles—and the overarching sense of the work’s larger purpose—that she tries to instill into the many students she mentors, particularly the women. She makes introductions, suggests internships, and takes students to conferences, providing the connections and knowledge they need to excel at their next steps. 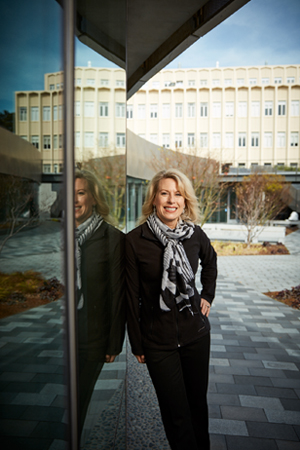 Spencer was instrumental not just in helping Katie Arnolds, a former student who is working on a PhD, learn the technical skills of her work, but also teaching her how to present her work as effectively as possible. Spencer would go through Arnolds’s presentations slide by slide, making sure that each one had a clear and cohesive story. “She encouraged me to push myself, to take risks, and work hard,” Arnolds says. “Following her guidance and being trained by her has given me a tremendous amount of confidence in my abilities to learn new things and really excel in the field.”

Another of her former students, Carolyn Tu, says that Spencer’s relentless focus on the potential impact of the work kept her inspired—even when the work itself got frustrating. “Being a grad student in Dr. Spencer’s lab helped me keep sight of the bigger picture,” says Tu. “She’s always reminded us of the importance of connecting our research to public health.”

Spencer says that having an impact on the next generation of biologists is often just as rewarding as creating an elegant experiment or getting promising data from her work. “A big part of my job is being a cheerleader—to provide encouragement and support,” she says. “And I take that seriously.”

She’s been recognized for it, too. In 2009 she received the Ellen Weaver Award for mentoring women in science, an honor presented by Northern California Chapter of the Association of Women in Science.

As Spencer looks ahead, she is eager to make further strides to diagnose breast cancer early—research that has the potential to affect millions of women. While her most important work is in process, she is optimistic about its direction. “We still need to finish the data analysis and do rigorous statistical analysis, but the trends we’re seeing look promising,” she says.

For a disease like cancer, where early diagnosis and treatment can be the difference between life and death, the urgency and importance of her work couldn’t be clearer. “The more information we can provide to help women and their doctors monitor their health, the better,” Spencer says. “The goal, for me, is to use what we know to prevent disease, treat disease, and improve human health.”