Leaders of the U.S. Council on Competitiveness and Rethink Robotics will deliver addresses.

Worcester Polytechnic Institute (WPI) today announced its honored speakers for the 2017 Commencement ceremonies. Since 2016, the university has held two distinct exercises to celebrate the accomplishments of its undergraduate and graduate students.

Deborah Wince-Smith, president and CEO of the Council on Competitiveness, will deliver the graduate commencement address on Thursday, May 11. The Council consists of 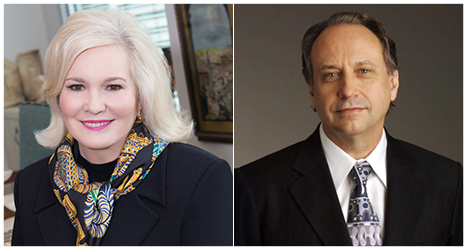 Rodney Brooks, chairman and CTO of Rethink Robotics, will deliver the undergraduate commencement address on Saturday, May 13. Rethink Robotics is a manufacturing company dedicated to making robotics more accessible, usable, and practical. The company is also known for its collaborative robots Baxter and Sawyer, both of which were designed to make manufacturing processes more automatic, affordable, and safe. Brooks also will receive an honorary doctor of science degree.

“Both Deborah Wince-Smith and Rodney Brooks have had remarkable careers through which they’ve played integral roles in advancing the collaboration and accessibility of technology across institutions, industries, and society, said WPI President Laurie Leshin. Each bring a wealth of experience and insight to share during a time of accelerated technological change. Their words will surely provide important perspective for our graduates as they set forth, ready to tackle whatever challenges face them to solve important problems and realize great success. I am thrilled to welcome them to campus.”

Since 2009, Wince-Smith has served as president of the Global Federation of Competitiveness Councils (GFCC), created in partnership with policymakers and stakeholders from over 30 competitiveness councils from around the world. She also serves as a corporate director and board member of national and international organizations, including the Purdue Strategic Research Advisory Council, the Commission on the Theft of American Intellectual Property, the Board of Directors of The American Associates of Japan’s prestigious Science and Technology in Society Forum, and the Prime Minister of Malaysia’s International Advisory Council.

Wince-Smith, who graduated from Vassar College with a bachelor of arts, and from King’s College at the University of Cambridge with a Master’s degree in classical archaeology, is an expert in technology commercialization serving as a Director of NanoMech, Inc., a leading innovator in industrial nanomaterials, and Aerolase, a company at the forefront of portable laser medical devices. Wince-Smith also serves on the Advisory Board of Delos Living, LLC.

Rodney Brooks has a long career as a leading expert in robotics technology. He was the founder, former board member, and CTO of iRobot Corporation, a global consumer robotics company that designs and builds robots to complete tasks inside and outside of the home. He is also the former director of the Massachusetts Institute of Technology Artificial Intelligence Laboratory, and the MIT Computer Science and Artificial Intelligence Laboratory.

For many years, Brooks served as a member of the International Scientific Advisory Group of National Information and Communication Technology Australia, and on the Global Innovation and Technology Advisory Council of John Deere & Co. He has been a member of the Visiting Committee on Advanced Technology at the National Institute of Standards and Technology since 2014, and an external member of GE's Robotics Advisory Council since 2015. Since January 2016, he has been deputy chairman of the Advisory Board of Toyota Research Institute. He is also a member of the National Academy of Engineering, a founding fellow of the Association for the Advancement of Artificial Intelligence, a fellow of the American Academy of Arts & Sciences, and a fellow of the American Association for the Advancement of Science, among other organizations.

Brooks graduated from Flinders University of South Australia with a degree in pure mathematics, and a PhD in computer science from Stanford University.

Honorary degrees will also be awarded to Donald K. Peterson ’71, former chairman and CEO of Avaya, Inc., and WPI trustee emeritus, and Audrey Carlan ’57, a mathematical physicist in optical computing, and the first female graduate from WPI's master’s program in physics.

Leshin noted the considerable accomplishments of both Peterson and Carlan and their engagement in the WPI community across the years. “Both individuals made their mark on the university as students, and have led careers of significant impact that will prove inspirational for our new graduates.”