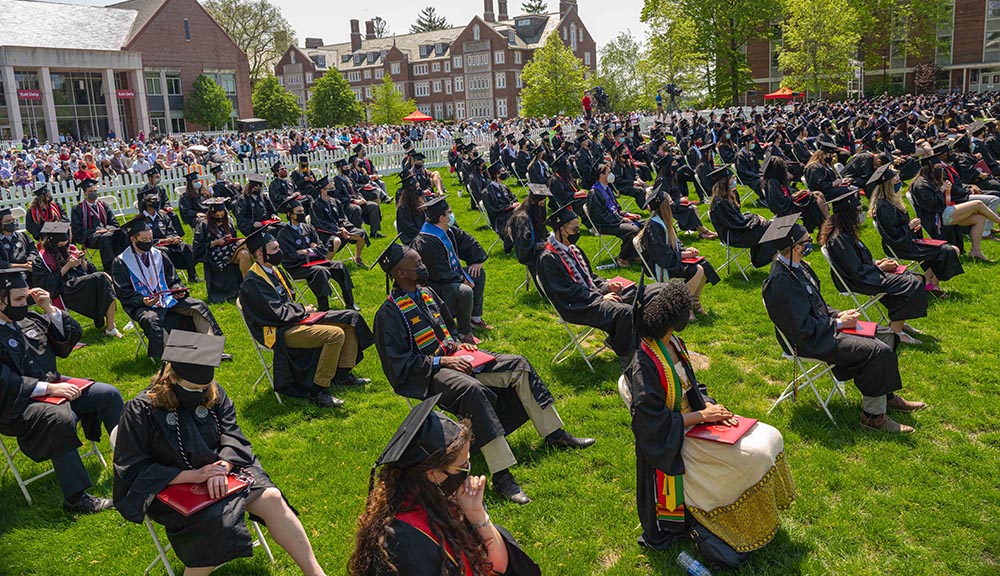 More than 1800 graduates were celebrated for their resilience, persistence, and excellence through the challenges of COVID-19 and throughout their years of study

Despite challenges posed by the COVID-19 pandemic, Worcester Polytechnic Institute (WPI) worked to create a series of smaller, more personal commencement events for the Class of 2021 and their families Gathered on the university’s campus quadrangle under picturesque skies on May 19, 20 and 21, President Laurie Leshin and members of the Board of Trustees presided over six in-person, socially-distanced Commencement exercises that were assembled by degree programs, departments, and schools.

Throughout the pandemic, WPI has held health and safety as the top priority, and this approach allowed each graduate to have two guests, while still following required social distancing and capacity guidelines. To accommodate those who could not attend in person, a live virtual event was held on Saturday, May 22. In total 1015 bachelor’s degrees, 742 master's degrees and 62 PhDs were awarded.

In her address to the graduates, President Leshin recognized the tremendous challenges of the past year while emphasizing the collective accomplishments throughout their time at WPI. “You have stretched yourselves as individuals and as scholars. You have overcome setbacks. And you have pushed the boundaries of knowledge in your field, but perhaps most significantly, you’ve persevered through a global pandemic – a once-in-a-century event - an event we’ve come through together. We will be forever bonded, not only because of what we came through this past year, but because of how we came through it.”

In lieu of an in person Commencement speaker, this year the Class of 2021 was surprised by video messages from two special guests: Massachusetts Lt. Governor Karyn Polito and renowned astrophysicist Neil deGrasse Tyson.

Lt. Governor Karyn Polito applauded the graduates for their hard work in and out of the classroom as well as the discipline and persistence shown during a year of unprecedented challenges. “On behalf of our entire commonwealth, I want you to know how proud we are of your accomplishments and how proud you should be too. As graduates of WPI, and especially as graduates in this difficult year, you are a group of resilient, brilliant problem solvers who are well prepared to create value and achieve your dreams wherever they may take you.”

Neil deGrasse Tyson, who received an honorary degree from WPI in 2007, encouraged graduates to be an inspiration to others. “Some part of your mission statement, your personal mission statement, I think needs to be how can you share your depth of knowledge and insight on the operations of nature and science and science discovery and what role it plays in the health and wealth of civilization itself and how can we become better shepherds of tomorrow, but understanding how and why things happen the way they do today.”

Despite the virtual and video components of this year’s ceremonies, several traditions remained in effect, such as the crossing of Earle Bridge on the campus and President Leshin’s now well-known NASA sendoff, “Class of 2021, you are go for launch! In 5-4-3-2-1 liftoff!!” Other long standing practices were modified--stopping to pat the Gompei (goat mascot) statue on the Quad, was not allowed due to health and safety precautions. Instead students and staff in the Innovation Studio’s rapid prototyping lab created a 3D-printed replica of the goat which graced the Commencement stage and was the centerpiece for photos.

Commencement 2021 also marked significant milestones for WPI’s efforts towards bringing more women into STEM fields. This year’s undergraduate class consisted of more than 40% female, and for the first time all student speakers for both the graduate and undergraduate ceremonies were women.

Several faculty members were also recognized during the exercises by Provost Wole Soboyejo for recent honors awarded by the Board of Trustees:

This summer the university will also host a series of Commencement celebrations for the Class of 2020. Event details are being finalized and more information will be released in the coming weeks. 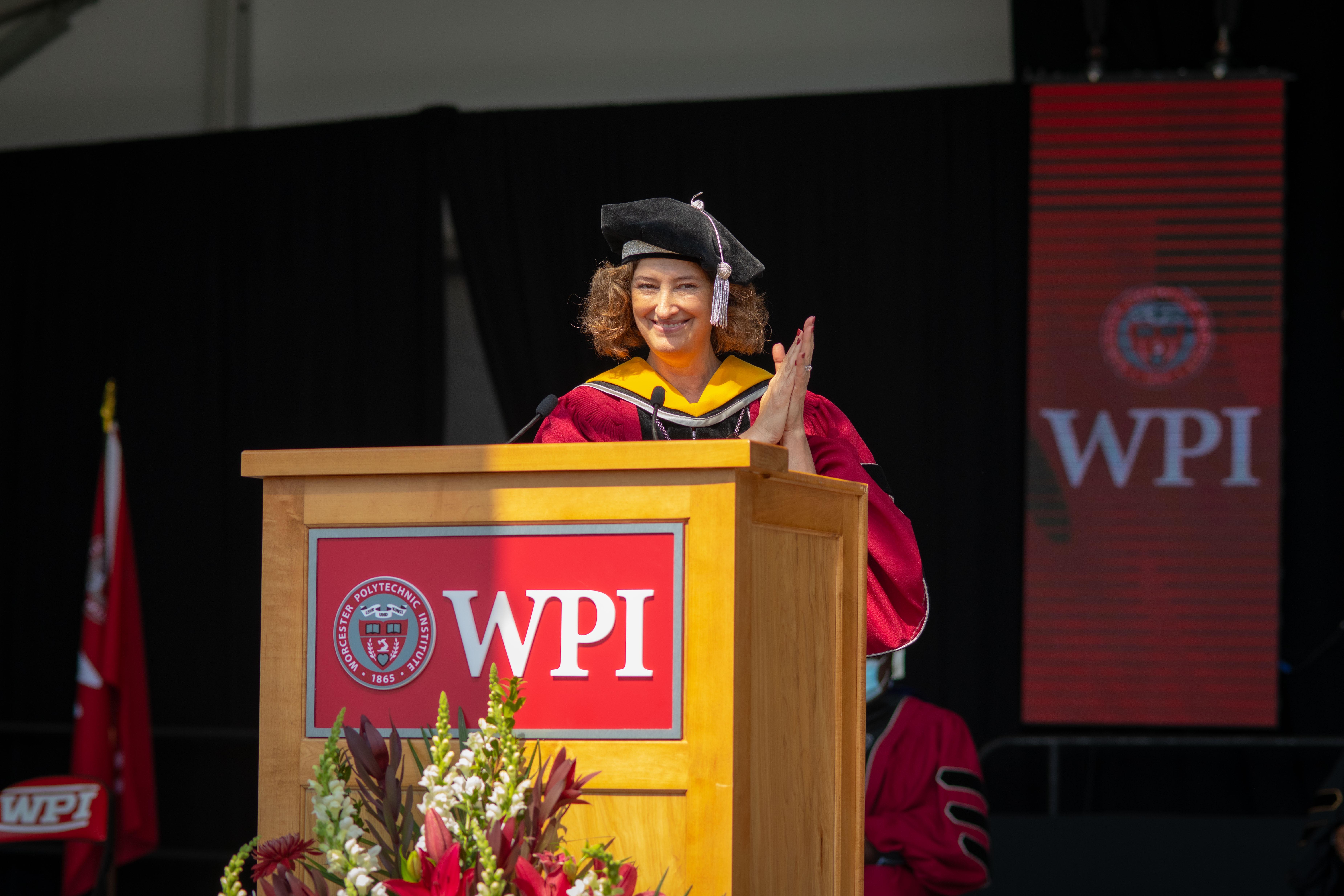 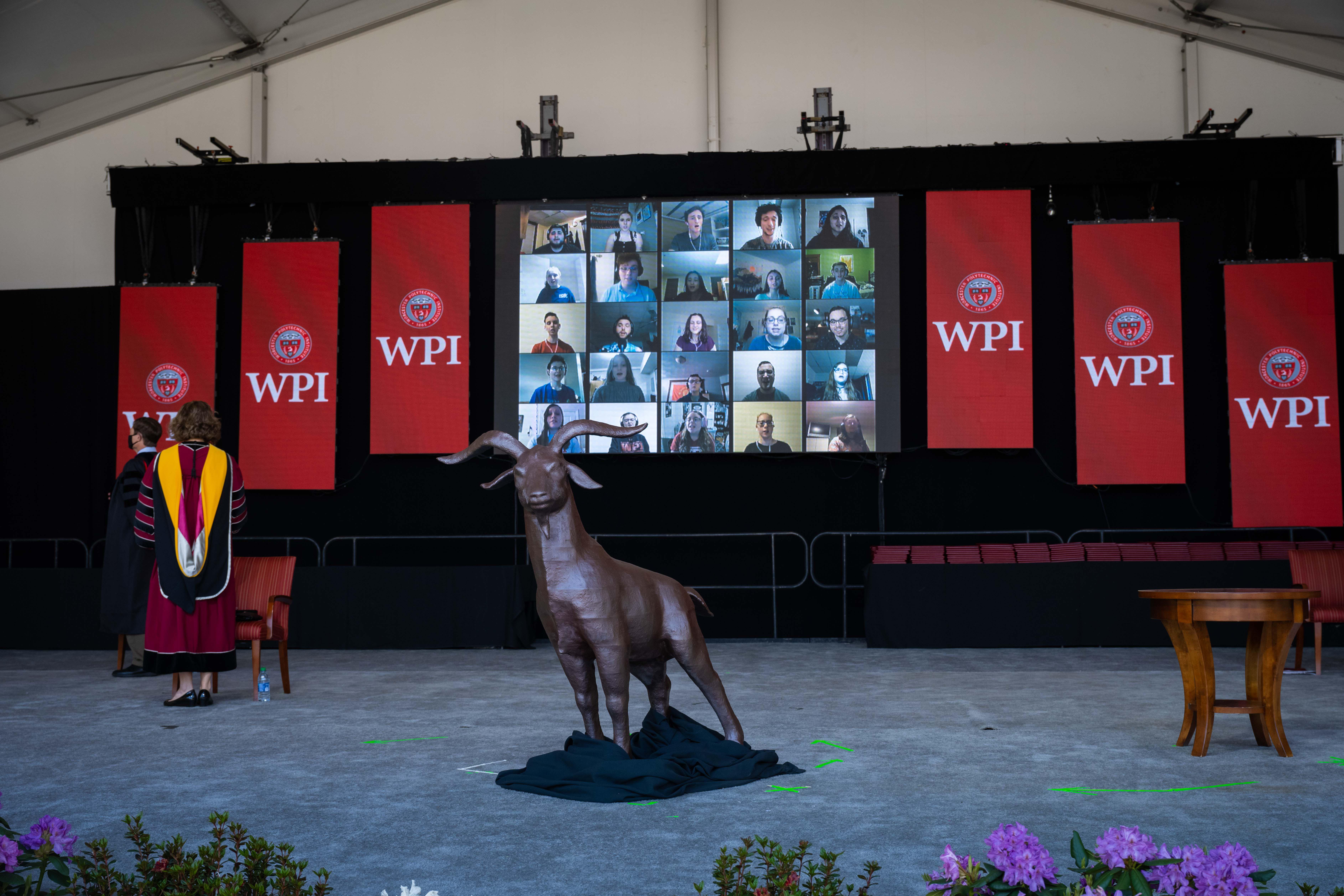 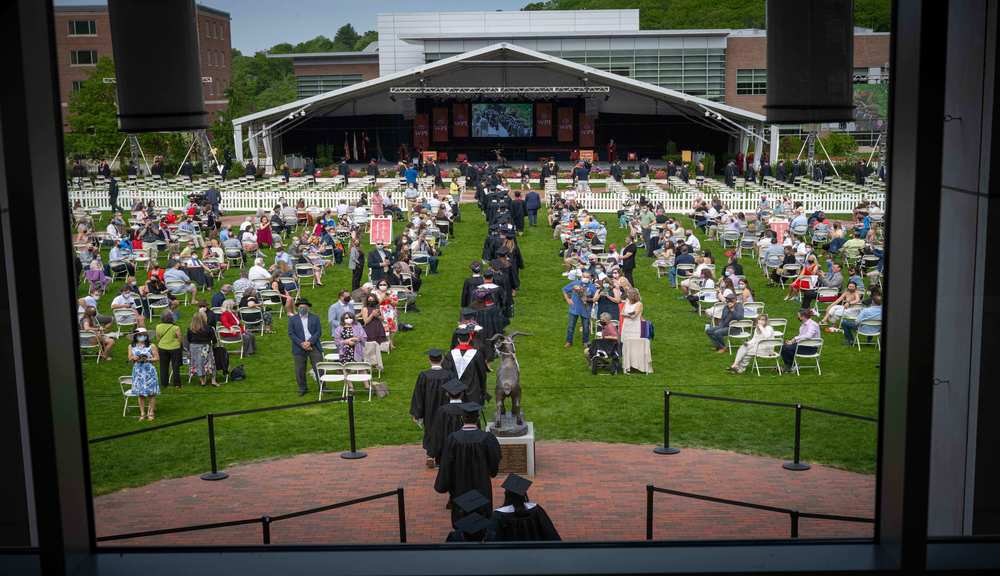 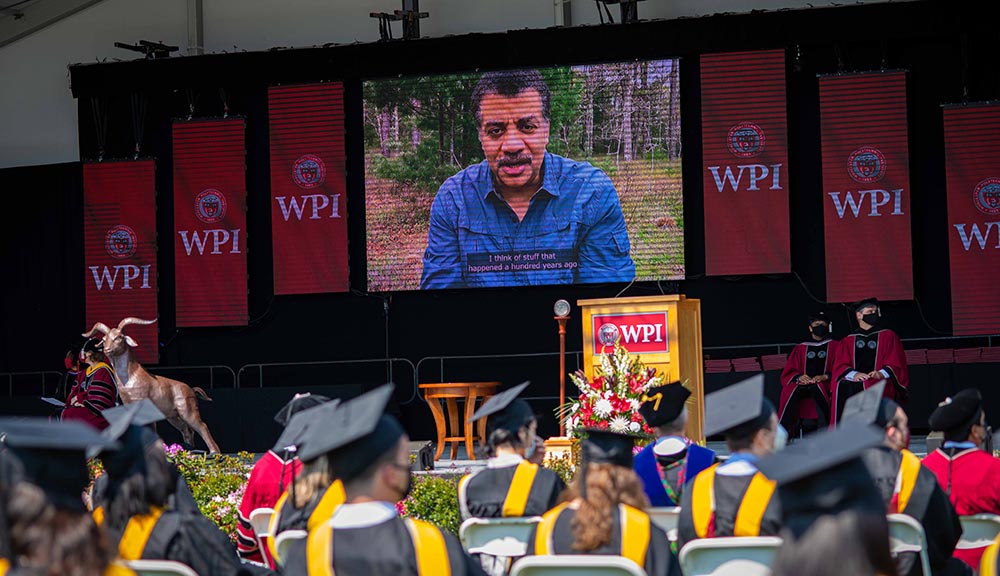 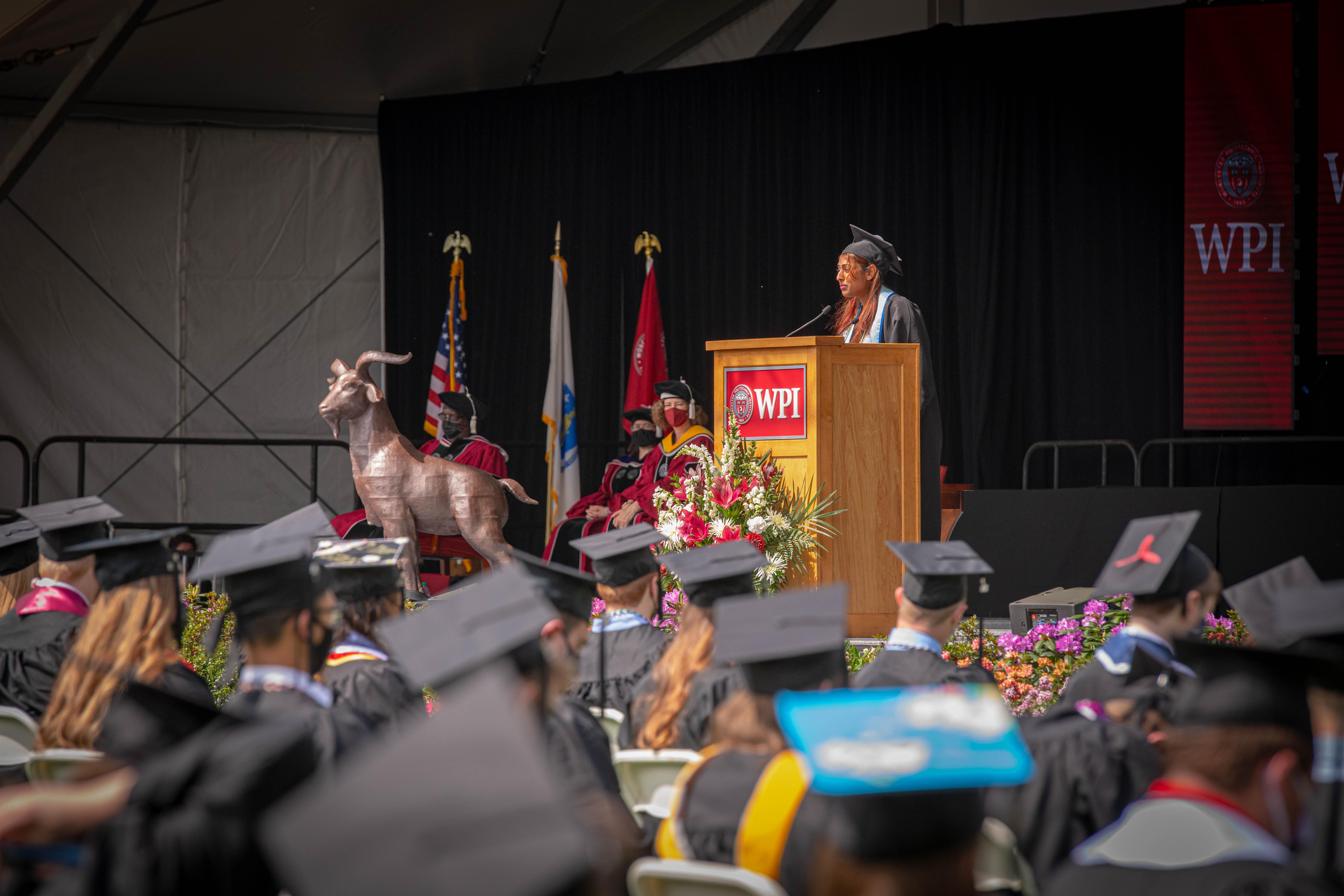 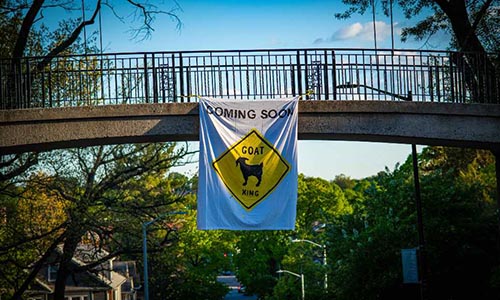 You’ve heard it time and again: what makes WPI special is the people, and the members of the Class of 2021 prove exactly that. Whether they’re going on to graduate school, a new job, military service, or something else entirely, the one thing they have in common is that they did it. They took a year full of uncertainty, constant changes, and upended plans, and faced it with grace, flexibility, and resilience. 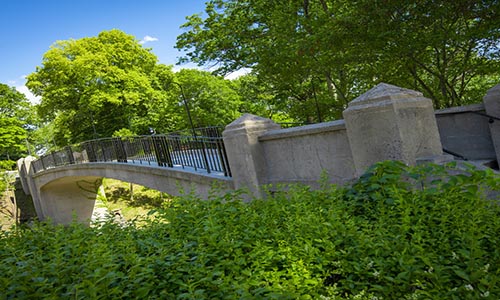 Faculty and Staff Reflect on the Class of 2021

Commencement 2021 celebrates graduates (many of whom shared some reflections of their own) who have persevered through a year that threw all kinds of challenges their way. Wth a world in upheaval, these graduates worked, studied, pivoted, pressed on, celebrated, mourned, and pushed through. The faculty and staff at WPI took notice of their grit, marveled at how they rose to the challenge, and lauded the way they came together to overcome the barriers that the past year put in their paths. Congratulations, Class of 2021!

Read the Story about Faculty and Staff Reflect on the Class of 2021
Visit the Commencement Website at: https://www.wpi.edu/news/annual-events/commencement