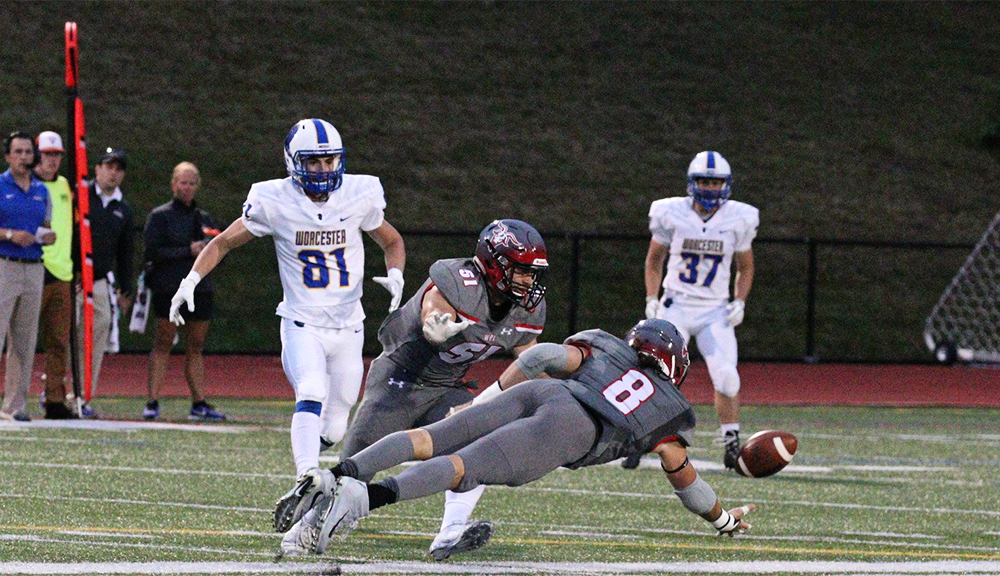 WPI Engineer and conference Defensive Athlete of The Year Sam Casey (#8) dives for the ball.

Real-World Experiences Readied Him To Be a Coach

Sam Casey '20 majored in management engineering and pictured himself getting a job in the construction field. It would be the normal course of things.

Casey, though, also was a standout football player with the WPI Engineers, and isn’t taking the expected path. He’s following his dream and has been tapped to be the defensive coordinator at Fitchburg State University. And in that job he’ll be using much of what he learned at WPI, both on the field and in the classroom. 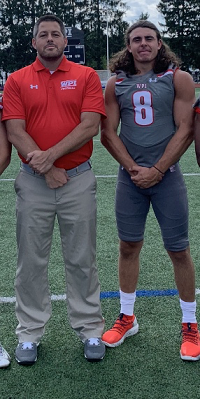 “I thought I had what I was going to be doing all figured out, but I knew deep down I still wanted to do something with football,” says Casey, a three-time all-conference player and, this year, conference Defensive Athlete of The Year. “I'd thought maybe I’d help out my high school football team—but then this opportunity came along, and I couldn’t envision myself doing anything else. Football is what I do.”

He will work with Scott Sperone, who was the defensive coordinator at WPI for three seasons before becoming the head football coach at Fitchburg last winter. Immediately upon taking the job, Sperone told Casey he wanted him to be his assistant and handle the team’s defense.

“I trust Sam and I know he’s going to work hard,” says Sperone. “He’s going to learn quickly and he’s going to be a great recruiter. He was an outstanding leader on the WPI team and led by example. He did everything he was supposed to do to be a better football player. Senior year he was captain and, at that point, two-time all-conference, and he was still sitting in the front of the meeting room taking notes like it was his first day of freshman year.

“I’m going to be able to teach him how to be a football coach like I hopefully influenced him in being a football player,” he says.

Casey said he may not be going to work in a STEM field but WPI still prepared him for his dream job. He credits both studying engineering and WPI’s project-based learning focus with preparing him to take on any job.

“I’ve always said football is my favorite class. Some people don’t realize how much meeting time and film study go into football. That, combined with the project-based learning offered at WPI, helped me to develop my critical thinking and leadership,” says Casey, who played strong safety for the Engineers and minored in industrial engineering. “Because WPI is so project-based, you’re always working in teams. You’re managing groups and holding others accountable. And football is the ultimate team sport. You’re working together to achieve a common goal that is far bigger than the individual. That’s the same in any business environment.”

Sperone, who says Fitchburg State’s program is in a rebuilding phase, is glad Casey is going to be working with him to make that happen.

“Sam is great at working in a group to come up with an end result,” he says. “That will correlate well with being a coach. There will be a lot of ideas being thrown on the table and he’ll have to work with other people to get the information he needs and set up a plan like he had to in his IQP and MQP. That’s what separates WPI from other schools. Real-world experience prepares you for being a football coach, a project manager, or an engineer.”

Casey, who started playing football in the third grade in his home town of Winchester, Mass., is expected to officially start his job at Fitchburg State this summer.