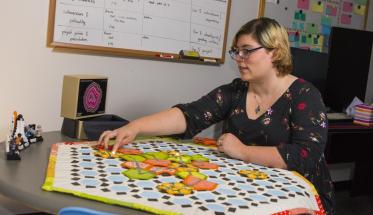 WPI Professor Finds Inspiration at Intersection of Gaming and Crafts

Gillian Smith mixes two interests to get deeper insight into both

One WPI professor finds her inspiration—and a new avenue to advance her own learning—at the intersection of her interests.

Gillian Smith, assistant professor of computer science at WPI, is combining two of her passions—gaming and crafts. It might sound like an odd combination, but it’s one that is expanding her view of both fields and helping her entwine the real and the virtual worlds. 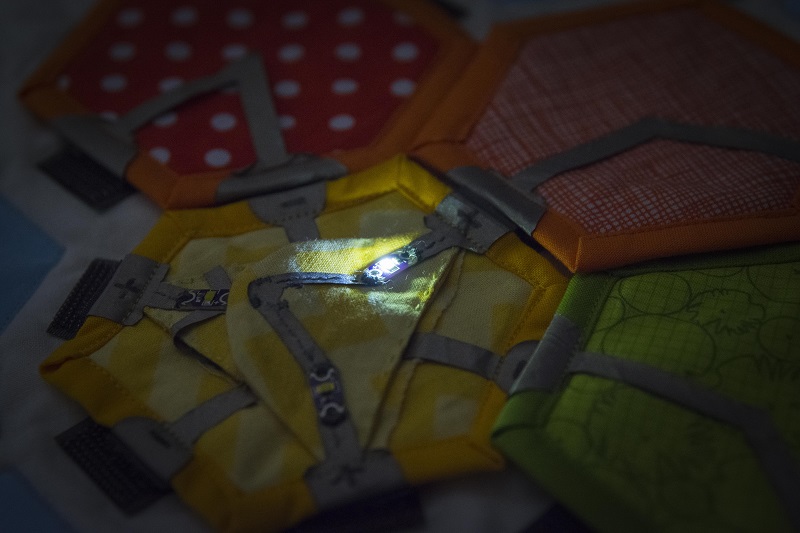 An LED light in Smith's work.

“It’s about new ways of creating craft and new ways of thinking about gaming and computer science,” says Smith, who is in her first year teaching at WPI. “It’s about a partnership between humans and machines in the art of creation. It’s also about how we can look at computer science and crafts differently by looking at them together.”

Smith, who did some jewelry beading when she was younger, turned to crafts to relax when she was doing postgraduate work and felt like she was spending so much time in front of a screen. Things like quilting and embroidery gave her a different kind of outlet.

Then she began to think about how she could mix her two interests together, so she began working on projects like building algorithms that use crowdsourced databases of color pallets and generate original embroidery patterns that she then uses to do her own stitching.

“I was suddenly making crafts that I never would have made without the software that created the designs,” she recalls. “The action of making the software pushed the boundaries of making the craft. The act of creating the craft—as I’m spending hours stitching it—has changed how I think about algorithms and code.

“It’s also opened up this research where we’re hoping to teach computer science through craft to people who already are crafters, and highlight the relationship between what they already know what to do and programming.”

Crafting, says Smith, could become a new entry point for people to become interested in computer science and digital gaming. It’s another way to draw in women, for instance, who might enjoy creating art but hadn’t considered technology.

“I feel like making things with your hands is compelling to people who do so much in digital spaces. I would like to see more people get into making physical things. At the same time, I’d like to see people rethink how they conceptualize computer science.” -Gillian Smith

Smith’s work has gone on to integrate research into artificial intelligence, gaming, and human computer interaction with art forms like embroidery and quilting.

In the game, players—working competitively or cooperatively—try to create as many circuits, turning on as many lights, as possible. Players receive points for the number of lights they can turn on.

While Smith has taught courses on artificial intelligence in gaming and interactive media, she’ll be teaching a class on games for social good in C-Term, and in 2018 she’s slated to teach a course on novel interfaces for games, which will use crafts. She’s also expected to teach a course on human-computer interaction, which will use gaming and crafting.

“I hope people see that this is about seeing things differently, and learning, and that it’s also super cool,” she says. “I feel like making things with your hands is compelling to people who do so much in digital spaces. I would like to see more people get into making physical things. At the same time, I’d like to see people rethink how they conceptualize computer science.”