More than 1,000 Undergraduates Take the Stage at 149th Commencement

The more than 1,000 undergraduates who were awarded bachelor’s degrees at WPI’s 149th Commencement on Saturday were advised by world-renowned roboticist Rodney Brooks to incorporate compassion, contribution, and community into their daily lives as they embark on their careers.

Brooks, the founder, chairman and CTO of Rethink Robotics, who was awarded an honorary doctor of science during the ceremony, warned the graduates against overestimating the short-term impact of artificial intelligence, robotics, and other disruptive technologies, and underestimating their longer-term effects on society. 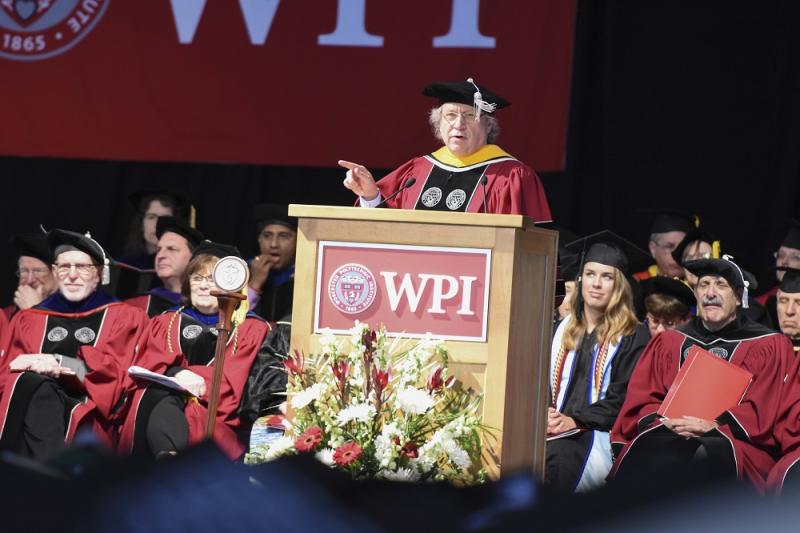 He recalled how in the Fifties and Sixties the first commercial computers started to come online, and by the early Seventies, about a dozen of them were networked together in what was then called the ARPANET, the early ancestor of today's Internet.

“There were predictions that computers would take away all office jobs within five or 10 years, and that networked computers in the Soviet Union and the United States would start talking to each other, decide that people were useless and let off nuclear arsenals to get rid of us all,” he said.

“These predictions were made on the basis of computers worthy of powering a birthday card.  … The expectations of what computers would be like and could do seem completely naive and quaint looked at with today's eyes.”

Brooks pointed out that no one in 1967 foresaw the supercomputer power that we commonly carry around in our cell phones, each more powerful than all the computers in the world combined from 50 years ago. “No one saw instant communication across the planet, with video, instant access to all the world's knowledge, news, and entertainment, and instant ability to purchase any item and have it delivered at home within 24 hours.”

In the near term, the jobs that technology erases will mostly be jobs that no one will miss, such as the Mass Pike toll takers whose jobs were automated, he said. Over a span of decades more and more traditional jobs will fall, but it won't be as earthshaking in the short run as many believe, but it probably will be in the long run, he said.

“So now, I want to turn to some advice for how you might live your lives as all this is happening around you,” said Brooks. “I want to focus on three nouns; compassion, contribution, and community.

“Have compassion for everyone around you and treat them as human beings. It will enrich your life and theirs. … There are many others in our country equally as capable as you, equally willing to work just as hard, but were not born into circumstances quite as good as yours—and I mean that for even those who had the longest, steepest climb to get here.” 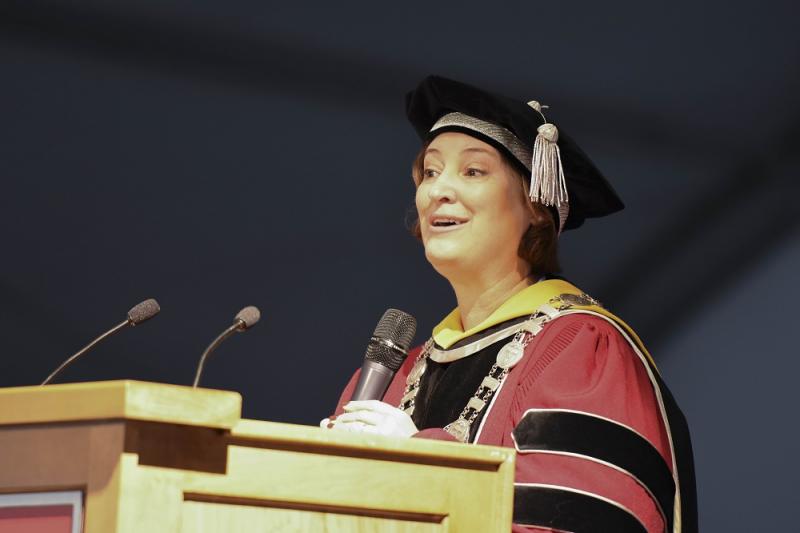 President Leshin congratulates graduates on all their
accomplishments.

He asked the graduates to consider how they are going to contribute to the world—what they will do to make the world a better place, and why people would appreciate them for it. “Perhaps you will become a mentor to a FIRST Robotics team, and help kids see how they can be fulfilled by STEM,” he said. “Or perhaps you will write great poetry, or plays, and contribute to everyone's spiritual well-being.

“My point here is that there are lots of ways to contribute to the world. And when you contribute, you will be rewarded by gratitude from those whose lives you help.”

Brooks reminded the grads that they have had a strong self-contained community at WPI for the last four years that has helped them through hard days. “But now you head off in many different directions and though you might keep up with some of your friends, it will not be as strong a community as it has been.

He said that having a community will pay them back in forms of support and happiness. “It is really, really important. Don't scrimp on community,” he said.

In presiding over the ceremony, President Laurie Leshin pointed out that it had been an outstanding year at WPI—full of individual accomplishments, and remarkable progress for the university as a whole.

“But none of those accomplishments—not even being ranked number one in the nation by the Wall Street Journal for being the university that best integrates great teaching with great research—not even this number one ranking is more important than the accomplishments we celebrate here today,” Leshin said, to loud cheering.

“So today we celebrate you all," she continued. "All you’ve done. The roads you’ve traveled. The impact you’ve made in communities around the world. How your WPI experience has made you the person you are today—and contributes to who you will be in 10, 20, 30 years from now and beyond.”

Leshin told the stories of Paige Myatt and Antoine Crews, who, in their junior years did IQPs in New Zealand and Worcester, respectively. Myatt’s project worked with the indigenous Maori to assist in the growing of hydroponic crops, while Crews’s aided the Worcester Roots Project in the development of an aquaponic greenhouse and to study which fresh produce would be feasible for an urban farming movement. 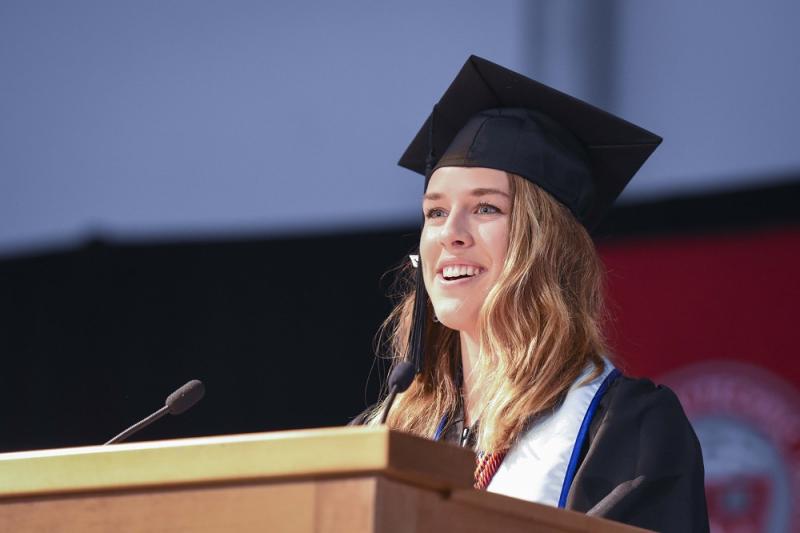 “Paige and Antoine, who know each other from their work as resident advisors, connected the dots on the similarities of their global projects.  They appreciate—as I believe all our graduates come to appreciate—that on this small planet of ours, the problems communities face and the importance of collaboration to solve them is universal.”

Crews plans to go back to his hometown of Detroit to build a business and create jobs, while Myatt is going to continue her education focused on international development, taking her engineering mindset and applying it to make a societal impact.

“And so, as you graduate today, I leave you with two requests," Leshin said. "First, I challenge you to focus on the opportunities ahead, yes, but to not overlook the responsibilities ahead. With this education and your capabilities, we know you will do well in your career, and do well for your families. My charge to you, Class of 2017, is to also be sure to do good...

“For your community, for your nation, for the planet. … Your WPI education has prepared you to make an impact on a much broader stage and so, apply what you have learned here for good. In other words, use your WPI degree to continue to make us proud.”

She said that she and her classmates took a leap of faith in enrolling at WPI, unsure of what the future would hold.

“The spirit of WPI is captured in this: prevailing through uncertainty, approaching each encounter with an open heart and an open mind, knowing that everyone is here for a reason, and understanding that everyone has something to offer.”

“We are in a unique place at WPI. Some may call it a bubble, but what a bubble it is!” Delaney said. “To be among the brightest minds, conquering the toughest subjects—not just in the field of engineering or science—but in society. WPI proves time and time again to be at the helm of progress. 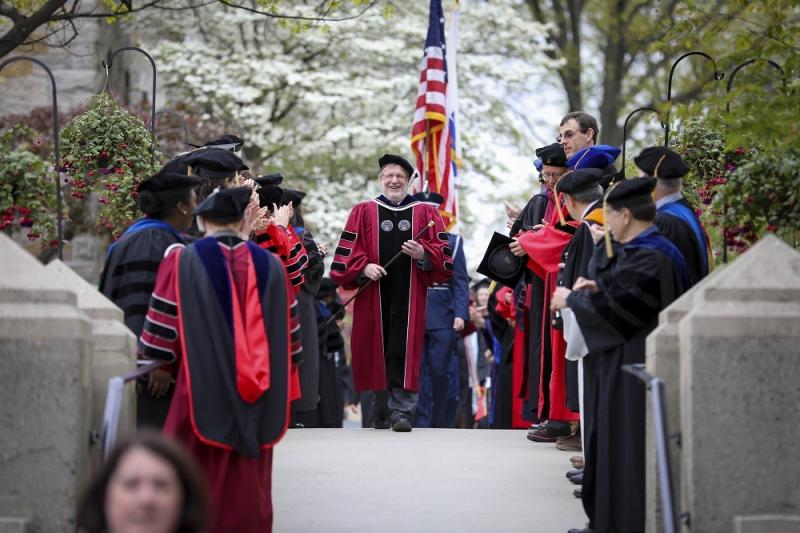 “Theory and Practice have been ingrained into our very being, knowing that theory or practice on their own are not as effective as when they are together.”

During the ceremony Leshin and board chair Jack Mollen conferred honorary doctorates upon Brooks and Donald K. Peterson ’71. After earning a BS in mechanical engineering at WPI, Peterson worked as a senior analyst at State Mutual Life Assurance Company in Worcester before embarking on a telecommunications career distinguished by impressive achievements and critical moments of decisive, visionary leadership.

Peterson used his skills to support and advance his alma mater as a longtime member of the WPI Board of Trustees and as chair from 2005 to 2010. In 2007 he established the Chairman’s Exemplary Faculty Prize. In 2008 he and his wife, Maureen, endowed the Peterson Family Professorship in the Life Sciences and Bioengineering, supporting the university’s founding principle that science and technology should contribute to the betterment of society. Since 2010 the professorship has been awarded to the Peterson Family Dean of Arts and Sciences.

Professor Diane Strong of the Foisie Business School was recognized as winner of the 2017 Chairman’s Prize, and Professor Stephen Kmiotek of the Department of Chemical Engineering was presented the WPI Trustees’ Award for Outstanding Teaching. As the recipient, he served as the Honorary Marshal for the Commencement exercises.

Austin Higgins and Kelly Slabinksi presented the Class Gift, a check in the amount of $22,000, which was the culmination of 519 gifts totaling 55 percent participation from the class of 2017.

After the ceremony some of the graduates talked of their plans and how they will remember their time at WPI. Brendan Kling credits his experiences at WPI and his off-campus IQP in Cape Town, South Africa, for his professional growth and a more expansive world view. The civil engineering major is already working at Grady Consulting, an engineering firm in Kingston, Mass., and plans to obtain his professional engineer license.

“It’s a place that gave me more opportunities than I would have expected,” Kling said. “It got me to break out of my comfort zone, particularly when we went off campus. I just realized a year after going [to South Africa] what a great experience it was. It gave me a whole new perspective on world difficulties and the challenges people face. IQP is the thing I’ll remember most, but the whole package, I guess ... the classes, the projects all coming together—pretty nice.” 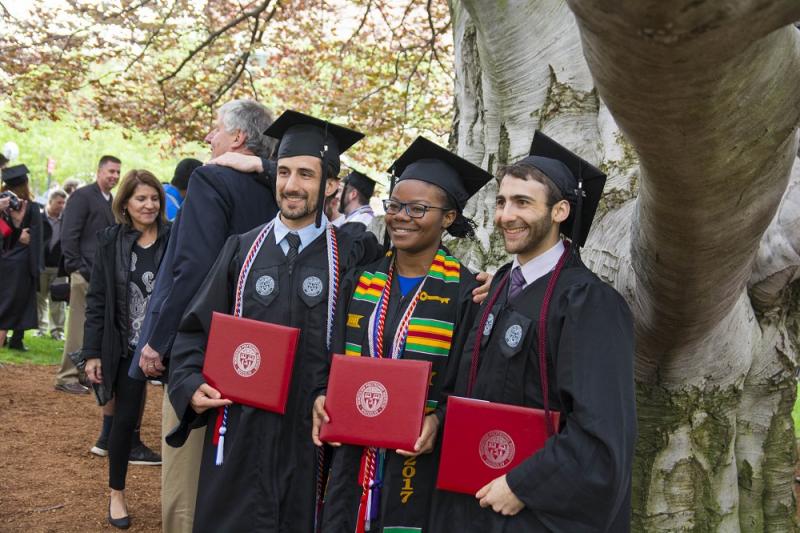 Graduates pose for photos under the beech tree.

Briana Rodriguez majored in biomedical engineering, and is looking for a full-time job. “My dream job would be in medical device quality assurance. That’s what I’m striving for,” she said. “I feel that I’ve grown so much over the last four years here with my peers and the faculty. I wouldn’t be the same person today if I had been at another institution.”

Air Force 2nd lieutenants Brittany Kyer and Jarrod Peloquin had been ROTC cadets together and will be married next month. Kyer said she will report to Tindall Air Force Base in Florida next year as a civil engineer officer. “I’ll definitely miss it. I love this campus, especially in spring,” she said. “I loved the classes I took here. I took a lot of materials classes. I really enjoyed my senior year because of that. It was hard, but it was really good.”

Peloquin, who majored in mechanical engineering, will report to Pensacola Naval Air Station later this year to train as an aircraft combat systems operator. “It was a tough one,” he said of the WPI regimen.” A lot of tough courses, a lot of challenges along the way. I thought these courses really prepared me for when I get into the real world. The ROTC program here was great. It helped me develop, not only as an airman, but as a human. They’ve helped me grow up a bit. This campus is the best environment to have for college.”

Robert Howard Fleming, an electrical and computer engineer, said that following a trip to Hong Kong, he will begin job hunting, and hopefully get a job in the Manhattan area.

“I think I’ll remember WPI fondly and a lot of the people I met here,” he said, “... my brothers from Alpha Chi Rho. I’ve changed a lot as an individual, become more outgoing, more self assured. I see myself taking bigger chances and trying for higher goals. This place has really helped.”