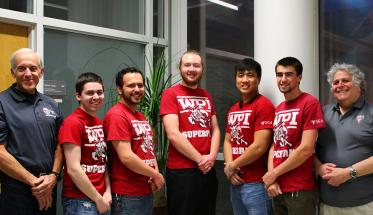 The team of five recent graduates and two advisors spent the week at the NASA-sponsored event in which teams answer the challenge to build robots that could potentially collect and transport soil and ice samples on the surface of Mars. Their robot, Markhor (named after a mountain goat, in true WPI style), was the culmination of their nearly year-long MQP (Major Qualifying Project).

When they began, none envisioned this final adventure, but all say it’s a fitting and satisfying end to their WPI careers. According to team advisor, Mike Ciaraldi, the Regolith Mechanics Award is given based on a number of factors. Winners are noted for “the best example of a real granular innovation that identified a specific regolith mechanics problem (like the way the soil flows around the grousers, or angle of repose too high in their dump bucket, etc.) and intentionally improved their design to deal with it.” 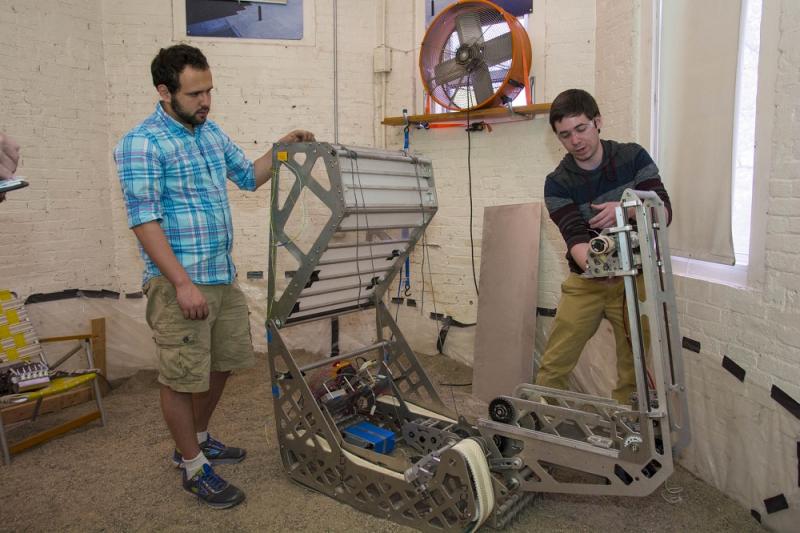 Aaron Jaeger (left) and Domenic Bozzuto with their robot,
Markhor.

Team members, all 2017 graduates, are Domenic Bozzuto, Rene Jacques, Aaron Jaeger, Brian Peterson, and Jason Wu. They and advisors Ciaraldi and Ken Stafford joined nearly 50 other teams from across the country at the competition. Unlike members of many other teams who often compete in the Robotic Mining Competition as a club and bring robots they have been working on for years, none of these WPI students had ever been to the competition and Markhor is a brand-new robot they built from scratch over the past nine months.

“The whole experience was almost surreal,” says team lead Bozzuto. “This is a really great way to celebrate our MQP being done. And our end goal has value.” In addition to the competition, the team had chats with NASA personnel, SpaceX employees, and tours of the facilities.

All team members recalled a sense of awe when they walked into the Kennedy Space Center and saw rockets from previous space trips set up. “It was really cool,” says Jaeger, who will spend the summer as a leader at Merrowvista Camp in New Hampshire before his own liftoff into the working world. “We walked through the gates and saw all the old rockets on display. You got a feel for how big a deal [the competition] really is.” While the experience would be awesome for any typical visitor, Bozzuto says it made even more of an impact for the team of engineers.

The competitions were live-streamed, so fans and supporters could watch each nail-biting minute of the activity. While some team members directed their robots from a central control room, others were on the floor watching the robots from the sidelines. After months of building and fine tuning the robot, the hands-off aspect of the competition showed the real details that made the team so successful. “It was pretty weird,” says Bozzuto, of operating the robot from the control room. “We pretty much had the same experience the viewers were having. We had about five minutes to interact with it, and the only way to monitor it is by what we built into the robot.”

Of the two runs the team made, the first one allowed them to gain 11 kg of materials, eliciting cheers from the audience. A technical glitch made the second run less effective, but the determined team kept going and was still able to mine some material. Many other teams were unable to mine any amount or, if they did, they were unable to deliver it to the collection areas. Unlike the sand and rocks the team used in practice mining runs in Worcester, the competition’s mining environment consisted of BP-1, a denser and finer material made of crushed basalt that simulates Martian-like regolith.

With a focus on the robot, Wu, who plans a software career, says the real proof of the team actually came when the robot didn’t work as expected. “It’s about never giving up,” he says. “The teamwork is in getting it to come together.”

“What I saw was WPI at its best. A passionate team, good natured, and who function tightly as a team. The most critical thing is the team chemistry. It’s not what they design, but how they function as a team. This was a really wonderful, wholesome experience. It’s why I love WPI.” -Ken Stafford

Despite the intense competition, team members say the atmosphere was one of support and camaraderie. Jacques says the specific setup of this competition allows for lots of interaction among teams, but that the robotics community in general shows great respect for each other. “The robots don’t interact with each other, so there’s no ‘You broke my robot,’ animosity,” he says. “And I love this robot, although it didn’t get to show its full potential.”

The common passion for robots leads to lots of openness, he says. Peterson agrees. “Everyone has a completely different approach to each problem,” he says. “That’s pretty cool.”

Jaeger says the robotics community tends to be friendly. “People who build robots tend to be nice people,” he says. “You share your struggles and hear how they take apart their robots and assemble the robots.” In fact, the team relayed several stories of teams sharing equipment and parts when needed—an announcement would broadcast the need and it was generally filled almost instantly by another team.

Other teams welcome questions, and the WPI team found themselves answering lots of inquiries about their innovative collector with scoops mechanism. “The mechanism has been getting a lot of attention,” says Jacques, who will spend two months this summer as an engineering volunteer in Liberia. Many teams spend time reading up on the other robots before the competition begins and, he says, their approach—in which the collector system has two carriages that move perpendicular to each other so it can move faster and have a consistent dump height—was something new. 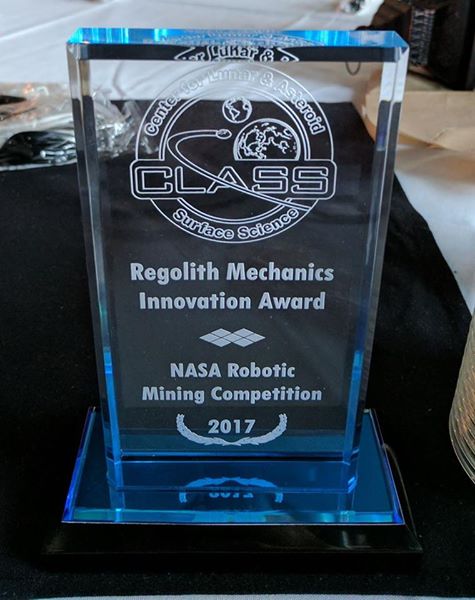 “The sequence is unique,” says Peterson. “Other teams wanted to see how it worked.”

Ciaraldi notes the attention was certainly a point of pride. “Everyone was impressed by our design and features,” he says.

Jacques says the team worked on that collection system at length, watching videos and spending the first two terms of the year researching, prototyping, designing, and performing endless calculations.

The problem that arose at the competition was that the scoops used to dig and move the material kept jamming. With the finer material, the robot’s mechanisms got stuck. But team members said the unexpected hiccup might have prevented a higher placement, but it didn’t discourage them. “We had to adapt a little,” says Jaeger, “but we drove the robot amazingly.” Taking the broad view, the team knew the robot could mine and move a lot of material because they had done it at WPI. “We had proof that it worked,” says Bozzuto.

Team members all commented on the closeness and friendships among themselves and how that contributed greatly to the trust and the ability to communicate on such a complex project. “We are good friends,” says Peterson, who starts an engineering job in June. “Some teams had drama. We didn’t have any of that.”

Ciaraldi and Stafford said the experience was fantastic for them as well, and they had nothing but high praise for the team. “I was impressed,” says Ciaraldi. “This has really been one of the best MQP teams. They are dedicated and have great ideas.” And they roll with what comes their way, he says, even adapting to load MARKHOR into an SUV for the drive down to Florida and toting the 78-kilogram robot between the competition space and their rented house at night in Florida so they could continue to work on it in off-competition hours.

“What I saw was WPI at its best,” says Stafford. “A passionate team, good natured, and who function tightly as a team. The most critical thing is the team chemistry. It’s not what they design, but how they function as a team. This was a really wonderful, wholesome experience. It’s why I love WPI.”

As the team moves onto postgraduate life, each plans to take a different path. And while they are thrilled with the experience they had, they know the future holds just as much potential. Says Jaeger, “I am just excited for what’s next!”