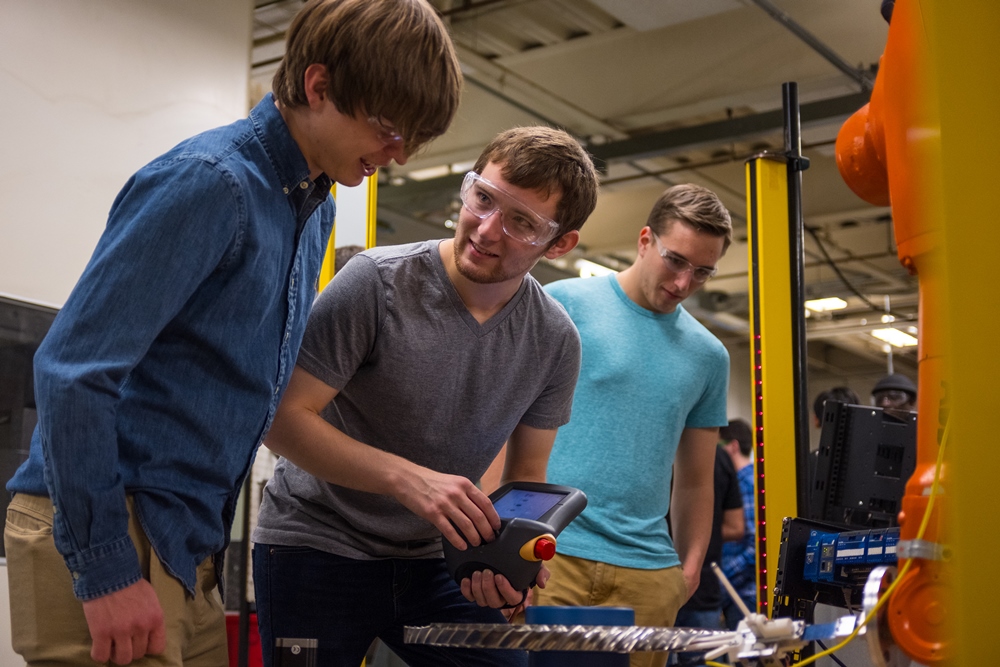 Three teams of undergraduate researchers have worked on the project, which could allow GE to inspect critical components with greater accuracy and less physical stress on human workers

Students at Worcester Polytechnic Institute (WPI) are completing a three-year project that could help GE Aviation use robotics to inspect a critical component of jet engines with greater accuracy and less physical stress on human workers.

A team of three undergraduates, the third team to work on the project, is completing the hardware and software needed to enable a robot to inspect jet engine parts known as blisks (from bladed disks), which are compressor blades and rotor disks made as a single part. Critical components for the engines that power the Airbus A320neo family and the Boeing 737MAX aircraft series, blisks need to be flawless, since a failure could cause an engine to shut down during flight.

“It’s important for the blisk to be perfect,” said senior instructor Craig Putnam, associate director of WPI’s Robotics Engineering program and an advisor on the GE Aviation blisk research project. “This is the spinning part of a jet engine, so it’s subject to huge forces. If the blisk isn’t machined properly, it could destroy the engine.”

Kenneth Stafford, a teaching professor in the Office of Undergraduate Studies and the director of WPI’s Robotics Resource Center, is co-advisor for this year’s project team: seniors Michael Hopkins, Kevin Macintosh, and Nicholas Hollan; Hopkins is a robotics engineering major; Macintosh and Hollan are majoring in computer science.

Like the two teams before them, Hopkins, Macintosh, and Hollan are completing their Major Qualifying Project (MQP), a team-based, professional-level design or research experience that every WPI student must complete. William Moore and Matthew Shanck, members of the Class of 2015, began the blisk inspection work in an MQP advised by Putnam, Stafford, and Susan Jarvis, assistant teaching professor in electrical and computer engineering. Breanne Happell, Karen Orton, Kevin Ouellette, and Charles Sinkler, all members of the Class of 2017, continued the effort last year with an MQP advised by Putnam, Stafford, and Michael Gennert, professor of computer science and former director of the Robotics Engineering Program.

A GE facility in Hooksett, N.H., which has been sponsoring the three-year project, expects to ramp up to 90 blisk inspections a week during peak times, so making those inspections easier, faster, and more accurate has been a key goal for the WPI student project teams.

Currently, GE Aviation workers inspect each blisk by hand, a process that can take one to two hours and can lead to repetitive motion injuries, like carpal tunnel syndrome. The inspections, which are a quality control check, focus on the fillet, a curved piece of metal that sits between the blades where they attach to the disk. The fillet, which makes the blade stronger, must have a specific radius and be free of gouges and bumps.

The WPI research team has been tasked with programming a robot to accurately inspect a blisk in the same time it takes a human worker; eventually, GE hopes to have robots do the work even faster. A human inspector would double-check any potential problems identified by the robot, cutting the time humans spent on inspections, according to John Graham, a manufacturing engineering manager at GE Aviation in Hooksett.

“It’s about humans working with and being aided by robots,” Graham said. “It’s not about robots replacing humans. The more automation we can bring to the manufacturing plant, the more work we can do with the same number of people.”

Currently, GE Aviation does not use robotics for blisk inspections, though robots are used to polish and smooth rough edges of the blisks. Graham said he hopes that adding robotic inspectors will not only increase productivity, but bring greater consistency to blisk inspections. Where people tend to have some variation in their judgement, robots will not, which will give managers more confidence in their results.

The WPI students have designed a turntable that will hold the blisk and rotate it so a robot can inspect each blade individually. They are also building an inspection tool that attaches to the arm of an existing robot and includes a ball with a camera about the size of a pencil eraser on one side and an LED light source on the other.

The tool inserts the ball between two blades and drags it along the fillet, from the edge of one blade to the edge of the next. As the ball moves, the camera records how light passes around the ball. Too much or too little reaching the camera may indicate an anomaly, such as an incorrectly machined fillet. If an anomaly is detected, the system would alert a human inspector.

In addition to designing the hardware, the students are writing the software for the computer vision system and the robot controller. One of the biggest challenges the students have faced is designing the end-of-arm tooling so it can fit properly in between the blades and move the ball in a precise line along the fillet, Putnam said.

Graham said GE Aviation will evaluate the hardware and software developed by the WPI project teams and, if the work is “mature enough,” it will go to GE’s own robotics team where it will be readied for use in an industrial setting. “There was no expectation that WPI would deliver an industrial solution we could immediately put on the shop floor,” he said. “But if they prove that something would work, then it would increase the likelihood of us industrializing it. We think of WPI as an incubator.”

The WPI student team has been working on blisks in a range of sizes and designs, all of which are specific to the needs of the Hooksett facility. But Graham said their work could easily be adapted for use in other GE facilities, as well as by suppliers that manufacture blisks for GE.

By the end of the three-year project, the nine WPI students will have put in about 3,000 hours of work on the project, according to Stafford. “GE is getting some good engineering work,” he said. “The project gives students great insights about industry. Whenever we can get a company that believes we can assist them, it’s a win for students, the faculty, and the company.”

“It’s applied robotics,” said Putnam. “We’re trying to make industry more efficient all the time and this is an example of how we can get it done. This is a typical industrial quality control kind of problem. Something that looks easy for a person to do is actually quite difficult for a robot. The students certainly are learning how challenging real-life problems are.”