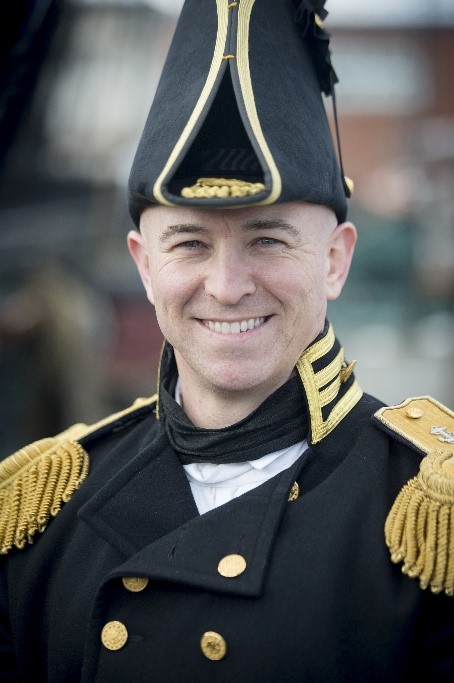 Commander Benda'01 (BS, ME) was commissioned as an Ensign through the College of the Holy Cross NROTC program in 2001.

His initial sea assignment was onboard USS ASHLAND (LSD 48) as Comms Officer. ASHLAND deployed with ATF East in January 2003 in support of OPERATION IRAQI FREEDOM. On this deployment CDR Benda earned his Officer of the Deck and SWO qualifications. His next assignment was to Amphibious Squadron Seven as Assistant Ops Officer embarked on USS BONHOMME RICHARD (LHD 6), which participated in Unified Assistance, a humanitarian effort delivering vital relief supplies in the wake of a tsunami that struck South East Asia. During this deployment, his other duties were as primary liaison between the Kuwaiti Navy and ESG Five while ashore at Camp Patriot, Kuwait Naval Base.

CDR Benda’s first shore tour was to Afloat Training Group Pacific as a Training Liaison Officer.  After taking several ships through the Unit Level Training Cycle, he was chosen as an individual augment to Joint Task Force 515 Forward as Operations Officer onboard USNS FRED W. STOCKHAM in support of OPERATION ENDURING FREEDOM.  After returning, CDR Benda was afforded the opportunity to achieve a Master’s Degree in Global Leadership from the University of San Diego.

CDR Benda served his first department head tour aboard USS GARY (FFG 51) from April 2009 until June 2010 where he deployed to the SOUTHCOM AOR and conducted counter narcotics operations.  He was recognized for his efforts by being selected as the Commander Naval Surface Forces Leadership Award recipient.  From July 2010 until December 2011 he served as Operations Officer for Amphibious Squadron One, deploying again to the 5th Fleet Area of Responsibility embarked on USS BOXER (LHD 4) in support of theater security operations and national tasking.

He is a February 2013 graduate of the Naval War College, and recently completed a 2 year shore tour as instructor and module lead for Expeditionary Warfare at Surface Warfare Officer School in Newport, RI. His last sea tour was onboard USS ESSEX (LHD 2) where he served as Damage Control Assistant.

This program is hosted by WPI Tech Old Timers, and is open to all members of the WPI community for their enjoyment.