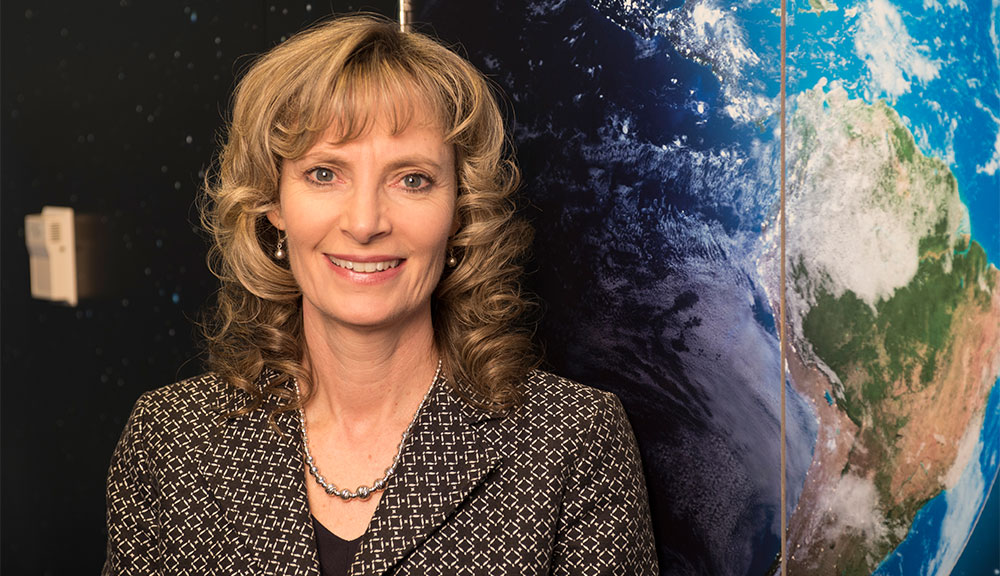 A Career in Balance

Gail Baker has traveled the world, hobnobbed with dignitaries, and succeeded in what was once a man’s world. But what she prizes most is family. WPI ended up helping with both: she met her husband, Ray Baker ’85, when she joined the rugby team “on a whim.”

“I’m of average height and small frame, yet I played rugby at WPI and was captain of the women’s team for two years,” she says.  “That tidbit usually surprises people…. Joining the rugby team was something I did to try to meet people—and as it turned out, I have maintained some of those friendships to this day.” Gail and Ray have three thriving children, ranging in age from 17 to 22.

Baker serves as senior vice president of engine and environmental control systems, one of eight business units within UTC Aerospace Systems (UTAS), a $14.3-billion aerospace components supplier. UTAS is part of United Technologies Corp. (UTC), a $57B international conglomerate, and she’s considered one of UTC’s top 100 executives. She graduated just a dozen years after the university sent its first female undergraduates out into the world, and while she has experienced some sexism, in part she made her own luck.

“I wouldn’t say I had to fight my way to the top,” Baker says, “but instead worked hard and hoped that my work ethic would be noticed—and it was.” She adds, “That’s not to say I didn’t have my challenges along the way. There are difficult people in every industry, and a woman in engineering is still an oddity for some.”

Baker is quick to say, “Overall, I’ve been given more opportunities than I ever dreamed about.” Whether these breaks were given or hard won is a matter of speculation. “Mostly, I’ve refused to be deterred by people who think I don’t belong, and instead have worked to prove them wrong.”

Early in her career, a customer proudly showed off an embroidered pig on his jeans. “He was a male chauvinist and wanted everyone to know. Imagine how I felt in my early twenties sitting across from this guy. But I wouldn’t let him derail me and we ended up having a very productive working relationship.”

Then there was the time a manager requested estimates on the cost of producing a structural frame for a subsystem then under development. “It was a complicated part that required several machining operations to meet final specifications. A woman in our manufacturing group came up with the estimate. When we presented it, the manager said, ‘what does she know about estimating the cost of this part? I’m sure if I wanted to know the price of a bottle of shampoo, I could ask her.’ Needless to say, this was a tough guy to work with—but some might say I have a stubborn streak. I would not walk away. After a lot of hard work and some really difficult encounters, I eventually won him over, and he presented me with a Special Recognition Award when the project wrapped up.”

Working in a traditionally male environment, however, presented one indisputably uncharted challenge: “There were very few women engineers at Hamilton Standard [which in 1999 became Hamilton Sundstrand and, later, with the acquisition of Goodrich Corp., UTC Aerospace Systems] when I started my career, so it was difficult to know what to do [about balancing work and family] when I had my first baby.”

Baker engineered a solution, extending her time off and returning to work roughly 30 hours a week. (As business needs arose, she transitioned between part-time and full-time over the course of having three children, and eventually returned to work full-time.) Her boss, she says, “realized that I needed some flexibility in the short term in order to continue with my career. He had three kids and knew that it’s difficult to balance a demanding career and a family.”

The company’s foresight paid off. “Because he gave me that flexibility, I made sure to show my ‘value-add,’ and worked more when the job required it. I wanted the company to feel they were getting a good deal, as I was most appreciative of this arrangement.” Now, she says, she advises young female engineers that “there’s no right solution for everyone, you just have to find the right balance for you.”

That spirit of determination, cooperation, and balance has helped her—and her company—soar: “About three years ago, I was involved in an intense negotiation to win new business on the Embraer E2 aircraft,” Baker says. “The negotiation started on a Sunday afternoon in Sao Paulo, Brazil, and went all through the night and into the wee hours of the morning. When the competition was decided at around 5 a.m., we had won approximately 23 billion dollars of new business over the life of the program. It was the biggest win for my company up to that point.”

Mike Dumais (then president of Sundstrand division, now senior vice president of corporate strategy and development at United Technologies) is more specific. He calls Baker “instrumental” to the company’s winning a wide range of systems on the Embraer. She did that, he says, “by spending countless days in Brazil sitting with the customers, understanding their needs, understanding what type of value proposition we’d need to provide, and she made sure we were on target with our proposal” on the technical side. On the customer side, Dumais says, “I think her personality and the customer’s desire to work with Gail pushed us over the top, and we were able to win content or systems that will result in hundreds of millions of dollars in sales for UTC over the next 20 years.” In both realms, he says, “Gail distinguished herself to the point where very senior leadership of Embraer, one of our major customers, would ask to continue working with Gail.”

Like Dumais, UTAS president Dave Gitlin praises Baker’s unique combination of deep technical expertise with very strong customer-relationship skills. “This gives her the ability to discuss complex technical issues with the customers,” he says, “while building and maintaining long-term relationships that are critical to the future growth of our business.”

Baker began working for Gitlin in 2010, when the aerospace customers and business development organization was formed as part of a broader company reorganization.

“A few years ago,” Gitlin says, “we had a very important customer who was unhappy with our performance on key field issues…. Gail quickly got her arms around the issues, developed a plan to identify the root cause and corrective actions, and personally helped turn the relationship around. Today our relationship with this customer is excellent, thanks in large part to Gail’s efforts.”

For the past 20 years, Baker has served as mentor to men and women, helping guide them through work-life balance challenges, business-development questions, strategy, and personal problems. “I will accept anyone’s invitation for a chat to discuss their career,” she says. “I really didn’t have mentors who ‘looked like me’ when I was coming up the ranks, so I understand how having someone to bounce ideas off can be invaluable.”

Baker says she keeps confidences and carries “no hidden agenda,” and is happy to see and take part in mentee successes. Although she had few business mentors, she did not lack for strong, supportive advisors at WPI: chemistry professor and rugby team advisor Herb Beall, with his wife, Barbara, “often invited our team into their home for social events,” she says. “He had a very insightful way about him and acted as a father figure to us all. He often offered me sage advice and I valued his council.” They remained in touch until his death in 2003.

“Van A [Dean John van Alstyne] was my advisor and professor for diffy Qs [differential equations].

He was one of the first people I met at WPI and we remained friends until his death a few years ago. He had a photographic memory and had the entire course offering and schedule for each class memorized. He essentially did all of the scheduling for each WPI student without a computer. He was also an awesome teacher and managed to keep each class engaged in what could be a challenging and somewhat dry topic.

“Besides his genius, van A had a heart of gold,” she says. “He used to bake cookies for advisees or students if they were in need of moral support, such as during our senior competency exam or some other critical review. In my senior year, I had mononucleosis for the majority of the last two terms and had to finish my MQP and take my competency exam while quite ill. Add to that some health issues in play back home, and I was struggling to keep it all together. I remember the day he presented me with a delicious tray of home-baked chocolate cookies. They were the best cookies I’ve ever had or probably will ever have.

“After I graduated, we kept in touch—and van A sent a birthday gift to each of my children until he passed. Without fail, these gifts showed up exactly on my kids’ birthdays,” she says. “I guess that was another example of his scheduling genius.”

Her WPI experience supported her in expected and unexpected ways. School, she said, helped her understand the importance of learning and working on a team.

“I had great partners for my IQP and MQP.” The former concentrated on asbestos and related illness—she’d developed an interest in the subject during winter and summer breaks, when she worked as a paralegal’s assistant at a law firm that served as lead defense council for a former asbestos manufacturer.

Baker did not always know she would become an engineer. Growing up in West Hartford, Conn., she knew only that she liked math and science. At the all-female University of St. Joseph (then St. Joseph College), she found most of her classmates studying for nursing or teaching careers, and she felt like “a fish out of water.” Physics professor Steve Griffin recommended his own alma mater: WPI.

“When I started at WPI,” Baker says, “I immediately knew it was the right place for me. I was not an oddball there for liking math or science.” She pursued a degree in mechanical engineering “with a slant toward mechanical design.”

Gail Baker’s regrets are few. She’s “traveled the world, meeting with leaders from just about every aerospace manufacturing company, worked with some of the brightest engineers in the industry, learned what leadership is from some really inspirational leaders, and met with policy makers in congress and the armed services while advocating for aerospace initiatives.”

For Baker, balance was hard won—but worth every step. 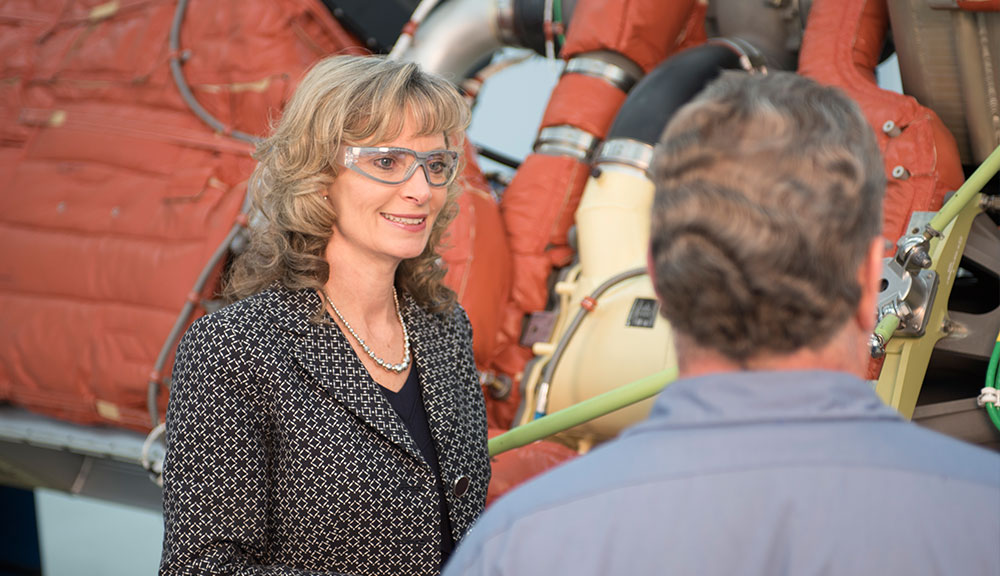 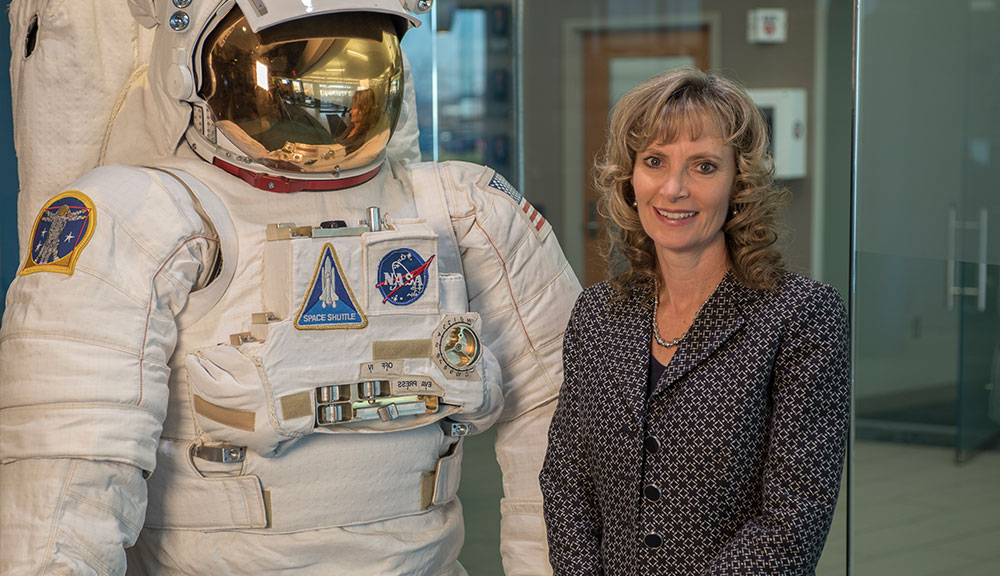