On April 25, the Commonwealth Conversations Tour made a stop at the Massachusetts Academy of Math and Science so state legislators could get a glimpse into the student projects at the school and have the opportunity to hear about the academic endeavors and the future plans of the students behind the award-winning work.

The Commonwealth Conversations Tour began two years ago as a way for state senators to learn more about issues in their own districts and in the districts of their colleagues. Through events like the ones at Mass Academy, Town Hall Forums, and community stops, the tours offer opportunities to meet with residents, leaders in business, and community groups. After the Mass Academy tour, a MassMoves Transportation Forum, hosted by the Barr Foundation, took place at Gateway Park. 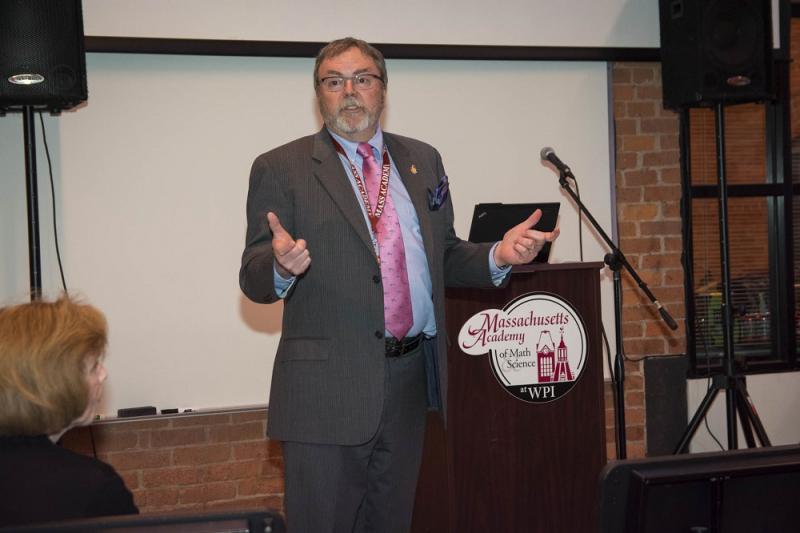 The WPI stops were part of a daylong program that included an end-of-day Town Hall forum with local residents in Worcester. The stop at Mass Academy showed exactly what kind of educational opportunities funding into the public school of excellence provides. Students, who hail from 65 cities and towns in the state, showcased their STEM fair projects so the legislators could see exactly the caliber of work the students at Mass Academy are producing.

“This is important for the representatives and the senators who are funding the school to see the results,” says Michael Barney, director of Mass Academy. “You can put out reports and show data, but it’s not the same as when you actually engage with the students and see them applying what they are learning. It’s an amazing experience to work with these students.”

And what they are working on has little resemblance to a typical science fair. Projects ranged from concussion prevention devices to improving the Newton Square roundabout to preventing animals from being hit by cars using sensors and bioacoustics.

There’s Kevin Hu of Worcester, whose “Unsupervised Analysis of Gene Expression in Neurological Animal Models” project launched him straight into the International Science Fair in Los Angeles this May. His project used computational analysis and methods to try to bring a higher potential success rate for drugs that are tested on mice and used in humans. “I didn’t have much experience in the methods I used, so I took online classes,” Hu says. “The biological aspect and the computational aspect of this are very interesting.” 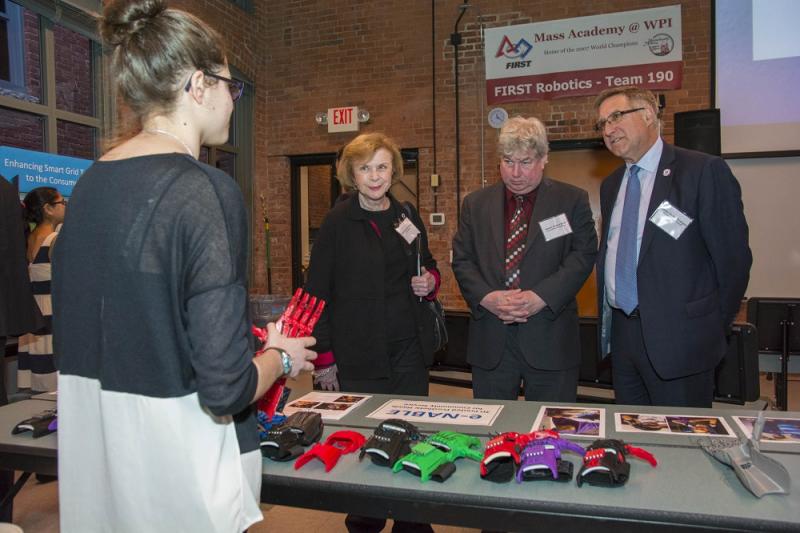 After hearing about a Boy Scout carelessly waving a loaded 12-gauge shotgun in range of a friend of his, Sam Pendergast of Berlin was inspired to create his project, “Firearm Safety: An Automatic Trigger Lock.” His efforts, which he has a provisional patent on and created with the 3-D printer equipment at Mass Academy, led him to create a lock with an infrared sensor, microcontrollers, a battery pack, and a relay board. “I never would have done this at my old school,” he says.

Mass Academy STEM teacher Siobhan Curran says the students at Mass Academy enjoy the challenges the school offers. “A lot of the students come from schools that never asked you to do these things,” she says. “How do you ask the right questions and how do you analyze stuff correctly?”

The tour was hosted by state senators Harriette Chandler, Anne Gobi, Jen Flanagan, Ryan Fattman, and Michael Moore, and many guests came in support of a school that received some initial opposition at its inception 25 years ago.

Kevin O’Sullivan, president of Massachusetts Biomedical Initiatives, was one of several early supporters of Mass Academy when he was a member of the Massachusetts House of Representatives. With 25 years of history, O’Sullivan says Mass Academy has proved to be everything he knew it would be—another public school option for those who were looking for the kind of challenges offered. Bringing Commonwealth Conversations to Mass Academy reaffirms how the confidence in this idea paid off. “My hope would be that they would all want this in their districts,” O’Sullivan says of the representatives. “The vision is to grow this. It’s all about choice.” 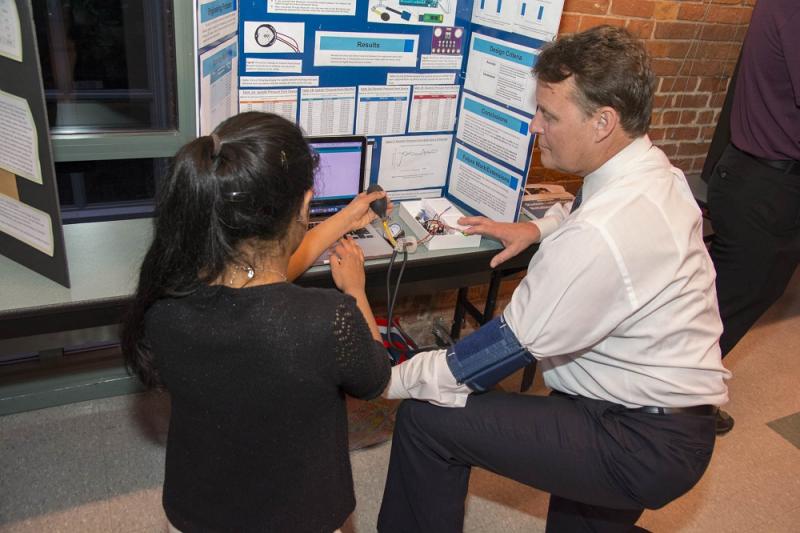 Senator Michael Moore tries on a blood pressure cuff
as part of a demonstration of student Aarthi Sivasankar's
project.

The senators, many of whom were especially interested in the range and the depth of the students’ research, were able to see exactly how the $1.4 million earmarked for the school is used and what kind of education the students are receiving. “This is important because Massachusetts has been funding this for 25 years,” says Chandler. “It’s important for my colleagues and me to see what we are getting. And, frankly, we are blown away by what we are getting.”

And while the academic rigor at Mass Academy is expected, the community makes it a place where the students thrive. “This is a culture where it’s okay to be smart—it’s prized,” says Chandler. “It’s okay to be ahead of the curve here.” After chatting with students, Chandler remarked on her hopes for their trajectories after they have received advanced degrees. “These are our future leaders,” she says. She hopes they can remain in Massachusetts with their innovative products and ideas, and bring their companies to Worcester to continue developing the city’s economy.

“The students can be excited about learning,” says Barney. “That’s what it’s supposed to be like.”