The Guardians of Film

High up in the cramped projection booth that services Upper Perreault Hall in Fuller Labs lives an echo of the movie industry’s past: two vintage Norelco DP70s (AAIIs) film projectors built in the 1950s and donated to WPI by National Amusement Inc. in 1990. The fully functioning analog film projectors—one of only four sets still operating in the state—are lovingly maintained and run by members of Lens and Lights (LNL), the 60-year-old student-run group best known as the audio/visual experts on campus.

The students view their mission to operate and preserve the projectors—and the craft of the projectionist—with pride. Head Projectionist Kyle Mikolajczyk ’22 says he and his compatriots feel a deep responsibility for passing on the specialized knowledge they learned from previous generations of students so the WPI community can continue to experience movies in what they consider the optimal format. 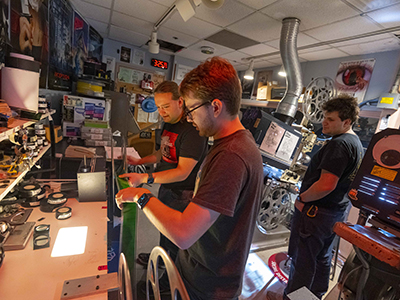 “There is a lot of pride in learning a skill that only a few people still know how to do,” says Mikolajczyk, who joined LNL as a first-year student without any previous knowledge or experience. “We also share an appreciation for what we see as movie viewing perfection.”

The projectors, which can show both 35mm and higher resolution 70mm films, always come in pairs. Only 40 minutes of film can fit onto one giant reel, so about a third of the way into an average two-hour movie the projectionist must start the second machine at exactly the right time for the transition to go unnoticed by the viewing audience, a maneuver known as the changeover. Then, in the darkness of the projection booth, the first machine must be reloaded with the next reel to be started 40 minutes later.

“There’s a real art to it, and a little bit of stress, to get it right,” says Mikolajczyk. In club meetings, LNL members often stage practice races to see who can thread the machines the fastest. Since films are transported from distributors in smaller 20-minute reels, members also must master the ability to inspect and splice the celluloid strips together to form the larger reels before showtime, and then deconstruct them after the show so they can be returned to the distributor.

There’s a homemade operator’s manual and some YouTube videos students can reference in a pinch. But often a shoutout to a forum of LNL students, alumni, and other film projector aficionados will solve problems quickly.

Alyssa Hollander ’16, former head projectionist and current graduate student in the Department of Aerospace Engineering, is always eager to help in those cases.

“I enjoy passing on the knowledge I’ve accumulated—no one student can experience all the problems you might encounter while running the projectors, so it’s nice to have this resource to call upon,” says Hollander. “Once people stop passing along this knowledge, it disappears.”

Because the equipment is old and obsolete, repairs can be costly and parts difficult to find. LNL keeps a third projector in storage that can be cannibalized for parts, and club members often do their own maintenance and minor repair work. But sometimes the students need professional help, such as when the lamphouses and arc lamps had to be replaced recently—an expensive and dangerous task that requires skilled expertise.

Luckily, the group has a guardian angel of sorts in Chapin Cutler, an original LNL member who went on to found Boston Light & Sound (BL&S), a 40-year-old company known nationally as technical experts for the film industry.

Cutler, whose father was a graduate of the Class of 1937, started his educational journey at WPI in 1962, but found the lure of Worcester’s movie theaters to be irresistible. “I was all over the town as a projectionist—you had to be 21 to get a license and I was still a teenager, so I was learning all I could. I was far more interested in hanging around projection rooms than doing my homework.”

He ended up transferring and received a degree from Emerson College, which fit his artistic passions better, as well as a second degree from Wentworth Institute of Technology. In 1977, he and Larry Shaw founded BL&S to perfect a way to show high-quality projections of on-location film dailies.

Although LNL will hire technicians from BL&S for major repairs, club members often attend these service calls so they can ask questions and learn more from the masters.

The Showmanship of Movie Theaters

LNL also operates a digital projector, now the industry standard, out of the same projection booth. But purists say film’s contrast and resolution are far superior to modern digital technology. And in a world where most people watch movies in a home theater, it’s also a throwback to the spectacle of the movie theater days.

“When I started in the business in the 1960s, movies were run in palaces, or single screen theaters, and there was a sense of showmanship that went into the way that shows were presented,” says Cutler. “Lights would go out, the curtain would open, and maybe they'd show a cartoon. The curtain then closed, and someone might be playing an organ. There’d be an overture before the curtains opened and the main feature started—all choreographed, all done by people. It was way more than just pushing an automation button as is done today.

“What LNL is doing, in its own way, is keeping that showmanship alive. It’s become one of my passions, and my company’s passion, to pass on those things that we have learned,” Cutler says. “To me, I’m keeping alive part of what those old Irish guys who came out of the silent film days taught me as an 18-to-20-year-old in those Worcester movie theaters.”

Some old-school directors, such as Quentin Tarantino, create their movies on film and then convert them to a digital format for wider distribution. To celebrate LNL’s 60th anniversary, the group is planning two special Ultra Panavision 70mm showings of Tarantino’s Hateful 8 on Friday, April 29, and Saturday, April 30, both at 8 p.m. The showings pay homage to a 2015 Ultra Panavision 70 roadshow of the movie,  where BL&S helped more than 100 theaters secure the equipment needed to show the film as Tarantino intended.

The Ultra Panavision 70mm format requires a specialized lens attachment—only found at BL&S—that stretches the width of the projection by 25 percent. “We are making the lens attachments available to the students for their showing in April,” says Cutler. “We’ll loan them for as long as they need them.”

Other typical LNL movie productions are not as grand—in fact any faculty member, student, or department can request LNL secure a film from a distributor for an on-campus showing in Upper Perreault Hall in Fuller Labs, as long as they pay for shipping and use rights (typically about $400). For instance, in December the Social Committee requested that LNL show How the Grinch Stole Christmas in 35mm. Mikolajczyk says the group has recently been working to get certified to request films from the Library of Congress—a collection that goes back to the 1900s—opening up new opportunities to show classic movies.

With care, the projectors should continue to meet the needs of the film purists for years to come, according to Cutler.

“As long as they're kept clean and lubricated, the machines will outlive them,” he says. “With a couple of exceptions, there are no parts that cannot be made.”